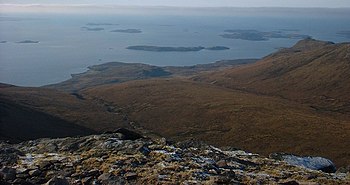 The Summer Isles from Ben Mòr on Coigach

The Summer Isles are a group of islands belonging to Cromartyshire, lying in the mouth of Loch Broom on the west coast of Ross. They form part of the parish of Lochbroom. In Gaelic they are known as Na h-Eileanan Samhraidh, with the exact same meaning as the English.

There is but one inhabited island amongst the Summer Isles, Tanera Mòr, which is also the largest. It is home to an Atlantic salmon fish farm, some rental holiday homes, a café and a post office, which has operated its own local post and printed its own stamps since 1970.

None of the islands has any roads and the only recognisable path is on Tanera Mòr and goes around the Anchorage, the sheltered bay on the east side of the island. Boats sail to Tanera Mòr from Achiltibuie and Ullapool.[1]

The islands are part of the Assynt-Coigach National Scenic Area.

Frank Fraser Darling, an important figure in the development of conservation, lived on Tanera Mòr for two years in the 1930s. His book, Island Years (published 1940), records his time in the Summer Isles, painting Priest Island as a place of great beauty as well as great wildlife.[2]

The Isles in literature

Since 1970 the Summer Isles Philatelic Bureau has been issuing stamps of the islands for tourists who place them on mail to be carried to the nearest GPO Post Box on the mainland.[5][6]

View south, over Altandhu and in Loch an Alltain Duibh, of the Summer Isles. Isle Ristol is in the foreground with Eilean Mullagrach to the right