The Sutherland flag is the flag of the county of Sutherland, registered with the Flag Institute. It was revealed on 14 December 2018 as the winner of competition in which over 3,000 people from the county voted.

The overlaid Saltire and Nordic crosses denote Sutherland's unique history on the mainland where the extent of Viking control met Scotland. The golden sun that is formed where the arms of the crosses meet symbolise the sun raised high in the south for the origin of the county's name South Land as well as the sunrises seen on the east coast and sunsets on Sutherland's west coast. The black recalls the peat of the Flow Country and dark skies and together with the white recall the central colours of the former Sutherland Council arms. 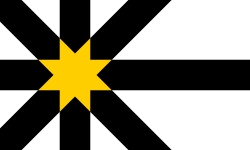 A previous design was announced in the Northern Times newspaper in January 2018 following a competition to devise a county flag, established by the local community in conjunction with the Flag Institute. The design features a swooping eagle, seen face on, against a vertical bicoloured red and yellow background, with the eagle counterchanged yellow and red. The pattern is intended to symbolise the county’s position with both Atlantic Ocean and North Sea coasts. At the hoist are three red stars or mullets. These, plus the red and yellow colour combination, are taken from the arms borne by Hugh de Moray, Earl of Sutherland. The design is an amalgamation of three submissions to the competition which were amalgamated by a committee formed of local dignitaries, schoolchildren and representation from the Flag Institute. “The eagle featured prominently on a considerable number of the entries, indeed much more so than the wildcat. Its current prominence in many parts of Sutherland was selected as a unifying factor across the county. Since the overwhelming factor in the design was ‘unity’, this is provided by the eagle.” The bicoloured eagle illustration (red part on yellow and yellow part on red) reflects the two species of raptor present in the county, the red being a sea eagle, the yellow, a golden eagle as detailed above. Combining the two also emphasised a sought-for county “unifying” factor.

Unfortunately, the flag was not popular, and a public vote was held pitting the design against three others, which led to the adoption of the present flag.

This Sutherland article is a stub: help to improve Wikishire by building it up.
Retrieved from "https://wikishire.co.uk/w/index.php?title=Flag_of_Sutherland&oldid=61598"
Categories: