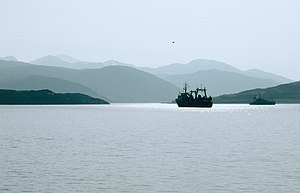 Loch Broom is a sea loch indenting the west coast of Wester Ross in the Highlands, its shores lying in Ross-shire and Cromartyshire. It gives its name also to the parish of Lochbroom.

The small Cromartyshire town of Ullapool lies on the eastern shore of the loch.

The name of Loch Broom may apply to the narrow ribbon of water between Coigach and the Scoraig peninsula, but it is also used of the wider bay beyond it opening into the Minch. This wider part of Loch Broom, bounded by Coigach to the northeast, is beautified by the Summer Isles.

A sister loch, Little Loch Broom, lies just to the south, the other side of the Scoraig peninsula, and opens into the wider loch.

The name “Loch Broom” may be from the Gaelic Loch Bhraoin, meaning "loch of rain showers", or a reference to the spreading yellow gorse or broom which beautifies the loch shore.

Loch Broom is fed by the River Broom which rises in the Dirrie Mountains. Issuing from two lochs, Loch Bhraoin and Loch Droma. Loch Bhraoin feeds the river Abhainn Cuileig which is joined by the Allt Breabaig stream that rises in Sgùrr Breac to the south. Loch Droma feeds the river Abhainn Droma. The two rivers join close to Cuileig Power Station, 4¾ miles southeast of Loch Broom, passing Leal Forrest before joining the loch as a fast flowing river with a strong current. Loch Broom proper, the narrow sea loch, has its head by Inverbroom. It is a ribbon of water 9½ miles long between the mountains of Wester Ross on the east / northeast and the Scoraig peninsula to the west / southwest. Ullapool, Cromartyshire’s largest town, stands on the northeast shore here where the shoreline juts out to narrow the loch.

Some 3½ miles below Ullapool, Loch Broom opens out into the Minch. The loch mouth is overseen by the headland of Cùl á Bhogha, beyond which is Loch Kanaird, a sea loch to the northeast closed in by Isle Martin. Opposite Isle Martin scooped from the shoreline of the Scoraig peninsula to the west is Annat Bay.

Opening into the wider loch are Little Loch Broom, separated from Loch Broom proper by the Scoraig peninsula, and Gruinard Bay in the south. The loch out here opens to a width of 12½ miles, reaching 7 miles northwest to southeast. Here are found the Summer Isles.

Beinn nam Ban at 1,903 feet is at the base of the peninsula and overlooks Dundonnell to the southwest and Loch Broom to the west and south.

Lying southwest of Dundonnell, ovelooking Little Loch Broom, and Gruinard Bay and Gruinard Island, to the northwest, lies the majestic ridge of An Teallach, with ten munros; peaks over 3,000 feet. An Teallach means "The Anvil" or "The Forge".