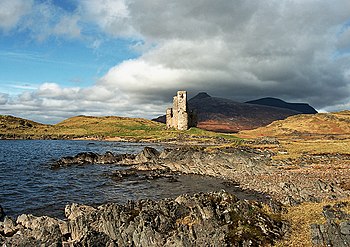 Assynt (Gaelic: Asainte) is an area in western Sutherland, on the west coast, north of Coigach. Though a wide area, it constitutes a single parish of just 1,021 population.

The name Assynt may derive from an Old Norse word 'A-ssynt meaning 'seen from afar' and/or from Ass which is Old Norse for 'rocky'. There is also a local legend that the name comes from a fight between the two brothers Unt and Ass-Unt, (meaning 'Man of Peace' and 'Man of Discord'). The latter having won the tussle gave his name to the parish.[1]

Assynt is famous for its wild landscape and its remarkable mountains, amongst which are Quinag, Canisp, Suilven, Cùl Mòr, Stac Pollaidh, and the greatest of them, Ben More Assynt, the highest point in the county.

Ben More Assynt is Sutherland's county top; a mountain climbing to a height of 3,274 feet and thus a munro. Assynt contains two of Sutherland's four munros; Ben More Assynt and Conival. The higher slopes of Ben More are capped by light coloured quartzite boulders, giving it a distinctive appearance. A great area of land around Ben More Assynt has been declared a Site of Special Scientific Interest because of its geological interest and rare plant species

Away from the munros are some of Assynt's better known and more dramatic if less lofty mountains such as Suilven.

In Assynt is the longest cave in Scotland, Uamh an Claonaite, which is to be found five miles south of Inchnadamph.[4]

In June 2005 the Glencanisp estate, including the mountains Suilven and Canisp and the neighbouring Drumrunie estate, with the mountains Cùl Mòr and Cùl Beag, were bought by the local community.[5] The Assynt Foundation aims to create local employment and safeguard the natural and cultural heritage for the benefit of the community and future generations, and for the enjoyment of the wider public. The estates of Glencanisp and Drumrunie totalling some 44,500 acres (18,000 ha) are managed by the Assynt Foundation on behalf of the Assynt community. 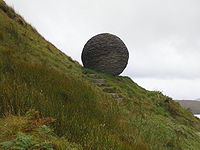 The Globe at Knockan Crag

In 1989, the northwest portion of the Assynt estate was renamed the North Lochinver Estate and put on the market by its owners, the Vestey family. This area consisted almost entirely of crofting land, with 13 crofting townships being set up during the Highland Clearances. The purpose of the sale was to raise money for the owners to buy more hill ground suitable for deer stalking. The estate was purchased by Scandinavian Property Services Limited. Three years later, the company went into liquidation. The North Lochinver Estate was divided into seven lots and put up for sale.[6][7] The sale was handled by an Edinburgh based estate agent, John Clegg and Co.[8]

The proposed break-up of the estate was a cause of concern for the crofters as the boundaries of the lots cut across grazing land, creating the possibility of some crofters having to deal with more than one landlord. The crofters also believed that some of the portions would be directly administered by the owners, rather than a professional factor.[9]

The Assynt branch of the Scottish Crofters Union met on the 6 June 1992, and decided to attempt to raise enough money to buy the estate and run it themselves.[10][11] and founded the Assynt Crofters' Trust, open to crofters within the estate. Money came in from crofting family and various public bodies donating taxpatyers' money; Highlands and Islands Enterprise, Scottish Natural Heritage and the local council, and some from a public appeal. The local Member of Parliament, Robert Maclennan whose ancestors had been expelled from their homes during the Highland Clearances gave £1,300; £50 for every year he had served as an MP.

The trust's bid were rejected until until they made a final bid of £300,000, and on 1 February 1993, Assynt Crofters' Trust became the owners of the North Lochinver Estate, which they renamed the North Assynt Estate.[12] 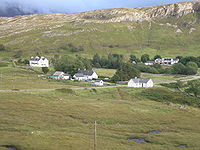 Villages and hamlets in Assynt include: