From Wikishire
(Redirected from Atlantic)
Jump to: navigation, search 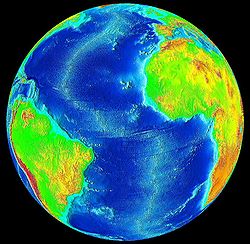 The Atlantic Ocean is the second-largest of the world's oceans. It lies to the west of the British Isles and reaches southward to the Falkland Islands and the Southern Ocean. With a total area of about 41,000,000 square miles,[1] the Atlantic Ocean covers approximately 20% of the Earth's surface and about 26% of its water surface area.

The oldest known mention of "Atlantic" is in The Histories of Herodotus around 450 BC (Hdt. 1.202.4): Atlantis thalassa (Greek: Ἀτλαντὶς θάλασσα) or "Sea of Atlas", a name shared with the Atlas Mountains in North Africa. The term "Ethiopic Ocean", derived from Ethiopia, was applied to the southern Atlantic Ocean as late as the mid-19th century.[2] Before Europeans discovered other oceans, the term "ocean" itself was the term for the waters beyond the Strait of Gibraltar that we now know as the Atlantic. The early Greeks believed this ocean to be a gigantic river encircling the world, known as "Oceanus".

In Welsh, the Atlantic is known as the Cefnfor yr Iwerydd (literally "the Ocean of the Irish"), and in Gaelic Cuan Siar ("Western Ocean") or An tAigéan Atlantach.

In Old English texts it appears as the garsecg[3] (a name translating the Latin oceanus) and may be meant by the occasional word westsæ.

Lands within the ocean

British territories within the Atlantic Ocean are: 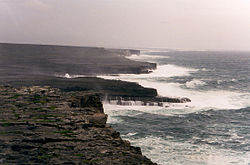 The Atlantic Ocean beats on the shore of the Aran Islands

The Atlantic Ocean lies to the west of the British Isles, and it marks the rougher, storm-beaten coast of these islands. A broad ocean, it is bounded by North and South America in the west and in the east by Britain and Ireland, Europe, the Strait of Gibraltar (beyond which is the Mediterranean Sea) and Africa. In the north, the Atlantic is divided from the Arctic Ocean by the Iceland and the Danish and Norwegian islands, and in the south beyond the Falkland Islands and South Georgia is the Southern Ocean.

In the southeast, the Atlantic meets the Indian Ocean around the Cape of Good Hope. In the southwest it meets the Pacific Ocean in the notorious, stormy Drake Passage around Cape Horn. A more peaceful passage to the Pacific is made through the Panama Canal; before that canal opened, Stanley in the Falklands was a boomtown as the last civilised port before the Horn.

Seas subsidiary to the Atlantic Ocean include the Mediterranean Sea, the Caribbean Sea, the Gulf of Mexico, Hudson Bay, the North Sea and the Baltic Sea.

The depth of the ocean varies wildly. The Mid-Atlantic Ridge separates two troughs either side. Deep trenches cut into the seabed, such as the South Sandwich Trench, which reaches a depth of 4,600 fathoms.

The number of islands in the Atlantic is innumerable:

The Mid-Atlantic Ridge separates the Atlantic Ocean into two large troughs with depths from 2,000 – 3,000 fathoms. The ridge is formed at the meeting of tectonic plates, and is alive with volcanic and seismic activity, gradually widening the ocean.

The Atlantic Ocean appears to be the second youngest of the five oceans. It did not exist until 130 million years ago, when the continents that formed from the break-up of the ancestral super continent Pangaea were drifting apart from seafloor spreading, a process which continues. The Atlantic has been extensively explored since the earliest settlements along its shores.

The Norwegians and their colonists first crossed the Atlantic but made no permanent settlement in America. Christopher Columbus made the first acknowledged crossing which opened the ocean and the New World for the first time (notwithstanding persistent rumours that the merchants of Bristol had been trading with the Red Indians of North America for some years before). After Columbus, European and English exploration rapidly accelerated, and many new trade routes were established. As a result, the Atlantic became and remains the major artery between Europe and the Americas. 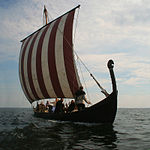 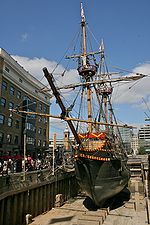