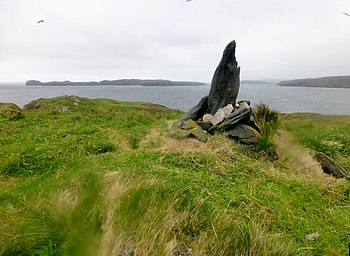 The Rabbit Islands are a group of four small, uninhabited islands off the north coast of Sutherland, at the mouth of Tongue Bay, as it enters the Atlantic Ocean. The islands appear invitingly from the north coast road and the Kyle of Tongue Bridge. In Gaelic they are known as Eileanan nan Gall.

The name 'Rabbit Islands' is an accurate description: they are uninhabited by man but populated by rabbits. 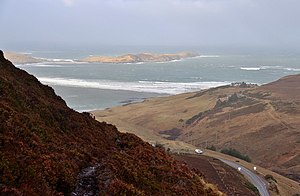 The Rabbit Islands from Cnoc an Fhreiceadain

The islands consist of sandstone and have sandy soil which is ideal for rabbit burrows. The islands' modern name derives from the many rabbit burrows here in consequence.[1] They are fairly low-lying, slender in shape, and along with the surrounding 'fjord' of Tongue Bay, they show the effects of former glaciation.

There are three main islands, the largest of them left unnamed on maps. The largest island is joined to the mainland of Sutherland, on the west side of the Kyle, at low tide by a sand bar and mud, and the next joined likewise by sand at the ebb to its neighbour. The northernmost of the Rabbit Islands, Sgeir an Òir, has a natural arch at its north end wrought by the Atlantic waves called "Claigeann na Sgeir" ('Bell of the Skerry').

The islands lie off shore near Coldbackie, Melness and Talmine on the mainland, and Eilean nan Ròn is to the northeast, in the parish of Tongue.[1]

Supposedly, a ship carrying gold to Charles Edward Stuart was wrecked on the island.[2] The northernmost of the group is called Sgeir an Òir (skerry of the gold), which is perhaps a reference to this.

Currently, the islands are popular with scuba divers, and have in the past been used for grazing.