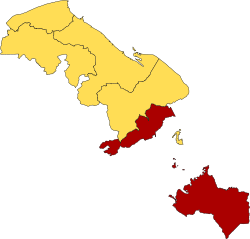 The Hundred of Maylor or Maelor is one of the hundreds of Flintshire, in the south of the county. As well as part of the main body of the shire, the hundred also includes the Maelor Saesneg detached part. It is bounded by Mold Hundred to the north; by Cheshire to the east; and by Shropshire to the south. The detached parts are separated by the intervention of Denbighshire. It is the second least-populous of Flintshire's hundreds with a population of 17,698.