From Wikishire
(Redirected from Bangor is-y-Coed)
Jump to: navigation, search

Bangor-on-Dee is a village and parish in the ancient district of Maelor Saesneg in Flintshire, situated on the banks of the River Dee.

The commonly used anglicised name refers to the village's proximity to the River Dee. However, the traditional Welsh language name is Bangor-is-y-Coed, literally meaning "Bangor (i.e. a settlement within a wattle fence) below the wood/trees". This form was first recorded in 1699, while an alternative name of the parish, "Bangor Monachorum" ("Bangor of the monks"), is first recorded in 1677.[2]

A monastery was established at Bangor in about AD 560 by Saint Dunod and was an important religious centre in the 5th and 6th centuries. This monastery was destroyed in about AD 616 when Æthelfrith, the King of Northumbria, defeated the Kingdom of Powys at the Battle of Chester. The scholar Bede wrote that 1200 monks were slaughtered before the attack.[2] More than a millennium later, the massacre was recounted in a poem entitled "The Monks of Bangor's March" by Sir Walter Scott, and put to music by Ludwig van Beethoven. Today no trace of the monastery remains and even its site is uncertain.

The settlement at Bangor is nevertheless likely to have continued after this date, although it was not mentioned in the Domesday Book. A village was certainly in existence by 1300, when the present church is believed to have been built.[2] By the late 1690s, the historian Edward Lhwyd recorded that the village still had only 26 houses, but by the end of the 19th century it had significantly expanded, including a free school, coaching inn, a shop, further houses and a brewery.[3]

The five-arched stone arch bridge across the River Dee dates from about 1660 and it is believed to have been built by Inigo Jones. A 1903 suspension bridge by David Rowell & Co. is nearby at Pickhill Meadows. 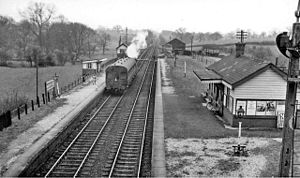 The former railway station as it was in 1962

Bangor had a station on the Cambrian Railways' Wrexham to Ellesmere line which crossed the River Dee via an iron bridge to the north of the village. This line was opened in 1895 and ran through an entirely rural area. The line closed for passenger services in 1962. Today there is only a local bus service that runs to the nearby towns of Wrexham and Whitchurch.

South-west of the village there is Bangor-on-Dee racecourse, a National Hunt racecourse. There are also two lively pubs, a basketball court and river activities such as fishing and rafting.