This is gentle hill country, a green landscape, well wooded and well grazed on the open slopes and valleys. The chief landowner (once holding third of the shire) is the Duke of Buccleuch.

The land between the Ettrick and the Tweed was formerly covered with forest to such an extent that the shire gained an alternative name; Ettrick Forest, a royal hunting forest populated by the oak, birch and hazel and by red deer. King James V, however, would forego the sport to let the land for grazing, earning a better income, and thus vast stretches of woodland became pasture for sheep, leaving today little of the once mighty woodland.

Almost the whole of Selkirkshire is hillside and its only low ground is in the dales watered by its larger rivers. 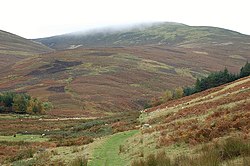 The hills of Selkirkshire are not the harsh forbidding slopes of northern shires but rounded and green. The highest hills are found in the extreme west and south-west.

The highest hill, the county top is Dun Rig amongst the Manor Hills, its gentle slopes reaching to 2,441 feet above sea level, on the border of Peeblesshire. The grandest peaks here are:

In the north, close by Midlothian, is

By the Dumfriesshire border stand: 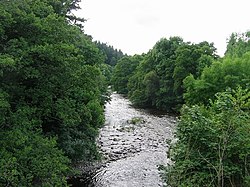 The River Tweed crosses through the north of Selkirkshire for a few miles. The longest stretches of river in the county though are the Ettrick, 32 miles long and the Yarrow Water of 14 miles. The Yarrow is famed and the subject of poems and ballads.

The main dales are those of the Tweed, the Yarrow and the Ettrick (Ettrickdale).

Midlothian' stream, the Gala Water falls into the Tweed a little below Galashiels.

There are no great lochs in Selkirkshire but St Mary's Loch and adjoining it the Loch of the Lowes are big and remarkably prettily set. Many smaller waters are found in the south-east.

While the Romans ruled south of Hadrian's Wall, it is reported that the Gadeni tribe held Ettrick Forest, though little sign of settlement has been found of that time, and no Roman remains as there are in neighbouring shires. Nevertheless, at Torwoodlee, north-west of Galashiels, are the ruins of the only example of a broch in the Middle Shires; 75 feet in diameter within an enclosed court of 40 feet in an enclosure of mounds and a ditch and a further an outer entrenchment. Of the sub-Roman period to which the broch may relate, little is known. Some Arthurian connections are made; the battle of Coit Celidon (the Wood of Celidon) is said by some to refer to the Ettrick Forest, and by extension mayhap the Battle of Guinnion was in the valley of the Gala Water.

The forest was ceded to Scotland at some time in the Middle Ages and became a Royal forest, hunted by the King and court. The first known sheriff was Andrew de Synton, appointed by William the Lion (who died in 1214). Under King Edward I of England, Selkirk's burgesses swore allegiance to King Edward and the forest was granted to the Earl of Gloucester. However Wallace too was here, concealing himself in the forest to organise his attacks on the King's forces, and Selkirk archers formed a body in his army when it invaded England. Later, the Earl of Pembroke assumed the hereditary sheriffdom. Under and after King Robert I (Robert the Bruce), the Earls of Douglas, and later Earls of Angus administered the county on behalf of the Crown, until the Union of the Crowns in 1603.

Folk ballads written of the county commemorate the Battle of Philiphaugh in 1645, the 'Dowie Dens' at Yarrow and Tibbie Shiels at St Mary's Loch.

Selkirkshire was one of the unquiet border shires, wracked by the violence of the reivers. It was the vigorous King James V who took the matter in hand, appointing keepers to each district until in 1529 he could bring the ringleaders to justice at the end of a rope, amongst them William Cockburn of Henderland, Adam Scott of Tushielaw and the notorious Johnnie Armstrong. After the union of the crowns in 1603 the reivers were finally put down by Dunbar, for whom now there was no border to hinder the pursuit of justice.

The Covenanters held many conventicles in the uplands, and their general, David Leslie, routed the Marquis of Montrose at Philiphaugh in 1645. 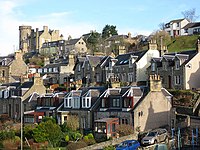 There are just two towns of any size in Selkirkshire:

Selkirkshire has two outlying parts: the larger, locally in Roxburghshire, is bounded at the north by the Ale Water, east of the village of Ashkirk, and contains the small settlements of Whinfield and Synton. The other, locally in Peeblesshire, consists of the land that lies between the hills of Priesthope, Glede Knowe and Scawd Law.

Things to see in Selkirkshire 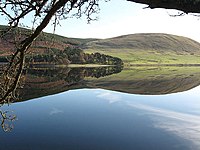