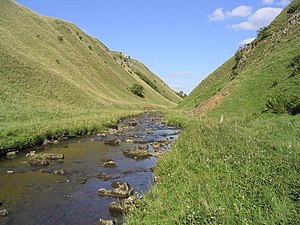 The Ale Water in Leap Linn

The river rises at Coutlair Knowe (1,371 feet) in Selkirkshire and flows down from the forest eastwards soon to mark the boundary with Roxburghshire for some distance, before re-entering Selkirkshire. Soon it enters Alemoor Loch, which was a natural lake but which has been expanded by damming the river here to create a reservoir.

Below the dam, the Ale Water meanders amongst the tumble of hills hereabouts and below Wester Rig it takes another turn at marking the county boundary for a mile or so before decisively entering Roxburghshire.

The Ale Water passes under the A7 at Ashkirk and later comes to Lilliesleaf, a few miles below which it bends its course to the southeast.

The Ale meets the River Teviot south of the village of Ancrum.

The river's name was originally "Alne".