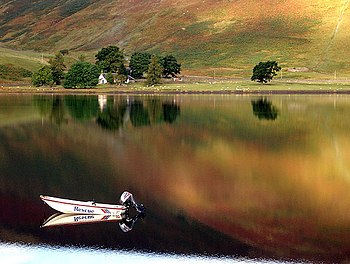 St Mary's Loch is a freshwater loch on the border of Peeblesshire with Selkirkshire. It is the largest natural loch in either county, and may be found lying is situated between Selkirk and Moffat, passed by the A708 road.

A small village, Cappercleuch, stands at the north-west corner of the loch.

The loch takes its name from a church dedicated to St Mary which once stood on its northern shore, although only the burial ground is now visible.

Local legend has it that the loch has no bottom, and it is reputed to be the coldest loch in Scotland.

Immediately upstream from St Mary's Loch is the smaller Loch of the Lowes. Between the two is Tibbie Shiel's Inn, an 18th-century coaching inn, which was frequented by the Border poet James Hogg (1770–1835).[1] A statue of Hogg stands close to the inn.

The Southern Upland Way and Sir Walter Scott Way long-distance walking routes both pass the shores of the loch. 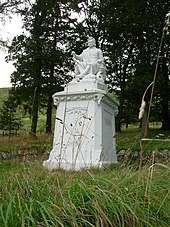 James Hogg monument by the loch