Bowhill House is a grand country house near Bowhill in Selkirkshire close by the county town, Selkirk. It is a member of the Historic Houses Association, and is one of the homes of the Duke of Buccleuch.

The house is protected as a Category A listed building,[1] and the grounds are listed on the Inventory of Gardens and Designed Landscapes in Scotland.[2] 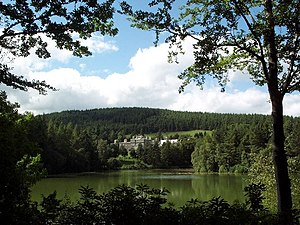 Bowhill House across the Upper Loch

Bowhill was built in 1708 by John, Lord Bowhill. His brother William Murray had bought the land earlier in 1690. In 1747, Francis Scott, 2nd Duke of Buccleuch, bought Bowhill for his son Lord Charles Scott who wanted to stand for Parliament in Roxburgh or Selkirk.

In 1767, Henry, the third Duke, started to plant forests in the grounds, and in 1800, the 4th Duke, Charles started to revamp what was an occasional summer house and turned it into a villa with gallery hall. Walter Montagu Douglas Scott, the 5th Duke of Buccleuch, made many changes and, in 1831, moved the entrance from south to north. The building was finally completed in 1876 when it was 437 feet long.

Bowhill House is home to part of one of the world's greatest private art collections. In the dining room are works by Canaletto, Gainsborough, and Reynolds.