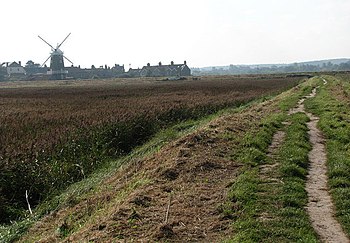 The Peddars Way near Cley, Norfolk

The Peddars Way is a long distance footpath in Norfolk, and a short stretch in Suffolk. It is 46 miles long and follows the route of a Roman road.

It has been suggested by more than one writer that the road was not created by the Romans but was an ancient trackway, a branch or extension of the Icknield Way, used and remodelled by the Romans.[1] The name is said to be derived from the Mediæval Latin pedester – on foot. It is first mentioned on a map of 1587 AD

This is one of four long distance footpaths which, when combined, run from Lyme Regis to Hunstanton and are referred to as the Greater Ridgeway. At Knettishall Heath the Peddars Way links with the Icknield Way Path for 110 miles south west to Ivinghoe Beacon in Buckinghamshire.[2]

A detailed 144-page guide, including 1:25 000 maps from the Ordnance Survey, and described south to north, is published in the series of National Trail Guides.[3] The trail is very well marked with two general types of waymarker along the length of the route. At junctions there are signs marked ‘Peddars Way’ on plain wood fingerposts. Elsewhere white, yellow and green discs are used bearing the acorn sign used on such long distance routes.

The Peddars Way was traditionally supposed to be a haunt of the ghostly East Anglian hound, Black Shuck.[4][5]