Snettisham is a village in Norfolk. It is near the west coast of the county, some five miles south of the seaside resort of Hunstanton and nine miles north of King's Lynn.

The Snettisham coast around the reserve is often said to be "where Norfolk stares at Lincolnshire". This is because, unlike much of Norfolk's coast where the sea stretches to the horizon, Snettisham looks across the square-mouthed estuary of The Wash at the coast of Lincolnshire, only fifteen miles away.

About the village and parish

The River Ingol runs to the south of the village upon which stands the now disused Snettisham watermill.

Though traces of the station and railway line can still be seen the service which was opened in 1862 was terminated in 1969.

Snettisham RSPB reserve, on the coast of The Wash some two miles west of Snettisham village, is a nature reserve in the care of the Royal Society for the Protection of Birds. It consists of bird lagoons and bird observation hides, including a rotary hide.

St Mary's Church in the village has a 14th-century spire 172 feet high. Nikolaus Pevsner called it "perhaps the most exciting decorated church in Norfolk". 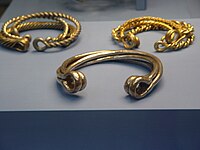 The Snettisham Hoard is a series of discoveries of Iron Age precious metal, including nearly 180 gold torcs, 75 complete and the rest fragmentary, found in the area between 1948 to 1973.

In 1985 there was also a find of Romano-British jewellery and raw materials buried in a clay pot in AD 155, the Snettisham Jeweller's Hoard. Although this latter find has no direct connection with the nearby Iron Age finds, it may be evidence of a long tradition of gold- and silver-working in the area.[1][2]

Snettisham has a complex entry in the Domesday Book where it is divided in ownership between William de Warenne and the Bishop of Bayeux. Related berewicks are West Newton and Castle Rising, moreover Weston Longville is said to be in Snettisham's valuation.

The name of the manor is spelt in four different ways, two very similar to the present pronunciation, one of Snesham and one of Nestesham.[3]