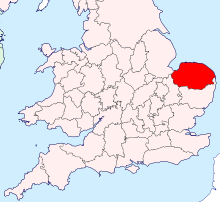 The Norfolk flag is the flag of the county of Norfolk, registered with the Flag Institute on 11 September 2014.[1]

Norfolk’s flag is the armorial banner of the arms attributed to the first Earl of Norfolk Ralph (Ranulph) de Gael (de Guader). This 12th-century design has been associated with the county ever since, appearing on maps and books and of course forming the basis of the county council arms awarded in 1904. In 2014 a campaign to see this anciently linked, traditional emblem of the county, was led by Norfolk native, Dominic Victor Maverick Smith who also perfected the exact pattern of the ermine bend that runs from corner to corner across the flag, in consultation with the Flag Institute. The design was already in use amongst local sailing associations and had been adopted for its own set of arms by the county heraldry society. Having secured the support of such prestigious organisations as the Broads Authority and the Norfolk Family History Society this traditional flag of the county was duly registered by the Flag Institute on 11 September 2014.