Wymondham Abbey is the parish church for the town of Wymondham in Norfolk, within the Diocese of Norwich within the Church of England. It is a remarkable church, for its size (in a very modest town) and the richness of its decoration.

This is an ancient church originating as a monastery church, hence its name, but a lively, active modern congregation.

Today the Abbey serves as the parish church of Wymondham, but it started life as a Benedictine priory.

The monastery was founded in 1107 by William d'Aubigny, Chief Butler to King Henry I. William was a prominent Norfolk landowner, with estates in Wymondham and nearby New Buckenham. The d'Albini (or d'Aubigny) family originated from St Martin d'Aubigny in Normandy. Later, the founder's son, William d'Aubigny, 1st Earl of Arundel, in 1174 founded Becket's Chapel close by in the town, to be served by two monks from the Priory.[1]

William d'Aubigny was buried in the abbey, as were his son, the 1st Earl of Arundel, and indeed the first five earls of Arundel. 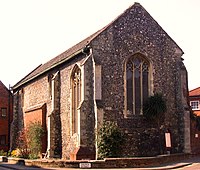 William d'Albini's monastery was a dependency of the Benedictine monastery at St Albans, where his uncle Richard was Abbot. Wymondham Priory was relatively small, initially for some twelve Benedictine monks, but grew in influence and wealth over the coming centuries. Disputes between the Wymondham and St. Albans monks were quite common, and in 1448, following a successful petition to the king, the Pope granted Wymondham the right to become an Abbey in its own right. A notable abbot was Thomas Walsingham. 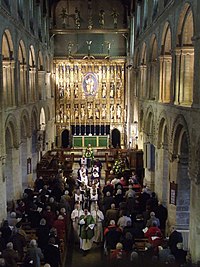 The monastery church was completed by about 1130, and originally was dedicated to the Virgin Mary. Later, following the murder of Saint Thomas Becket in 1170, Becket's name was added to the dedication. A modern icon panel by the late Rev. David Hunter is on display in the church and tells the story of Thomas's life in pictures. In 1174, the founder's son, also called William d'Aubigny, established a chapel in the town dedicated to Becket and served by two monks from the priory. The church was originally cruciform in shape, with a central tower and twin west towers. When it was built, stone from Caen in Normandy was shipped specially across the English Channel to face the walls. The central tower was rebuilt in about 1376 by a tall octagonal tower (now ruined), which held the monks' bells. In 1447, work on a much taller single west tower began. This replaced the original Norman towers and held the townspeople's bells. From the start, the church had been divided between monks' and townspeople's areas, with the nave and north aisle serving as parish church for the town (as it still is). This, too, was from time to time the cause of disputes which occasionally erupted into lawlessness, though the Vicar of Wymondham was appointed by the Abbot.

King Henry VIII's Dissolution of the Monasteries brought about the closure of Wymondham Abbey, which was surrendered to the King in 1538. The monks had, apparently willingly, already signed the Oath of Supremacy, and were given generous pensions - Elisha Ferrers, the last Abbot, became Vicar of Wymondham (the fine sixteenth century sedilia on the south side of the chancel is said to be his memorial). The years following the dissolution saw the gradual demolition of the monastic buildings for re-use of the stone. The eastern end of the church (blocked off from the nave by a solid wall since about 1385) was destroyed, leaving the present church at 230 feet) only about half its original length. Repairs to the church were carried out following Queen Elizabeth I's visit in 1573: the date and initials may be seen on exterior stonework.

Notable features of the church are the twin towers (a landmark for miles around), the Norman nave, the splendid 15th century angel roof in the nave and fine north aisle roof.

The church is also remarkable for its high quality fittings such as the 1783 organ by James Davis and 1810 chamber organ (also by James Davis) and the splendid gilded reredos or altar screen, one of the largest works of Sir Ninian Comper. This was dedicated in 1921 as a war memorial, though the gilding was not finished until 1934. Also found about the church are an early Tudor terracotta sedilia, a Georgian candelabrum and the Royal Arms of George II. The church has a carved mediæval font with modern gilded font cover, and many smaller features such as angels, musicians and figures carved on the roof timbers and corbels. The west tower houses a peal of 10 bells, re-cast and re-hung in 1967. Hung in the bell tower are six well-preserved 18th century hatchments. 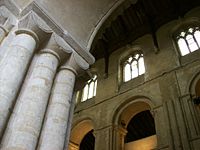 Norman pillars in the nave