From Wikishire
(Redirected from County Tyrone)
Jump to: navigation, search

The County of Tyrone is a shire in Ulster. A large county though sparsely populated, it stretches from the border with County Donegal in the west, to the south-western shore of Lough Neagh in the east, bordering County Londonderry in the north and Fermanagh in the south. Within its 780,000 acres dwell 166,516 people.

The county town of Tyrone is Omagh in the midst of the shire. The county flower is bog-rosemary, which blooms in the peat bogs. 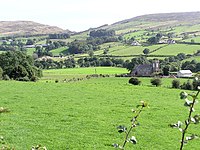 Tyrone is the largest county in Northern Ireland, spreading over 1,218 square miles of farm, moor and mountain. The length of the county, from the mouth of the River Blackwater at Lough Neagh to the western point near Carrickaduff Hill is 34 miles. The breadth, from the southern corner, southeast of Fivemiletown, to the northeastern corner near Meenard Mountain is 23 miles.

The flat peatlands of eastern Tyrone border the shoreline of the largest lake in the British Isles, Lough Neagh. The land rises gradually across to the more mountainous terrain in the west of the county, the area surrounding the Sperrin Mountains. The highest point is Sawel Mountain, standing at 2,224 feet.

The Sperrins dominate the interior of the county and though they spread across into Londonderry they are at their highest most spectacular here. The mountains have been designated Area of Outstanding Natural Beauty.

Annaghone claims to be the geographical centre of Northern Ireland.

The name Tyrone is derived from the Irish Gaelic Tír Eoghain, meaning "Land of Eoghan". This Eoghan was, it is generally believed, Eógan mac Néill, the son of king Niall of the Nine Hostages, and brother of Conall Gulban, who gave his name to the kingdom of Tír Chonaill (Tyrconnell).[1] Historically it was anglicised as Tirowen or Tyrowen, which are closer to the Irish pronunciation. 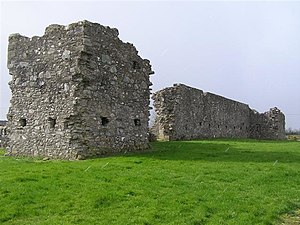 Castlederg Castle ruins, on the site of an O'Neill stronghold

The historical land of Tír Eoghain stretched as far north as Lough Foyle, and formed part of modern-day County Londonderry east of the River Foyle. The majority of County Londonderry was carved out of Old Tyrone between 1610-1620 when that land was granted to the Guilds of London to as part of the Plantation of Ulster.

Tyrone was the traditional stronghold of the various O'Neill clans and families, the strongest of the Gaelic Irish families in Ulster, surviving into the seventeenth century. The ancient principality of Tír Eoghain, the inheritance of the O'Neills, included the whole of the present counties of Tyrone and Londonderry, and the four baronies of West Inishowen, East Inishowen, Raphoe North and Raphoe South in County Donegal.[1]

Tyrone was one of the officially planted counties in the seventeenth century Plantation of Ulster.

Omagh, the county town, is the county's only sizable town.

*: Extends into County Armagh.
†: Extends into County Londonderry.
Additionally parts of the parish of Aghalurcher, Artrea, Ballinderry, Errigal Trough, Learmount and Tamlaght extend into Tyrone. Two townlands of the Fermanagh parish of Magheracross form a detached part of that parish and county locally situate in Tyrone.