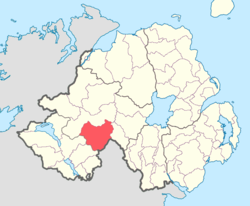 Location of the Clogher barony

Clogher (named after the village of Clogher) is a barony of County Tyrone.[1] It is bordered by four other baronies in the United Kingdom two in the Republic of Ireland: Omagh East to the north, Dungannon Lower to the east, Magherastephana to the south and Tirkennedy to the southwest, and over the border to the southeast are Trough and Monaghan.

The barony of Clogher was a territory formerly known as Kinel Ferady, after the clan named the Cenél Fearadhaigh, a branch of the Cenél nEóghain.

The baronies of Ulster were created around 1585, and after the general manner, the old lands of the Kinel Ferady were named after the principal town or castle of the barony, hence Clogher.[3]

The civil parishes in Clogher barony are:[4]