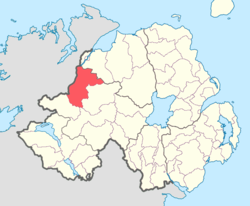 Strabane Lower (named after Strabane) is a barony of County Tyrone.[1] It is bordered by five other baronies in Northern Ireland: North West Liberties of Londonderry to the north; Tirkeeran to the north-east; Strabane Upper to the east; Omagh East to the south; and Omagh West to the south-west.[1] It also borders two baronies in the Republic of Ireland: Raphoe North and Raphoe South to the west.

Strabane is the single town in the barony of Strabane Lower. The villages are:

The civil parshes in Strabane Lower are:[2]