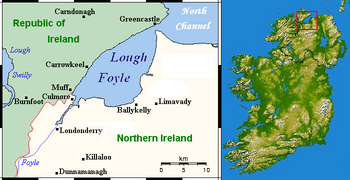 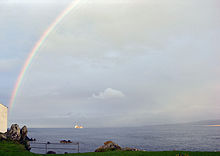 Lough Foyle is a sealough which forms the estuary of the River Foyle in Ulster. It starts where the Foyle leaves Londonderry. It separates the Inishowen Peninsula in County Donegal, Republic of Ireland from County Londonderry in Northern Ireland.

At the end of the Second World War, the remnant of the German Atlantic U-boat fleet (which had been used to attack supply lines from America to Britain during the Battle of the Atlantic) were assembled in Lough Foyle and scuttled, as part of Operation Deadlight.

A survey of Lough Foyle was made between March 1937 and June 1939 by H. Blackler. [1] In this a map shows the distribution of certain species of algae in the lough and a full annotated list of the algae recorded along with photographs of the different sites. The list included: ‘’Cyanophyceae’’, ‘’Chlorophyceae’’, ‘’Phaeophyceae’’, ‘’Rhodophyceae’’, lichens and two species of ‘’Zostera’’. The marine algae of Lough Foyle are also included in Morton (2003).[2]

The Royal Society for the Protection of Birds has a reserve at the lough.[3]

The Lough Foyle Ramsar site (wetlands of international importance designated under the Ramsar Convention), is 5,447 acres in area. It was designated a Ramsar site on 2 February 1999. The site consists of the large shallow sea lough which includes the estuaries of the rivers Foyle, Faughan and Roe. It contains extensive intertidal areas of mudflats and sandflats, salt marsh and associated brackish ditches. The site qualified under Criterion 1 of the Ramsar Convention because it is a particularly good representative example of a wetland complex which plays a substantial hydrological, biological and ecological system role in the natural functioning of a major river basin located in a trans-border position. It also qualified under Ramsar criterion 2 as it supports an appreciable number of rare, vulnerable or endangered species of plant and animal.

A range of noteworthy fish species have been recorded for the Lough Foyle estuary and the lower reaches of some of its tributary rivers. These include Allis shad, Twait shad, smelt and sea lamprey, all of which are Irish Red Data Book species. Important populations of Atlantic salmon migrate through the system to and from their spawning grounds.[4]