From Wikishire
(Redirected from Dumbartonshire)
Jump to: navigation, search

The County of Dumbarton or Dunbarton is a shire on the north bank of the River Clyde and stretching into the hills beside Loch Lomond.

The county consists of two parts. The main body lies between the north bank of the River Clyde and Loch Lomond and is bounded to the north by Perthshire, to the east by Stirlingshire and to the south-east by Lanarkshire, from which Glasgow spills. The southern bounds of Dunbartonshire are marked by the River Clyde and its estuary and the west by Loch Long and Argyllshire. The detached portion lies to the east and comprises the parishes of Kirkintilloch and Cumbernauld, all enclosed between Stirlingshire and Lanarkshire. This detached part was annexed to Dumbartonshire in the 14th century when the earl of Wigtown, to whom it belonged, became heritable sheriff of Dumbartonshire.

The county is in two parts, but its geography is separable into three parts. Of the main body of the shire, the east and south are the low-lying dale of the Clyde and its estuary. Here are the industrialised towns, grown contiguous with Glasgow, and the well-to-do towns, as Dumbarton and Helensburgh. The north-west and west are mountainous, and in this district the shire is suddenly sundered from Stirlingshire by the great geological fault which is filled with the beauties of Loch Lomond. The Cumbernauld area is more moderate in its hill, the Campsie Fells rising above Cumbernauld. 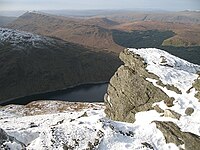 The greatest mountains of Dunbartonshire are all in the north, and of these there are two Munros; mountains above 3,000 feet. The main heights here are:

In the south are the Kilpatrick Hills, their highest points being Duncomb and Fynloch, each reaching 1,313 feet.

Though Dumbartonshire is more usually accounted a Lowland shire, its northern parts are truly of the Highlands. By the Clyde the placenames are overwhelmingly form Lowland Scots and English, but here in the hills are Gaelic names. Here are fair glens, such as Glen Sloy, Glen Douglas, Glen Luss and Glen Fruin. 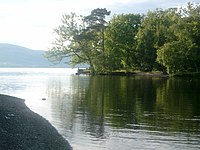 Mouth of the Leven

The only rivers of any size are the River Clyde, the Kelvin and the Leven, though the size of the Clyde alone forgives any deficiency felt in the others. The Leven flows out of Loch Lomond at Balloch and joins the Clyde at Dumbarton after a serpentine course of about seven miles. Most of the other streams are among the mountains, whence they find their way to Loch Lomond, the principal being the Inveruglas, Douglas, Luss, Finlas and Fruin. Nearly all afford good sport to the angler.

By far the largest and most magnificent inland water of the county is Loch Lomond, a border loch parting the shires of Dumbarton and Stirling.

Loch Sloy on the side of Ben Vorlich is a long, narrow lake, 812 feet above the sea amid wild scenery. From its name the Macfarlanes took their slogan or war-cry.

Gareloch is a sea-loch 6½ m. long and a mile wide, whose shores became popular in Glasgow's heyday for the summer retreats of the wealthy Glasgow businessmen. Garelochhead is the village for the loch-shore dwellers.

Loch Long, 17 miles long in fact has a shoreline of great beauty.

Like the other counties along the eastern border of the Highlands, Dumbartonshire is divided geologically into two areas, the boundary between the two being defined by a line extending from Rossdhu on Loch Lomond south-west by Row and Roseneath to Kilcreggan. The mountains to the north are of the metamorphic rocks of the Eastern Highlands as met with in adjoining Perthshire and Argyll. North of the Highland border the Aberfoyle slates and grits appear, repeated by isoclinal folds trending north-east and south-west and dipping towards the north-west.

Along the line of section between Luss and Ardlui is important evidence of the gradual increase of metamorphism northwards from the Highland border. In the extreme north between Ardlui and the head of Glen Fyne in Argyllshire there is a large development of plutonic rocks piercing the Highland schists and producing marked contact metamorphism.

On the hill-slopes to the west of Ardlui and Inverarnan diorite appears, while farther west, between the watershed and Glen Fyne, there is a large mass of granite. Boulders of plutonic rocks have been widely distributed by the ice during the glacial period.

Immediately to the south of the Highland border line is a belt of Upper Old Red Sandstone strata which stretches from Loch Lomond westwards to Kilcreggan. These sandstones and conglomerates are succeeded by the sandstones, shales, clays and cementstones at the base of the Carboniferous formation which occupy a narrow strip between Loch Lomond and Gareloch and are cut off by a fault along their south-east margin.

Eastward is a belt of Lower Old Red Sandstone extending from the mouth of the Endrick Water south-westwards by Balloch to the shore of the Clyde west of Cardross. Still farther east beyond Dumbarton the Upper Old Red Sandstone is again surmounted by cementstones, followed by the lavas, tuffs and agglomerates of the Kirkpatrick Hills, intercalated in calciferous sandstones. Here the terraced features of the volcanic plateau, produced by the denudation of the successive flows is well displayed.

Eastwards by Kilpatrick and Bearsden to the margin of the county near Maryhill the rocks of Calciferous Sandstone age are followed in normal order by the Carboniferous Limestone series; the Hurlet Limestone and Hurlet Coal of the lower limestone group being prominently developed.

In the detached portion of the county between Kirkintilloch and Cumbernauld there is an important coalfield embracing the seams in the middle or coal-bearing group of the Carboniferous Limestone series.

Along the shores of the Clyde the broad terraced features indicate the limits of successive raised beaches. 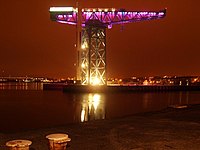 Historically, turkey-red dyeing was the distinctive industry of Dumbartonshire. The water of the Leven, being not only constant but also singularly soft and pure, dyers and bleachers built works at many places in the Vale of Leven. Bleaching has been carried on since the early part of the 18th century, and cotton-printing at Levenfield dates from 1768, which industry thus became more industrialised, in establishments at Alexandria, Bonhill, Jamestown, Renton and elsewhere for all the processes connected with the bleaching, dyeing and printing of cottons, calicoes and other cloths, besides yarns, are conducted on the largest scale.

By the Clyde though the heaviest of heavy industry took hold. Clydebank, a new-created town of the industrial revolution grew with engineering works and shipyards, and at Dumbarton too. Less impressive but as important were the extensive Singer sewing-machine works of Clydebank. Distilleries, breweries and the like thrived into the mid-twentieth century. In the detached portion, Kirkintilloch and Cumbernauld were mining towns for coal and ironstone and all the industry that went with them.

Heavy industry has much declined and post-industrial malaise has struck at towns such as Clydebank, but the Clyde is today still an industrial river and the rebirth of Glasgow since the 1980s has had a lightening effect on Dunbartonshire too. 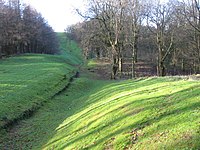 Part of the Antonine Wall 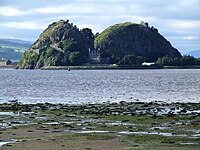 The Rock of Dumbarton

The earliest traces are of the hill forts and tumuli thrown up by the Caledonians and Picts, of whom no history remains.

The Romans came here. Though Agricola advanced to the Moray Firth, the legions did not stay in the Highlands. However under Antoninus the northern frontier of the empire was set here, and many traces of the Antonine Wall, built from the Forth to the Clyde, and running along the north of the detached portion of the shire and through the south-eastern corner of the county to Old Kilpatrick. Other Roman relics have been found at Duntocher, Cumbernauld and elsewhere.

Dumbarton, in ancient times was known as Alcluith, fort of the Clyde, which was the capital of the Kingdom of Strathclyde, the Welsh kingdom of the Lowlands. From the Rock of Dumbarton, Strathclyde held out for centuries against the Scots of Argyll, until the two united in the creation of the new power in the north.

The shire forms part of the old territory of Lennox (Levenachs; "fields of the Leven"), which embraced the Vale of the Leven and the basin of Loch Lomond, or all modern Dumbartonshire, most of Stirlingshire and parts of the shires of Renfrew and Perth. It gave the title of the earldom created in 1174 by William the Lion and of the dukedom conferred by Charles II on his bastard son, Charles, Duke of Richmond and Lennox.

William Wallace was brought in chains to Dumbarton Castle, whence he was taken to his death in London. Robert Bruce is said to have mustered his forces at Dullatur before the battle of Bannockburn, and died at Cardross Castle in 1329.

In the Highland country the clans of Macgregor and Macfarlane made their home in the fastnesses, whence they descended in raids upon the cattle, the goods and sometimes the persons of their Lowland neighbours. In Glen Fruin in 1603 took place the bloody conflict between the Macgregors and the Colquhouns, in which the latter were almost exterminated. It was this savage encounter that led to the proscription of the Macgregors, including the famous Rob Roy.

The Covenanters in their flight from the bloody field of Kilsyth, where in 1645 Montrose had defeated them with great slaughter, made their way through the southern districts. When the Forth and Clyde Canal was being excavated swords, pistols, and other weapons dropped by the fugitives were found at Dullatur, together with skeletons of men and horses.

In 1702 the Lennox estates were sold to the Marquis of Montrose.

The Industrial Revolution saw the greatest changes in Dumbartonshire. The Clyde burst with activity, the shipyards of Glasgow spread downstream into Dumbartonshire and the new industrial town of Clydebank was established. Soon, many miles of the Clyde were working hard, building, loading and sailing the cargo ships that brought British goods to the Empire and the world.

At the same time, the railways came and brought a new breed; the visitors who climbed from the new stations to visit the beauties of the county's glens and lochs.

The decline of industry in the later twentieth century, in the face of international competition, turned the wealth that grew of the Victorian age into the post-industrial decline in many parts, though Dunbartonshire remains the wealthy county, where commuter towns serve Glasgow, and the mountains remain, timeless.

†: Parishes forming a detached part of the county.
‡: Extends into Stirlingshire.

Things to see in Dumbartonshire 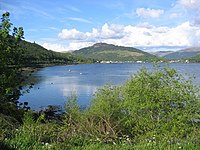