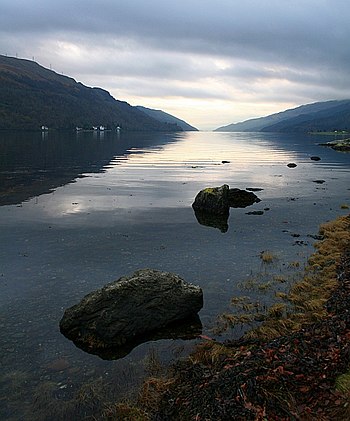 Looking down Loch Long from the torpedo testing facility to Ardmay

Loch Long is a sea-loch which marks the boundary between Argyllshire on its western shore and Dunbartonshire on the eastern shore. Its name is from the Gaelic for 'ship loch'.

The loch extends from the Firth of Clyde at its southwestern end. It measures approximately 20 miles in length, with a width of between one and two miles. The loch also has an arm, Loch Goil, on its western side.

The loch was used as a testing ground for torpedoes during Second World War and contains numerous wrecks. It is now a popular area for sport diving.The Ardentinny Outdoor Education Centre (on the other bank) also uses the loch for watersports.

Several sea fishing records are attributed to the loch:

About the loch shore

Across Loch Long to Ardentinny

The Finnart Oil Terminal stands on the eastern shore of the loch, linked to the Grangemouth Refinery by way of a 58-mile pipeline.[1] The eastern shore is also the location of the Royal Navy's Coulport Armament depot, part of HMNB Clyde, and the Glen Mallan jetty, linked to Glen Douglas defence munitions depot.

Important villages on the loch include Arrochar at its head and Cove on the east shore near its foot.

The loch forms the entire western coastline of the Rosneath Peninsula.