The original extent of the parish spanned a large area from Strathblane in the north to Baldernock and Summerston (on the River Kelvin) in the east, down to Anniesland in the south and Yoker and Duntocher in the west, a quarter which is in Stirlingshire. The geography of the area has supported mining, iron-working and quarrying in the past, but these are no longer economically viable, and much of the area functions as suburbs of Glasgow.

As the population of the area grew, the ecclesiastical parish reduced in area as smaller parishes were separated off and the parish now covers only a fraction of the town of Bearsden. The parish church was built in 1649 from local stone, and was replaced in 1807 with a larger building.

In about 1227, the church and lands of Kilpatrick were given to Paisley Abbey by Maldowen, Earl of Lennox. The name 'Kilpatrick' is an Anglicised form of the Gaelic Cille Phàdraig, meaning "Patrick's Church". The alternative anglicised form "Kirkpatrick" is occasionally used in old texts. It is therefore reasonable to assume that a church dedicated to St Patrick gave the area its name before the transfer to Paisley Abbey. The parish remained under the supervision of the Abbey until the Reformation in 1560.[1]

At the Dissolution, the Church property fell into the possession of Lord Sempill. Eventually the lands were conferred on Lord Claud Hamilton (a boy of ten), ancestor of the Dukes of Abercorn.[2] His son James Hamilton was created Lord Abercorn on 5 April 1603, then on 10 July 1606 he was made Earl of Abercorn and Lord of Paisley, Hamilton, Mountcastell and Kilpatrick.[3]

Kilpatrick was split into Wester Kilpatrick and Easter Kilpatrick by an Act of Parliament on 16 February 1649.[4] This division is of note because this was a split of both the ecclesiastical and civil parishes and the wealth and stipend of the original parish was shared between the two new parishes. It was more common for new parishes to have "daughter" status, with wealth retained by the central, or cathedral church.[5]

Since 1649 a succession of new ecclesiastical parishes have been separated from the original, of which are Drumchapel, Knightswood and Temple, Milngavie, Baldernock and Drumry, and in Stirlingshire is Strathblane.[6]

In 1672, Parliament heard a petition from John Douglas of Mains to hold markets in the parish on 1 May and 21 October each year. The purpose of this was to encourage the local economy, and the bill was passed.[7] John Douglas was a heritor of the parish and was the 11th Laird of Mains, registering his coat of arms in 1672.[8]

The geology of the area runs east-west through the parish from Dunbarton to Maryhill and has supported various industries. Devonian Old Red Sandstone (415-360 million years old) is overlaid by the Carboniferous Limestone series (360-300 million years old); in particular, the Hurlet Limestone and Hurlet Coal of the lower limestone group are prominently developed.[9] A yellow sandstone of quite different character from the Old Red Sandstone extends from the Clyde at intervals to Netherton and Garscube. This stone easily chiselled, but hardens on exposure, making it a useful building material.[10] Local industry has historically included some coal-mining and lime manufacture, and an iron works at Garscube.[11] Coal was mined at Baljaffray until 1910 and used for burning limestone (also found there) to make lime. However, the presence of significant pyrite deposits in the coal made it poor quality and unsuitable for further exploitation.[12]

By 1911, the Encyclopædia Britannica described New Kilpatrick as a town in Dumbartonshire, 5.2 miles NW of Glasgow, with a railway station on the Milngavie branch line. Key public buildings are listed as the Schaw Convalescent Home, Buchanan Retreat (now Boclair House), house of refuge for girls, a library, and St Peter's College.[11] 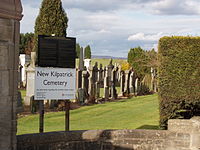 The original parish church was built in 1649 from local stone. This can be confirmed by the passing of an Act of Parliament (in July 1649) in favour of the parishioners of New Kilpatrick and against one of the parish heritors, Sir Umphra Colquhoun of Balvie (now Mains). It seems that Colquhoun had agreed to the quarrying of stone from his land to build the church, but at some point during the building process (at least halfway), he had confiscated the workmen's tools and prevented the work from continuing by charging the workers with lawburrows. For this to be the case, Colquhoun must have argued that the work in some way caused him to fear for his safety, and the workers would have had to place a deposit with the court, which would be forfeit if they continued. Colquhoun lost the petition, and the church was completed.[13]

The current New Kilpatrick Church was built in 1807, and subsequently enlarged in 1873-85 and in 1908. Electric lights were installed in 1923.[14] The church for many years placed assistant ministers within the parish at Netherton and Temple, Blairdardie, Drumchapel and Westerton.[15] The church is also one of the principal performing venues of the Bearsden Choir.

In 1929, further housing developments and the union of churches in Scotland brought together the growing congregations of Beardsen North (Free Church) and South (United Presbyterian) churches into the Church of Scotland in Bearsden. It was therefore deemed appropriate to divide the remaining parish area, leaving the original New Kilpatrick church with oversight of an area with boundaries at Canniesburn, Burnbrae and the Baljaffray-Stockiemuir crossroads.[6]