Rosneath is a village in Dunbartonshire, sitting on the western shore of the Gare Loch near to the tip of the Rosneath peninsula which projects south to the Firth of Clyde between the Gare Loch and Loch Long to the west, It is to be found about two miles from the village of Kilcreggan which stands on the southern end of the peninsula, on the shores of the Firth of Clyde. Greenock in Renfrewshire is directly opposite on the southern shore of the Firth. The Gare Loch narrows at Rosneath to under half a mile at a place known as the Rhu Narrows after the village of Rhu on the eastern shore of the loch.

Rosneath lies approximately 44 miles from Glasgow by road. It is on the B833, a shoreside minor thoroughfare that serves the peninsula.

The Rosneath area has been settled from at least 600 onwards, when St Modan, a travelling missionary, founded a church there. The name Rosneath may have its roots in this era; it is derived from the Gaelic Rossnachoich, meaning "Virgin's Headland."[1] Another account indicates that it may come from Ross-neoth, or unwooded headland. [2]

The name has historically been spelled as Roseneath, which is reflected in the name of Roseneath Street in Greenock, which overlooks the village.

Later, the area was heavily fortified, with Rosneath's own castling joining those of nearby Faslane and Shandon (located at Faslane and Shandon), all of which are long since gone. Rosneath village did not yet fully exist by this time; instead, Rosneath parish was home to many free-standing dwellings, the occupants of which were for the vast bulk of the area's history employed in agriculture and fishing. Frequent shipping services to Glasgow, Greenock and beyond were vital for the local economy until recently. 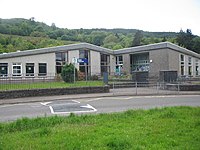 Rosneath Castle was ruined and rebuilt many times; the final rebuilding came in 1803, three years after the previous building burnt down. Located further uphill from previous versions, it belonged to the Duke of Argyll whose family retained it until Princess Louise died in 1939. In stark contrast to the earlier castles, it was in the Romanesque style.

From 1941 to 1945, Rosneath was home to an important naval base, thanks to its location in the well-sheltered natural harbour of the Gare Loch. The Americans used Rosneath Castle as a base of operations. The castle was later demolished in 1963.