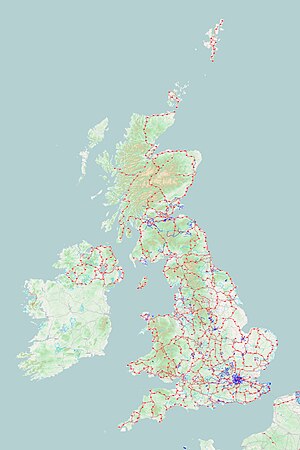 Map of the National Cycle Network 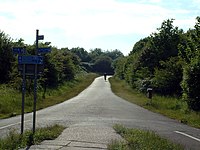 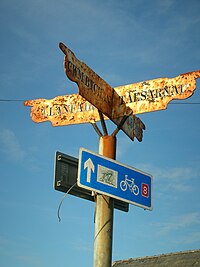 The National Cycle Network (NCN) is the national cycling route network of the United Kingdom, which was established by the charity Sustrans to encourage cycling throughout Britain, as well as for the purposes of bicycle touring. In this effort, Sustrans were aided by a £42.5 million National Lottery grant. In 2005 it was used for over 230 million trips.

Little of the NCN is on dedicated bike paths. Though many routes try to minimise contact with motor traffic, 70% of them are on roads.[1] The NCN uses pedestrian routes, disused railways, minor roads, canal towpaths and traffic-calmed routes in towns and cities.

The opening of the Bristol and Bath Railway Path (now part of National Route 4) in 1984, a 15-mile cycleway following a railway no longer in use, was the first part of the NCN.[2]

There are currently some 13,000 miles of signed cycle route to NCN standards.[3]

The main routes have one digit (1 to 6 radiate clockwise from the south of England, 7 in the north, 8 in Wales, 9 in Ulster). Other routes have two digits, starting with the number of the relevant main route.

Of the many regional routes, each 'region' is divided into a maximum of nine 'areas', which created duplication, but as from 2009, regional routes have been renumbered with unique 3-digit national numbers.[4]

Routes are occasionally numbered to match the motorways and major roads that connect the same destinations; examples include NCN Route 62, which by connecting the two sides of the Pennines mirrors the M62 motorway. 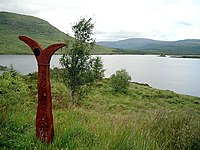 One thousand "Millennium Mileposts" made from cast iron were funded by the Royal Bank of Scotland to mark the creation of the National Cycle Network, and these are found along the NCN routes throughout the UK.

There are four different types: "Fossil Tree" (designed by John Mills), "The Cockerel" (designed by Iain McColl), "Rowe Type" (designed by Andrew Rowe), and "Tracks" (designed by David Dudgeon). The four artists are from each part of the UK, though all posts can be found nationwide.[5][6]