Havant (ˈhævənt) is a town in south-eastern Hampshire, a coastal town on the English Channel between Portsmouth and Chichester. Like many a town on that coast, Havant has rapidly grown since the end of the Second World War.

The old centre of the town is on a classic crossroad configuration, with the four streets being named North Street, East Street, South Street and West Street, and St Faith's Church at the crossing. At least one axis (and evidence suggests both) is a known Roman road.

The Old House at Home

There are several natural springs in the area, including one a short distance south-west of the church on West Street at the end of Homewell. This used to be the home of the premier parchment making facility in the southern counties (until it closed in 1936) which later became a glove making factory and leather processing plant. The Treaty of Versailles was written on Havant parchment.[1]

The main shopping centre is called Meridian Shopping (formerly known as the Meridian Centre), as well as a pedestrianised section of West Street. The old town hall now houses the Spring Arts and Heritage Centre (formerly known as Havant Arts Centre). Havant is home to the local community radio station, Angel Radio which specialises in music and memories of the pre-'60s era.

The town has good railway connections to London, Portsmouth and Brighton, being served by Havant railway station. The A27 road runs past its southern side, beyond which lies Langstone, and then Hayling Island.

To the north is Leigh Park, a large council estate suburb which lies within Havant's boundaries, and beyond that Staunton Country Park. To the east is Emsworth, another small town, whilst to the west lies Bedhampton and Portsdown Hill. The A3(M) motorway section passes to the west.

Archeological digs in the 19th and 20th centuries uncovered evidence of Roman buildings – near St Faith's Church and in Langstone Avenue, along with neolithic, mesolithic remains.[1]

Havant was known around 935AD as Hamafunta ("Hama's spring"), referring to the spring to the southwest of St Faith's Churchyard, and a settlement was made at the crossing point of tracks from the South Downs to the coast and another east – west along the coast.[1]

In 1086 (at the time of Domesday Book), Havant was a village with a population of around 100. In 1200, the monks of Winchester Cathedral were granted the right to hold a market at Haveunte.[1] Around 1450 an annual fair was held.[2]

For much of its history water played a vital part in local commerce, with many water mills, parchment manufacture and brewing.[1]

Much of Havant was destroyed by fire in 1760, leaving only the church and the adjacent late 16th or early 17th century cottages. The cottages are now known collectively as "The Old House at Home", and are now used as a pub. It is claimed that the two main beams in the lounge bar were recovered from the Spanish Armada, and that the "Bear Post" within once had the last dancing bear in England tethered to it. The fire did allow widening of roads and the easier passage of stagecoaches through the town: the Bear Hotel and Dolphin Hotel were notable coaching inns. In the early hours of 25 October 1784 Havant suffered a minor earthquake, and a similar event occurred on 30 November 1811.[1]

One of Havant's architectural gems is Hall Place, a large Georgian house on South Street. It was rebuilt in 1796 by John Butler on the site of an older house reputedly built with stone from Warblington Castle. The present house, of buff bricks from Dorset, passed in the early part of the 19th century into the ownership of the Longcrofts, a well-known local family of solicitors, who retained the house until the middle of the 20th century. The history of Hall Place and its owners is recorded in The Longcrofts: 500 Years of a British Family by James Phillips-Evans (2012).

Early English in style, the oldest undisturbed parts of the Church of St Faith, such as the chancel, date from the early 13th century. Some of the foundations however are believed to date from Roman times. The vestry is 14th century and there is a brass to William Aylward, 1413.[3]

By 1768 Havant had its first postmaster and the town's post office operated from several locations from different central addresses until premises opened in East Street in 1936 (being one of only two post offices in the United Kingdom with the cipher of Edward VIII above the entrance).

In 1847 Havant became connected by railway to Portsmouth and Chichester, and this was followed by a connection to London in 1859 and a branch line to Hayling Island in 1867 (closed in the 1960s). Since then it has been an important junction.

The first hospital in the town opened in 1894 in Potash Terrace as a fever hospital, closing in 1939. A war memorial hospital opened in 1929 in Crossway; in 1935 a fine frieze of Wedgwood tiles depicting nursery rhymes was added to the children's ward.[1] 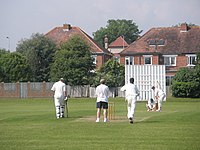 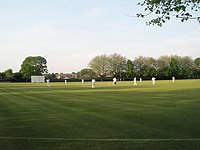