Glasbury also known as Glasbury-on-Wye, is a village spanning the border of Radnorshire and Brecknockshire. The village lies at an important crossing point on the River Wye, connecting Radnorshire and Brecknockshire, and is located just outside the Brecon Beacons National Park, north of the Black Mountains. The village is split between the parishes of Glasbury (Radnorshire) and Gwernyfed (Brecknockshire). The nearest town is Hay-on-Wye, some four miles to the north east. The nearest city is Hereford, some 25 miles to the east. Glasbury is a popular location for river fishing, canoeing and kayaking. The population of Glasbury is 286 (census 2011) but in 1841 when a single parish it was 838. 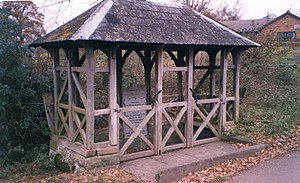 The early village grew north of the river crossing, where a church was built dedicated to St Cynidr, a 6th-century bishop said to be buried in Glasbury.[1] The name 'Glasbury' derives from the Welsh 'clas', which signifies a glebe or church land. St Cynidr's name is retained in the small settlement of Ffynnon Gynydd to the north of the village, where Cynidr's well is still visible. From the 6th century to the 11th century, Glasbury formed part of the Kingdom of Brycheiniog, ruled from nearby Talgarth.

The importance of this early church was such that Glasbury was made a diocese. A list of the bishops of Glasbury still exists and gives the last bishop as Tryferyn, who died in 1055.[2] The diocese was subsumed by the bishopric of Glamorgan, later Llandaff.[3]

In the mid 11th century, the Welsh kingdoms (including Brycheiniog) were temporarily united under Gruffydd ap Llywelyn. On 16 June 1056, a battle was fought at Glasbury between an English force, led by Bishop Leofgar of Hereford, and a Welsh force led by Gruffydd ap Llywelyn, at which the warrior bishop was killed.[4]

After the Norman invasion, the kingdom of Brycheiniog (including Glasbury) was conquered or otherwise acquired by Bernard de Neufmarché, one of the Marcher Lords.[5] In 1088, he presented the Manor and church of Glasbury to the Abbey of St Peter's at Gloucester and the parish church of St. Cynidr was rededicated to St Peter. The patronage of the church was later transferred to the Bishop of Gloucester and subsequently to the Bishop of St David's, with whom it remains today.[6]

In 1144, as part of an exchange, the lordship of the Manor of Glasbury passed from Gloucester Abbey to Walter de Clifford,[7] after which time it was frequently contested by the marcher families. Following a dispute with John Giffard, the lordship passed to John de Braose of Glasbury (son of John de Braose) in 1275.[8] In 1299, it passed to Margaret Longespee and her husband Henry de Lacy, 3rd Earl of Lincoln and in 1330 to Roger Mortimer, 1st Earl of March. The lordship was seized by the crown in 1331, but returned to Mortimer's grandson Roger Mortimer, 2nd Earl of March in 1354 and in 1360 to his son Edmund Mortimer, 3rd Earl of March.[9] In 1404, King Henry IV granted the lordship to Sir Robert Whitney "in consequence of his father...having been killed in the royal service and his property burnt by the Welsh rebels".[10]

Glasbury Castle, north of the river, was first mentioned in 1144 when it was granted (with the manor) to Walter de Clifford. In August 1233, the castle was attacked and captured by King Henry III following a baronial rebellion by the Cliffords, but little more is recorded after that, though it was still in existence in a survey of Glasbury Manor dated 1561[6] Remains of its earthworks were visible near the centre of the village[11] until housing development in the 1970s.[12]

Split between Radnorshire and Breconshire 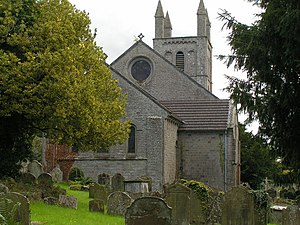 Following floods in the mid seventeenth century, the River Wye changed course and the old parish church of St Peter's found itself south (rather than north) of the river and subsequently fell into disrepair. A new one was built still further south in 1661, though the current building dates from 1837. It is now a Grade II listed building.[14] In 1883, a second church was built north of the river and the Radnorshire side of the village transferred to the new parish of Glasbury, All Saints.[6] 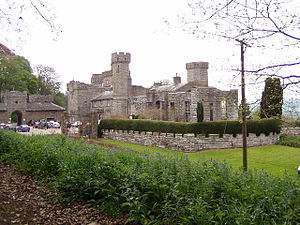 Maesllwch Castle, overlooking Glasbury to the north, was built close to an original hall house of the Vaughan family which was later owned by Charles Lloyd. The house was rebuilt by the Howarths in 1715, when the surrounding park was also established. The current building was grandly conceived in castellated style by the architect William Lugar for the de Winton family in the mid-nineteenth century. In the Second World War it was requisitioned and used as a Canadian hospital and subsequently by the Land Army. Part of the castle was later demolished to reduce the costs of upkeep, but it remains an imposing private residence and a Grade II listed building.[15][16]

Maesyronnen Chapel and the non-conformists 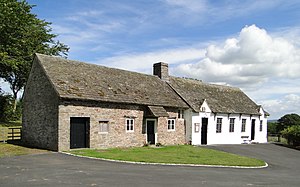 The early puritan non-conformist Vavasor Powell is believed to have first started his preaching career to the north of the village in the 1640s. The 1654 pamphlet 'Hue and cry after Mr Vavasor Powell' was written by Alexander Griffith, vicar of Glasbury, who had been expelled from the living by Vavasor and others for "drunkenness and lasciviousness".[17][18]

Maesyronnen chapel was founded around 1691 on land donated by Charles Lloyd, squire of Maesllwch.[19] It is considered the most important surviving building associated with the non-conformist movement in Wales and lays claim to being the first and oldest chapel in Wales.[20] It is now a Grade I listed building, still used and maintained by the United Reformed Church.[21] A much later United Reformed chapel was built on the village green in "Gothic style" in 1866,[22] but is now a private residence. It remains a Grade II listed building.[16]

The Methodist chapel at Cwmbach in the north of the village dates from 1818, when local farmer Richard Hergest received a revelation that it should be built in his meadow.[22] It is also a Grade II listed building[16] and remains in use.

The Baptist chapel at Treble Hill, just south of and conveniently close to the River Wye, was built in "temple style" in 1866 and closed in 2010.[22] It remains a Grade II listed building.[14] 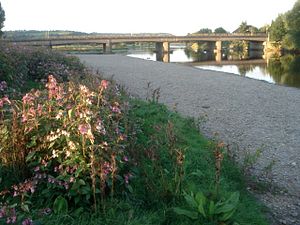 Glasbury Bridge has repeatedly been destroyed by floods. A wooden bridge was washed away in 1738, a replacement in 1777, and a stone bridge in 1795.[23] In 1850, a dispute between Brecknockshire and Radnorshire over costs for a new bridge led to the construction of a compromise half-wooden (Radnorshire), half-stone (Brecknockshire) bridge. The current six-span masonry bridge was built in 1923.[24]

Glasbury was and still is on the main road between Brecon and Hereford and Brecon and Hay-on-Wye. These roads were formerly turnpikes and a turnpike toll house (now a private residence) still remains on the northern edge of the village. In 1843 a Royal Commission of inquiry took evidence that "The Glasbury gates are a great inconvenience" since "persons travelling from one part of the village to the other pay two tolls", one to the Radnorshire and one to the Brecknockshire trust.[25] This provoked an incident during the Rebecca Riots of 1843-44 when one of the Glasbury turnpike gates was destroyed.[26]

A tramway connecting Hay-on-Wye with the Brecknock and Abergavenny Canal ran through Glasbury, on the southern side of the river. Called the Hay Railway, it was horse-drawn, carried coal, limestone, and agricultural produce, and opened on 7 May 1816. The stations were known as 'wharves' and Glasbury Wharf was at Llwynau-bach, to the south-east of the village, where traces of stabling for the draught horses remain.[26]

The tramway was replaced by the Hereford, Hay and Brecon Railway which opened for traffic in 1864 and closed in 1962. The route mostly followed the old tramway. Glasbury Station was in the Treble Hill area in the south of the village, where three railway bridges are still standing.

The Maesllwch Arms in the northern half of the village is an old coaching inn with stables and is a Grade II listed building. Though no longer on the main road, the inn still offers accommodation as well as food and drink, as does the Harp Inn on the southern side.[27] Glasbury still retains a post office and village stores, as well as a riverside restaurant,[28] an antique shop, a garage, and filling station.

Glasbury is a centre for canoeing and kayaking on the River Wye[29] and for walking and other activities in the Black Mountains. Two outdoor education centres are based in the village: Woodlands Outdoor Education Centre, owned by Oxfordshire County Council,[30] and Glasbury House Outdoor Education Centre, owned by the London Borough of Redbridge.[31] Both offer accommodation and a range of activities for young people.

Orchards and the 'Glasbury' apple

In 1815, the late Rev. John Hughes, curate of Glasbury, was described as "an active and zealous orchard-planter" who "introduced grafts from vigorous-bearing trees of the choicest cyder sorts".[34] Perhaps as a result of his endeavours, a 1912 guide book referred to Glasbury "nestling in a circle of orchards",[35] some few of which survive to this day.

Francis Kilvert was curate of the nearby village of Clyro from 1865 to 1872. Glasbury is mentioned several times - often as "sweet Glasbury" - in his published diaries.[38]

Glasbury lies entirely within the vice-county of Radnorshire for the purposes of biological recording. Plant and lichen records are thus included in the Flora of Radnorshire.[39]

The Brecknock Wildlife Trust nature reserve known as ‘Glasbury Cutting’ has been created from part of the disused Hereford, Hay and Brecon Railway line and is to the east of Glasbury, on the B4350 towards Hay-on-Wye. The reserve is home to rare dormice which were discovered there in 2000.[40]