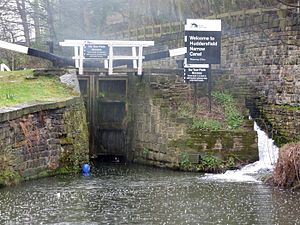 The Huddersfield Narrow Canal is an inland waterway in the West Riding of Yorkshire and southern Lancashire. It runs just under 20 miles from Lock 1E at the rear of the University of Huddersfield campus, near Aspley Basin at Huddersfield in Yorkshire, to the junction with the Ashton Canal at Whitelands Basin in Ashton-under-Lyne, Lancashire. It crosses the Pennines by means of 74 locks and the Standedge Tunnel.

Operation ceased on most of the canal in 1944, and the remaining miles in Huddersfield in the 1960s, but after restoration work the canal was fully re-opened to navigation in 2001. It is now exclusively used by leisure craft not industrial transport as was its original purpose. It is one of three canals crossing the Pennines, the others being the Rochdale Canal and the Leeds and Liverpool Canal, both broad canals.

The canal was first proposed in 1793 at a meeting in the George Hotel in Huddersfield. Its engineer was Benjamin Outram on the recommendation of William Jessop. His plan was to start from the Huddersfield Broad Canal and follow the River Colne with a climb of 438 feet to its summit, where it would pass through a tunnel at Standedge before descending through Saddleworth and thence across into Lancashire to the Tame valley to the Ashton Canal near Ashton-under-Lyne. There were many woollen, worsted and cotton mills along its route which promised ample trade. However, there was the possible problem of the loss of their water supplies, so Outram proposed to build a number of reservoirs. 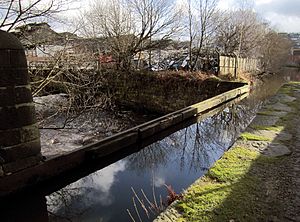 Construction began in 1794 with the marking out of the route. The practice was to set up a line of pegs or stakes about 50 yards apart so that their tops would indicate the intended water level. It would then be possible to construct the appropriate embankments and cuttings.

As engineer, Outram provided an oversight of the work, whilst also occupied by other projects. The day-to-day management was carried out by contractors employed and organised by the canal company committee. Progress was slow and erratic. It was also unfortunate that Outram was seriously ill for long periods between 1795 to 1797. The company was also short of money, partly because the costs had been seriously underestimated, but also because shareholders were not honouring their pledges.

In 1799, severe floods damaged earthworks along the canal and of the various reservoirs. In particular, overflow of the Tunnelend Reservoir devastated the village of Marsden. Two aqueducts were also destroyed, diverting the company's already-stretched funds. The Stakes Aqueduct was already in use and had to be replaced immediately. Outram had built it of stone and, due to its low height, it had needed to be constructed in four short spans. The narrow openings had impeded the unprecedented overflow and Outram replaced it with a single span cast iron structure, similar to the Holmes Aqueduct on the Derby Canal.

Outram set out to overcome the problems with the Holmes Aqueduct by making the walls thicker where they joined the baseplates, which also were thicker. However a major stress was the compressive force along the top of the wall plates where they bow outwards or inwards. In 1875 cross bracings were added to reinforce it. The Stakes Aqueduct is the oldest surviving aqueduct of its type that is still in use for its original purpose. 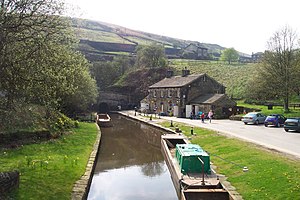 Although the canal uses 74 locks to climb and descend the Pennines, there would have had to be many more without the digging of a very long tunnel through the Tame/Colne watershed (the River Colne flowing down to Huddersfield and the River Calder, and the Tame flowing down to Stockport and the River Mersey). The canal tunnel is 5,700 yards long, making it the longest canal tunnel in the United Kingdom. It is largely brick lined but in some places the tunnel has been left with a natural rock surface.

In 1810, the Diggle Moss Reservoir gave way and Marsden was again flooded, along with much of the Colne Valley. Houses and factories were wrecked and five people lost their lives. The force of the water was such that a fifteen-ton rock was carried 2 miles down the valley.

Despite multiple problems, the building of the Huddersfield Narrow Canal showed that the technique of quantity surveying had advanced greatly. Thomas Telford's report during the construction of the Standedge Tunnel covered every expenditure to the last bucket; it was followed to the letter and the canal finally opened in 1811.

The canal operated for approximately 140 years. Although it was moderately successful for a while, its width (limited to boats less than 7 feet wide), the large number of locks and the long Standedge Tunnel, made it much less profitable than its main rival the Rochdale Canal which had a similar number of locks but was twice as wide with no long tunnel.

Standedge Tunnel proved to be a bottleneck having been constructed without a towpath. Narrowboats had to be 'legged' through, eventually by professionally employed leggers. A company employee would chain the tunnel entrance behind a convoy of boats and walk over Boat Lane, accompanied by boat boys and girls leading the boat horses, to unchain the opposite end of the tunnel before the boat convoy arrived. This journey was made at least twice per day for over twenty years.

The construction of a double railway tunnel parallel to Standedge canal tunnel adversely affected canal revenues and the canal was mostly abandoned in 1944, though a short stretch in Huddersfield survived until the 1960s.

In the late 20th century, after 27 years of campaigning and restoration by the Huddersfield Canal Society the canal was fully re-opened to navigation in 2001, when it again became one of three Pennine crossings, the others being the Rochdale and the Leeds and Liverpool (both broad canals). The canal is now entirely used by leisure boaters.

During the period of time when the canal was closed, several lengths were culverted and infilled, and in some cases built over. Over the course of the restoration project, the vast majority of the obliterated line became available to be opened out again, and the canal remains on a substantially identical alignment with some minor alterations.

The Huddersfield Narrow Canal made its original connection with the Huddersfield Broad Canal at Lock 1E, to the west of the A629 Wakefield Road. Strengthening work on the Wakefield Road bridge, during the 1970s included the construction of a reinforced concrete tunnel and pedestrian walkway. The 300-yard section of broad canal from Aspley Basin to Lock 1E is no longer accessible to vessels wider than 7 feet. Although British Waterways has not officially redesignated it, its eastern end thus forms the effective commencement/terminus of the Huddersfield Narrow Canal.

Due to a legal quirk, the stretch of the canal from Lock 1E to Queen Street Bridge was not included in the original abandonment of the canal. Whilst locks on the remainder of the canal were capped, cascaded or demolished, locks 1E and 2E remained gated, but eventually fell into dereliction. The old gates were only removed when canal restoration work started.

Two factories (Bates and Sellers) had been built immediately upstream of locks 2E and 3E respectively on the line of the canal. In each case, the solution was the same: the lock was relocated upstream of the factory and a tunnel constructed below the factory. This avoided disruption to the firms now using the sites. The remodelling of the canal can be clearly seen between the former site of Lock 2E and Queen Street Bridge, where a framework of girders sits above the channel to ensure that the deep piling remains secure.

The section of canal through Slaithwaite town centre, between locks 21E and 23E had been culverted, and a car park covered part of the route.

Restoration caused some local controversy, as it involved the felling of a row of mature cherry trees which had been planted along the infilled line, although the local authority claimed that the trees were in poor condition, and unlikely to last for many more years in any case.

Lock 21E was relocated a short distance upstream, to the other side of Platt Lane, in order to ensure that the Platt Lane crossing could be achieved by a conventional bridge instead of the swing bridge that had existed prior to closure.

The stretch from 22E to 23E threads its way through an extremely tight space. Britannia Road Bridge was formerly hump backed, but changes in traffic levels since closure rendered such a bridge impractical, and instead the pound from 22E to 23E was lowered by 12 inches. 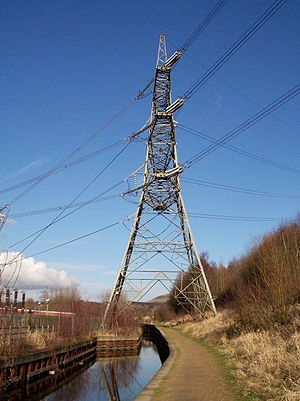