Forth and Clyde Canal

From Wikishire
(Redirected from Forth & Clyde Canal)
Jump to: navigation, search 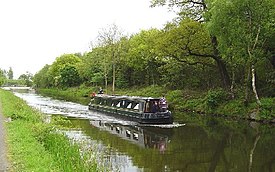 The Forth and Clyde Canal, near Bonnybridge and Larbert

The Forth and Clyde Canal opened in 1790 as a canal crossing the Central Lowlands in order to provide a route for the seagoing vessels of the day between the Firth of Forth and the Firth of Clyde, at the narrowest part of the Lowlands. The canal is 35 miles long and it runs from the River Forth near Grangemouth, Stirlingshire, to the River Clyde at Bowling, Dunbartonshire. It also has a spur through Glasgow and in its day it had an important basin here at Port Dundas.

Successful in its age, the canal suffered as the seagoing vessels were built larger and could no longer pass through. The railway age further impaired the success of the canal, and in the 1930s decline had ended in dormancy.

The M8 motorway in the eastern approaches to Glasgow took over some of the alignment of the canal, but more recent ideas have regenerated the utility of the canal for leisure use.

The eastern end of the canal is connected to the River Forth by a short stretch of the River Carron near Grangemouth. It climbs and leaves Stirlingshire near Banknook, and then runs for several miles parallel to the Stirlingshire-Dunbartonshire border, just inside the latter county.

The highest section of the canal passes to the south of to Kilsyth and it is fed there by an aqueduct which gathers water from the purpose built Birkenburn Reservoir in the Kilsyth Hills, stored in another purpose-built reservoir called Townhead near Banton, from where it feeds the canal by way of a feeder from the Shawend Burn near Craigmarloch.

The canal continues past Twechar, through Kirkintilloch and thereafter enters Lanarkshire. It passes to the north of Bishopbriggs an on to the Maryhill area north of Glasgow city centre.

A branch to Port Dundas was built to secure the agreement and financial support of Glasgow merchants who feared losing business if the canal bypassed them completely. The western end of the canal connects to the River Clyde at Bowling.

The Clyde and Forth Canal and the Union Canal are connected at Falkirk by the Falkirk Wheel, a remarkable boat lift unique in the world. It was built in 2000 was built as part of the millennium celebrations to regenerate both canals. It allows boats once more to travel between the Clyde or Glasgow and Edinburgh.

The Falkirk Wheel is the only rotary canal connector in the world. The two canals are separated vertically by 115 feet, far beyond the capability of a single lock, and though the two were once connected by a flight of 11 locks stretched over more than a mile of canal, this link was dismantled in 1933. The solution then was a unique rotary boat lift between a basin off the Forth and Clyde at the bottom and a spur of the Union on an aqueduct high above. Opposite each other on the vast steel wheel are two "gondolas", one on the level of each canal. A canal boat on one canal enters the gondola, which is then closed, and the great wheel turns, moving the gondolas up and down each to the other canal. Riding the wheel is a popular day out.

Each gondola is attached to a cog 26 feet in diameter, meshed to a central 26-foot cogwheel by smaller cogs. Notwithstanding the size of the structure, the precise balancing of the gondolas and cogs allows the Wheel to turn with ten hydraulic motors in the central spine running on just 1.5kW of electricity.[1]

The Wheel was built in Derbyshire and reassembled in Falkirk in 2002.

The first act of parliament relating to this canal, received the royal assent on the 8th of March, 1768, and it is entitled, 'An Act for making and maintaining a navigable Canal from the Firth or River of Forth, at or near the mouth of the River Carron, in the county of Stirling, to the Firth or River of Clyde, at or near a place called Dalmuir Burnfoot, in the county of Dumbarton; and also a collateral Cut from the same to the city of Glasgow; and for making a navigable Cut or Canal of Communication from the Port or Harbour of Borrowstounness, to join the said Canal at or near the place where it will fall into the Firth of Forth.'

The subscribers were incorporated by the name of "The Company of Proprietors of the Forth and Clyde Navigation," with power to raise among themselves the sum of £150,000, in fifteen hundred shares of £100 each, and an additional sum of £50,000, if necessary.[2]

At first there were difficulties with securing the capital for the work, but soon "the execution of this canal proceeded with such rapidity, under the direction of [the engineer] Mr. Smeaton, that in two years and three quarters from the date of the first act, one half of the work was finished; when, in consequence of some misunderstanding between him and the proprietors, he declined any further connection with the work, which was shortly afterwards let to contractors, who however failed, and the canal was again placed under the direction of its original projector, who brought it to within six miles of its proposed junction with the Clyde, when the work was stopped in 1775 for want of funds, and it continued at a stand for several years."[2]

Numerous supplementary Acts of Parliament preceded this period and more followed, but the key to unlocking the problem was some creativity, in which "the Barons of the Court of Exchequer in Scotland, are, out of the money arising from the sale of forfeited estates, directed to lend the Forth and Clyde Navigation Company the sum of £50,000, by which they were enabled to resume their labours, under the direction of Mr. Robert Whitworth, an engineer possessing a well earned reputation". The work was completed on the 28 July 1790.[2]

This magnificent canal commences in the River Forth, in Grangemouth Harbour, and near to where the Carron empties itself into that river. Its course is parallel with the Carron, and in nearly a westwardly direction, passing to the north of the town of Falkirk, and thence to Red Bridge, where it quits the county of Stirling, and enters a detached portion of the shire of Dumbarton. Hence it passes to the south of Kilsyth, and runs along the south bank of the River Kelvin, and over the Luggie Water, by a fine stone aqueduct, at Kirkintilloch; it then approaches within little more than two miles of the north-west quarter of the city of Glasgow, to which there is a branch communicating with the Monkland Canal at Port Dundas, near that city. The remaining part of the line is in a westwardly direction, crossing the Kelvin River by a noble aqueduct, and thence to the Clyde, into which, after running parallel with it for some distance, it locks down at Bowling's Bay, near Dalmuir Burnfoot.

The canal is thirty-five miles in length, viz, from Grangemouth to the east end of the summit pool, is ten miles and three quarters, with a rise, from low water in the Forth, of 155 feet, by twenty locks. The summit level is sixteen miles in length, and in the remainder of its course, there is a fall to low water, in the Clyde, at Bowling's Bay, of 156 feet, by nineteen locks.

The branch to the Monkland Canal at Glasgow is two miles and three quarters; and there is another cut into the Carron River, at Carron Shore, in order to communicate with the Carron Iron Works.

Though this canal was originally constructed for vessels drawing 7 feet, yet by recent improvements, sea-borne craft of 10 feet draught may now pass through it, from the Irish Sea to the German Ocean. The locks are 74 feet long and 20 wide; and upon its course are thirty-three draw-bridges, ten large aqueducts and thirty-three smaller ones; that over the Kelvin being 429 feet long and 65 feet above the surface of the stream. It is supplied with water from reservoirs; one of which, at Kilmananmuir, is seventy acres, and 22 feet deep at the sluice; and that at Kilsyth is fifty acres in extent, with 24 feet. water at its head.[2]

Between 1789 and 1803 the canal was used for trials of William Symington's steamboats, culminating in the Charlotte Dundas, the "first practical steamboat".

Passenger boats ran on the canal from 1783, and in 1809 fast boats were introduced, running from Edinburgh to Falkirk in 3 hours 30 minutes, providing such creature comforts as food, drink and newspapers. By 1812 they carried 44,000 passengers, taking receipts of more than £3450.

From 1828 there was a steamboat service, operated by Thomas Grahame's boat Cupid.[3]

The canal was designed by John Smeaton. Construction started in 1768 and after delays due to funding problems was completed in 1790. The geologist James Hutton became very involved in the canal between 1767 and 1774; he contributed his geological knowledge, made extended site inspections, and acted both as a shareholder and as a member of the management committee. The Union Canal was then constructed to link the eastern end of the canal to Edinburgh.

In 1842 an Act of Parliament was obtained authorising the Caledonian Railway to take over the Forth and Clyde Canal along with the Forth and Cart Canal, although this did not take effect until 1853. 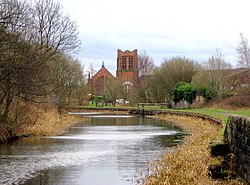 The branch from Maryhill to Port Dundas

Run down and revival

In 1963 the canal was closed rather than construct a motorway crossing, and so it became disused and semi-derelict. Canal locks in the Falkirk area on the Union Canal near the connection to the Forth and Clyde canal had been filled in and built over in the 1930s.

As part of the millennium celebrations in 2000, National Lottery funds were used to regenerate both canals. A boatlifting device, the Falkirk Wheel, was built to connect the two canals and once more allow boats to travel from the Clyde or Glasgow to Edinburgh, with a new canal connection to the River Carron and hence the River Forth. The Falkirk Wheel opened on 27 May 2002 and is now a tourist attraction.

The Port Dundas branch has been re-connected to Pinkston Basin, which once formed the terminus of the Monkland Canal, by the construction of 330 yards of new canal and two locks. The project cost £5.6 million,[4] and the first lock and intermediate basin were opened on 29 September 2006. Opening of the second lock was delayed by a dispute over land ownership.[5] 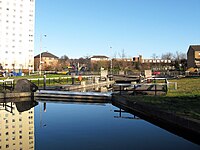 The unique Drop Lock at Dalmuir 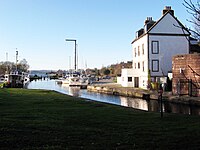