Dorking is a town in Surrey. A historic market town, it stands at the foot of the North Downs.

The evolution of Dorking has been kind to the town centre. Much of the original character survives, whilst accommodating businesses that serve the needs of the 21st century. The town is well known for its antique dealers.

The town's three main trading streets of High Street, West Street and South Street are complemented by a small open-air shopping centre, St Martin's Walk, which is adjacent to the town's main car park and easily accessed from the High Street.

In the late 1990s Dorking Halls was given a huge refit, to make it a cinema and theatre complex. In 2003, a new modern leisure centre and swimming pool were added to the Dorking Halls Complex. 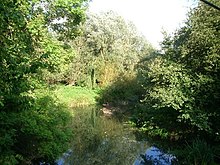 The Mole near Dorking

Just north of the town, the River Mole cuts a steep-sided valley through the North Downs. On the left bank is Denbies Vineyard, the largest vineyard in Britain while [1] on the right bank is Box Hill, owned by the National Trust and Britain's first Country Park. The hill has been designated a Site of Special Scientific Interest, because of the large number of rare orchids which grow there in the summer.

Further north is Norbury Park which contains the Druids Grove, a forest of ancient yew trees, some of which are more than 1,000 years old.

Further to the south west of the town, south of the scarp of the Downs, Leith Hill rises, its summit the highest point in Surrey. Leith Hill is also owned by the National Trust. The natural summit is 965 feet, but a tower built on top of the hill take sit up to 1,000 feet. Along with the adjacent hills of Holmbury Hill and Pitch Hill, as well as the nearby escarpment of the North Downs from Box Hill to Newlands Corner, the area is known as 'The Surrey Hills Area of Outstanding Natural Beauty'.

A new species of fish-eating dinosaur, Baryonyx walkeri, was discovered in clay pits just south of Dorking. The creature had a long curved claw on each hand and remains of its last meal were discovered fossilised in its ribcage. The skeleton can be seen at the Natural History Museum in London. One disused clay pit (Inholms Lane) is now open to the public as a nature reserve. 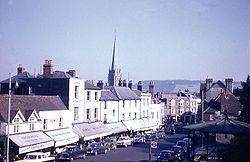 South Street in Dorking in about 1959 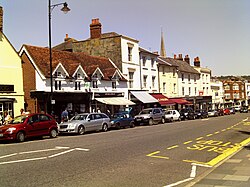 South Street in Dorking in May 2009

Dorking began life as a small staging post on Stane Street, the Roman road which ran from Chichester to London.

Dorking appears in Domesday Book of 1086 as the Manor of Dorchinges. It was held by The king. Its assets were: one church, 3 mills worth 15s 4d, 16 ploughs, 3 acres of meadow, woodland and herbage worth 88 hogs. It rendered £18.[2] Subsequent Lords of the Manor were to include the Dukes of Norfolk, who lived in Dorking until they moved to Arundel. One of them is buried in Dorking churchyard.

In the Middle Ages, Dorking was a prosperous agricultural and market town, benefiting from its position on the junction of a number of important roads and tracks.

In 1750, the construction of a Turnpike Road made Dorking a staging post on the route to Brighton and the coast. The Bull’s Head in South Street had a famous coachman, William Broad, whose portrait hangs in Dorking Museum in West Street. The inn that now dominates the centre of Dorking, the White Horse, was developed in the 18th century; previous buildings on this site having belonged to the Knights Templar and later the Knights of St John.

Dorking held a big wheat and cattle market in the High Street. The poultry market was held in the corner of South Street and round Butter Hill. Here the famous Dorking fowl were sold. This breed which has 5 claws instead of the normal four, was a favourite for 19th century tables, including Queen Victoria's.

Dorking lost its stage coaches when the railways arrived, but now attracted wealthy residents who built large houses in and around Dorking, such as Denbies House and Pippbrook House (now the library, with Council Offices in the grounds). Surrounding land and beauty spots such as Cotmandene and Box Hill were donated by landowners for public use and this, together with later planning controls, has enabled Dorking to remain one of the most pleasant towns within convenient reach of London, having escaped much of the modern development witnessed by its neighbours.[3]

A rough-and-tumble game of village football was once played in Dorking on Shrove Tuesday. The two sides were unlimited in number, representing the east and west of the town and the goals were the two bridges on the Pipp Brooke. The Town Crier kicked the first ball off at 2 o' clock. Three balls were kept in play; the Boys' Ball started the youngsters in the game, then two others as the day went on. The game was started at the Church gates and was "rioted" up and down the High Street until play was stopped at 6 o'clock.

The game was ended in the late nineteenth century after complaints by tradesmen and it was officially stopped under Section 72 of the Highway Act 1835. The last game was broken up by the police on Shrove Tuesday of 1897, and over the next ten years or so attempts at a revival were suppressed and players found themselves before the magistrates. The cross-frame with which the opening procession was led through the town is kept in the Dorking's town museum.[4]

The Battle of Dorking

The Battle of Dorking is a fictional short story written by Lt Col Sir George Tomkyns Chesney in 1871. The story describes a fictional invasion and conquest of Britain by Prussia, including an account of a disastrous battle at Dorking.

The book was an immediate success and, as the writer intended, it spurred action in high places. Plans were drawn up for dealing with any invasion, and a line of forts was built on the Downs, of which an abandoned and decayed example is found on the top of nearby Box Hill. The book boosted the volunteer movement and it triggered an explosion of what came to be known as "invasion literature". 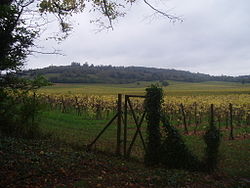 Beneath the town lie the Dorking Caves which are open occasionally to the public.

Dorking has a museum, a library, about thirty pubs and a CIU affiliated club. It is noted for its antique and art shops on West Street.

The Dorking Halls is a complex with a cinema, theatre, leisure centre and swimming pool. There is also an "Arts Alive" Festival which takes place annually during the last two weeks of October. Dorking Halls is also yearly host to a professional pantomime which was re-introduced in December 2006, after several years of hosting Zippo's Circus.

Near to Dorking lies the Leith Hill area, along with the adjacent hills of Holmbury Hill and Pitch Hill, as well as the nearby escarpment of the North Downs from Box Hill to Newlands Corner. As a whole this area is known as 'The Surrey Hills'.

The Dorking Group of Artists exhibit locally twice a year, in Betchworth and at Denbies.[5] They celebrated their 60th anniversary in 2007.

Each year in April, the town plays host to the Leith Hill Music Festival for choirs, a festival founded by Ralph Vaughan Williams in 1905. The present festival conductor is Brian Kay.[6]