Tynemouth is a town and a historic borough in Northumberland, at the mouth of the River Tyne, between North Shields (on the Tyne) and Cullercoats (on the coast to the North). It had a recorded population of 17,056 at the 2001 census.[1]

An aerial shot of the Tynemouth Castle, taken at 1917, which was a major coastal fortress and the control centre of the Tyne defences, which stretched from Sunderland to Blyth.

The headland towering over the mouth of the Tyne has been settled since the Iron Age. The Romans occupied it. In the 7th century a monastery was built there and later fortified. The headland was known as PEN BAL CRAG:

The place where now stands the Monastery of Tynemouth was anciently called by the Saxons Benebalcrag
—John Leland, at the time of Henry VIII

The queens of Edward I and Edward II stayed in the Priory and Castle while their husbands were campaigning in Scotland. King Edward III considered it to be one of the strongest castles in the Northern Marches. After the Battle of Bannockburn in 1314, Edward II fled from Tynemouth by ship.

A village had long been established in the shelter of the fortified Priory and around 1325 the then Prior built a port for fishing and trading. This led to a dispute between Tynemouth and the more powerful Newcastle over shipping rights on the Tyne which continued for centuries.

Tynemouth's Parish Church is the Church Of The Holy Saviour in the Parish of Tynemouth Priory. It was built in 1841[3] as a chapel of ease to the main Anglican church in the area, Christ Church, North Shields.

In Front Street there were two other churches, the Roman Catholic church named Our Lady & St Oswins,[4] opened in 1899, and also Tynemouth Congregational Church, which closed in 1973[5] and is now a shopping arcade.

In the late 18th century, sea-bathing became fashionable in Tynemouth from its east-facing beaches. King Edward's Bay and Tynemouth Longsands are very popular with locals and tourists alike. Tynemouth is also a surfing championship venue.

Prior's Haven is a small beach within the mouth of the Tyne, sheltered between the Priory and the Spanish Battery, with the Pier access on its north side. It was popular with Victorian bathers and is now home to the local rowing and sailing clubs.

King Edward's Bay (possibly a reference to Edward II) is a small beach on the north side of the Priory, sheltered on three sides by cliffs and reached by stairways, or, by the fit and adventurous who understand the weather and tides, over the rocks round the promontories on the north or south sides.

Longsands is the next beach to the north, an expanse of fine sand 1200 yards long, lying between the former Tynemouth outdoor swimming pool and Cullercoats to the north.

A statue of Queen Victoria by Alfred Turner, unveiled on 25 October 1902, is situated at the edge of the Village Green which is home to the War Memorials for the residents of Tynemouth lost during the Second Boer War of 1899-1902. Designed by A.B. Plummer, it was unveiled on 13 October 1903 by William Brodrick.

The larger central memorial is made of white granite with a cruciform column rising from between four struts in a contemporary design for its time. The front face has a relief sword and wreath carved onto it with the inscription below. The other three faces hold the honour roll for those lost during both World Wars. It was unveiled in 1920 and the designer is unknown.

Maintaining transport links between Tynemouth and Newcastle is Tynemouth Metro station, originally opened in 1882 as a mainline station catering for the thousands of holiday-makers who flocked to the Tynemouth beaches. Its ornate Victorian ironwork canopies have earned it Grade II listed status. They were restored in 2012, providing a venue for exhibitions and other events.[6] 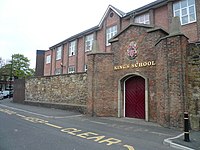 Located on Huntington Terrace, The King's School, is a co-educational, independent day school with over 800 pupils aged between 4 and 18. Though founded in Jarrow in 1860, the school moved to its present site in Tynemouth in 1865 originally providing a private education for local boys. The school has an Anglican tradition.

The School's name is in reference to the three ancient kings buried at Tynemouth Priory: Oswin, Osred and Malcolm III. Its most famous old boy is Stan Laurel, one half of the comedy duo Laurel and Hardy. Hollywood film director Sir Ridley Scott also attended the school.

This massive stone breakwater extends from the foot of the Priory some 900 yards out to sea, protecting the northern flank of the mouth of the Tyne. It has a broad walkway on top, popular with Sunday strollers. On the lee side is a lower level rail track, formerly used by trains and cranes for loading ships. At the seaward end is a lighthouse. The pier's construction took over 40 years (1854–1895). In 1898 the original curved design proved inadequate against a great storm and the centre section was destroyed. The pier was rebuilt in a straighter line and completed in 1909. A companion pier at South Shields protects the southern flank of the river mouth.

This headland dominates the river mouth. It takes its name from the Spanish mercenaries who manned guns there in the 16th century to defend against invasion. It continued to be used in this way for naval guns until the early 1950s. It is now a popular vantage point for watching shipping traffic on the Tyne.

Beyond the Battery and commanding the attention of all shipping on the Tyne is the giant memorial to Lord Collingwood, Nelson's second-in-command at Trafalgar, who completed the victory after Nelson was killed. Erected in 1845, the monument was designed by John Dobson and the statue was sculpted by John Graham Lough. The figure is some 23 feet tall and stands on a massive base incorporating a flight of steps flanked by four cannons from The Royal Sovereign - Collingwood's ship at Trafalgar.[7]

These rocks in the Tyne near the Monument are covered at high water and over the centuries have claimed many ships who "switched off" after safely negotiating the river entrance. In 1864, the Middens claimed 5 ships in 3 days with many deaths, although the wrecks were only a few yards from the shore.

Tynemouth is the end point for the 140-mile long Sea to Sea Cycle Route from Whitehaven or Workington in Cumberland.[8]

Undersea aquatic park, containing seahorses, sharks, giant octopus, frogs, otters and many other creatures. It Seal Cove a purpose-built outdoor facility providing an environment for a captive-bred colony of harbour seals.
The 500,000-litre pool includes rocky haul-out areas and underwater caves, specially created to ensure marine mammals are kept in near natural conditions.
A ramped walkway and viewing panels have been provided so visitors have an opportunity to admire the creatures from both above and below the waterline.

North Shields Fish Quay is a fishing port located close to the mouth of the River Tyne in North Shields, 8 miles east of the city of Newcastle upon Tyne.

The quay began life in 1225 as a simple village of shielings (huts) from which the town of North Shields takes its name. The quay was originally located here to serve the nearby Tynemouth Castle and Priory.

The growth of North Shields was at one time restricted due to fear that it would take trade from neighbouring Newcastle upon Tyne, which was the region's leading port at the time.

Clifford's Fort, located on the Fish Quay was built in the 17th century (1672) as a coastal defence against the Dutch. The Fort also played a role during the Napoleonic Wars. The fort was named after Lord Clifford of Cabal. It is now a scheduled Ancient Monument.

Every Spring Bank Holiday (since 1987) the Fish Quay hosts a mammoth free family festival, with hundreds of stalls and entertainments stretching the full length of the Quay. The Fish Quay Festival generally has several stages featuring different styles of music from the area and around the world, along with copious amount of food, and the traditional "blessing of the fleet". The Festival was sponsored by the mobile phone company Orange in 2001 and 2002 and was known as the Orange WOW (Window on the World) festival at that time but they discontinued their support. Jack Gibbon, the original founder of the Fish Quay Festival quoted when he first started this to the local newspaper the Evening Chronicle, that he was "extremely delighted" with how the festival went, and hoped it could turn into an annual event.

The 2001 was held over the weekend of 26–28 May. The line up included The Levellers and Arthur Brown.

The 2002 line up included performances from over 80 artists and bands from all over the world, including Bob Geldof and Iona. There were five stages of music - Jazz, Dance, World Music, folk music and local bands. It was the biggest free festival in Europe, attracting thousands of visitors.

The festival was scaled back in 2003.

In 2006 the council discontinued the Fish Quay Festival, due mainly to the longterm redevelopment work (including construction work) that was ongoing on the Fish Quay. A council report recommended that the future of the festival should be heritage-based.

Starting in 2005 and continuing annually, the Mouth Of Tyne Festival (also known as the MOTFest) expands upon the Fish Quay Festival. It is staged in Tynemouth and South Shields on the opposite bank of the Tyne and includes live world music, cultural performances, processions and pyrotechnics, as well as art displays.

Tynemouth Pageant is a community organisation devoted to staging an open-air dramatic pageant every three years in the grounds of Tynemouth Castle and Priory, by kind permission of English Heritage who run the historic monastic and defensive site at the mouth of the River Tyne.[9]