South Shields is a coastal town in County Durham. It stands at the mouth of the River Tyne, the boundary with Northumberland over the water, and here stands Tyne Dock. South Shields is about 5 miles downstream from Newcastle upon Tyne in the latter county.

The town had a population of 82,854 recorded in 2001, which makes it the largest population centre of the Tyneside conurbation after Newcastle.

South Shields is a working town. It was built on the docks and the industry that came with them, shipping coal and the produce of industry. The coal mines have closed, and hardship come to the town, but the port, the Port of Tyne, remains one of the most important ports in the kingdom, and now instead of dispatching coal, it is importing it; two million tons a year. With it the factories and yards keep their wheels turning. 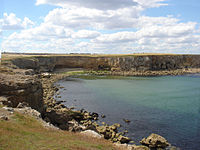 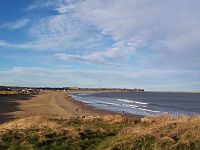 South Shields stands on a broad peninsula where the River Tyne meets the North Sea. It has six miles of coastline and three miles of river frontage, dominated by the massive piers at the mouth of the Tyne. These are best viewed from the Lawe Top, which also houses two replicas of cannon captured at Sebastopol.

The town slopes gently from the Cleadon Hills down to the river. Up on the Cleadon Hills stands a conspicuous Victorian water pumping station (opened in 1860 to improve sanitation) and a now derelict windmill, which are seamarks visible from out at sea.

The town has extensive beaches including sand dunes as well as dramatic Magnesian Limestone cliffs with grassy areas above known as The Leas, which cover three miles of this coastline and are a National Trust protected area. Marsden Bay, with its famous Marsden Rock, is home to one of the largest seabird colonies in Britain.

One of the most historic parts of the town is the quaint & beautiful Westoe village, which consists of a quiet street of 1st grade and 2nd grade Georgian and Victorian houses, many of which had been built by Victorian business leaders from the coal or ship industries in the town. Given its beautiful setting, parks and trees, this street was often the setting for a number of books by the novelist Catherine Cookson.[1]

Westoe village was once a separate village about a mile from South Shields but urban sprawl has now consumed it along with the village of Harton slightly further along the road to Sunderland. 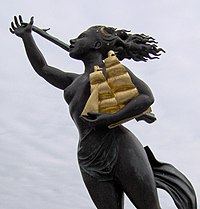 The Spirit of South Shields, by Irene Brown

People born in South Shields are considered to be Geordies, a term commonly associated with all residents of Tyneside.[2][3]

A less commonly used colloquial term is Sandancer. Locla folk argue over where the latter term comes from; maybe the town's beach, or with a 19th Century music hall act of the same name, or from the large Yemeni community.

Stone Age man, Iron Age folk and Romans have left their traces here; stone arrow heads and an Iron Age round house have been discovered on the site of the Arbeia Roman fort.

The Romans built the fort of Arbeia here around 160 AD, and expanded it around 208 AD to help supply their soldiers along Hadrian's Wall. Divisions living at the fort included bargemen from the Tigris, Spanish and Gallic soldiers, and Syrian archers and spearmen. The fort was abandoned as the Roman Empire declined in the fourth century AD.

It is believed that the old Roman site was reoccupied in the Anglo-Saxon period to serve as a Northumbrian royal residence for records say that Oswin, son of King Oswald was born within ‘'Caer Urfa’’. Much of the ruins still exist today, and some structures have been rebuilt as part of a modern museum.

The current town was founded in 1245 and developed as a fishing port. The name South Shields developed from the 'Schele' or 'Shield'; a shieling or a small dwelling used by fishermen. Salt-panning expanded as an industry in the 15th century, polluting the air and surrounding land. In 1644 During the English Civil Wars, a Covenanter army from Scotland, in alliance with the forces of Parliament, captured South Shields in order to aid the Parliamentarians’ ongoing siege of Newcastle. At that time the town has a small fort, which fell to the Covenanters, giving them control of the mouth of the Tyne and forcing the Royalist force to flee south, leading to the Battle of Boldon Hill.

In the 19th century, coal mining, alkali production and glass making led to a boom in the town. Population increased from 12,000 in 1801 to 75,000 by the 1860s (bolstered by economic migration from elsewhere in the British Isles. These industries played a part in creating wealth both regionally and nationally. In 1832, with the Great Reform Act, South Shields and Gateshead were given their own Member of Parliament and became boroughs; this exempted them from the authority of the Bishop of Durham, and their taxes went to the Crown instead. The rapid growth in population brought on by the expansion of industry made sanitation a problem as evident by Cholera outbreaks and the building of the Cleadon water tower to combat the problem. In the 1850s 'The Tyne Improvement Commission' began to develop the river, dredging to make it deeper and building the large piers to help prevent silt buildup of the channel. Shipbuilding previously (along with coal mining) a monopoly of the Freemen of Newcastle became another prominent industry in the town with John Redhead's Yard being the largest.

The ships brought trade but also new populations; Yemeni Arabs arrived and a substantial Yemeni community established itself has been in South Shields.

During First World War German Zeppelin airships bombed South Shields in 1915. Later during Second World War The German Luftwaffe repeatedly attacked the town and caused massive damage to industry and killed many residents. Gradually throughout the 20th century, the coal and shipbuilding industries ceased. Unemployment is still a problem in South Shields. In the 21st century, most of the town's populace work in the cities of Sunderland and Newcastle upon Tyne in the public sector/service sector; with a small minority working in service industries/retail and the ever increasing role of tourism in the local economy.

The last shipbuilder, John Readhead & Sons, closed in 1984 and the last pit, Westoe Colliery, in 1993. Today, the town relies largely on service industries, whilst many residents commute to work in nearby Newcastle, Gateshead, north Tyneside and Sunderland.

Despite a skilled local workforce, for many years the towns on the south bank of the Tyne had the highest unemployment rate in mainland Britain, although between December 2002 and December 2008 unemployment in South Shields fell by 17.8%, and that of these towns by 17.7%, the best performance in the North East region over that time period.

The Port of Tyne is one of the United Kingdom's most important and is further developing its freight and passenger activities. In 2007, it imported two million tons of coal. Manufacturing and ship repair/engineering are other significant sectors.

South Shields benefits from significant public and private sector investment. More recently this has included primarily the town centre, riverside and foreshore areas, given the decline of once-traditional heavy industries with the town's growing importance as a major commercial centre and tourist destination. 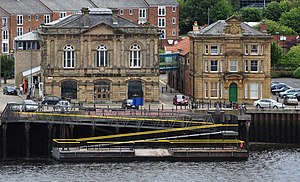 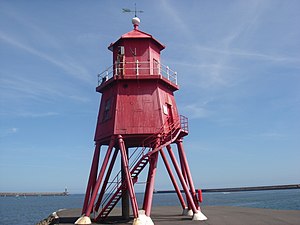 As well as being the oldest and largest town in south Tyneside, South Shields is also one of the region's most popular seaside resorts. The area markets itself as Catherine Cookson Country, which attracts many visitors. Further improvements and developments to the seafront are planned.[5]

The town and region include:

There is a good choice of restaurants, cafés, public houses and nightlife as well as hotels, guest houses and caravan parks. South Shields plays host to an annual free summer festival and each autumn the town is the seaside finish to the world-famous Great North Run.

It is also home to the legendary Colman's of South Shields Fish and Chip Restaurant and Takeaway, winners of countless regional and national food awards. Colman's also provided their famous Fish and Chips for the Queen's birthday party at the British Embassies in Guatemala and Rome. http://www.colmansfishandchips.com[6][7][8]

Most of the townsfolk support either Newcastle United or Sunderland AFC.

South Shields is bounded by the A19]] trunk road to the West and situated close to the Tyne Tunnel at Jarrow. The town is well connected to other areas of Tyne & Wear and to the strategic road network - the A194(M) motorway provides a direct link between the Borough and the A1/A1(M).

There is a frequent pedestrian ferry service to North Shields on the opposite bank of the River Tyne. The Shields Ferry carries tens of thousands of commuters and pleasure trippers each year. There has been a cross-river ferry service between the two towns since 1377.[9]

The Port of Tyne headquarters and international freight terminal are located at Tyne Dock in South Shields. The Port has a freight rail connection.