The town was formerly at a crossroads for both road and rail; however the A6 now bypasses the town to the east and the A14 which carries east-west traffic is 6 miles to the south. The town is served by East Midlands Trains with direct services to Leicester, Nottingham, Derby and St Pancras International, London.

Market Harborough is in an area which was formerly a part of the Rockingham Forest, a royal hunting forest used by the mediæval kings starting with William I. The forest's original boundaries stretched from Market Harborough through to Stamford and swallowed up Corby, Kettering, Desborough, Rothwell, Thrapston and Oundle. 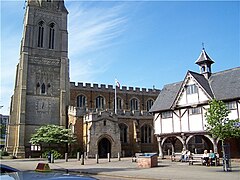 The centre of the town is dominated by the steeple of St. Dionysius Parish Church which rises directly from the street, as there is no churchyard. It was constructed in grey stone in 1300 with the church itself a later building of about 1470. Next to the church stands the Old Grammar School, a small timber building dating from 1614. The ground floor is open, creating a covered market area and there is a single room on the first floor. It has become a symbol of the town. The nearby square is largely pedestrianised and surrounded by buildings of varying styles. The upper end of the High Street is wide and contains mostly unspoiled Georgian buildings.

The name of Harborough is likely to derive from the Anglo-Saxon "haefera-beorg"; "Oat hill".

Market Harborough is in a rural part of southern Leicestershire, on the River Welland and across the Northamptonshire border. The town is about 15 miles south of Leicester on the A6, 17 miles north of Northampton on the A508 and 10 miles northwest of Kettering. The town is near the A14 west-east trunk road.

The Midland Main Line railway connects to London St Pancras International. A branch of the Grand Union Canal terminates in the north part of the town and connects to the main canal near Foxton and the Foxton Locks. 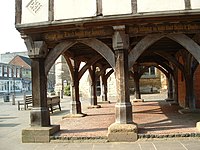 The Domesday Book records Bowden as a Royal Manor organised in seventy-three manors. The population lived in three villages, Great Bowden, Arden and Little Bowden. The Manor of Harborough is first mentioned in 1199 and 1227 when it was called "Haverberg". It is likely that Harborough was formed out of the Royal Manor with the intention of making it a place for tradesmen and a market when a new highway between Oxendon and Kibworth was established to help link Northampton and Leicester. A chapel dedicated to St Dionysius was built on the route, whilst St Mary in Arden retained Parish Church status.

A market was established by 1204 and has been held on a Tuesday ever since 1221. The tradesmen of Harborough had large tofts or farm yards at the rear of their property where goods were made and stored. Many of these yards remain but have been subdivided down their length over the years to give frontage to the High Street

The Steeple of Harborough Church was started in 1300 and completed in 1320. It is a broache spire, which rests on the walls of the tower, and are earlier than recessed spires which rise from behind a square tower as at Great Bowden. By 1382 the village of Arden had been abandoned, although the Church remained in use for some years. In 1470 the main part of Harborough Church was completed. An open stream ran down the High Street. The Town Estate was created and managed by a body of Feoffees elected by the townspeople, to help manage among other things the Open Fields surrounding the town, the proceeds from which were used for a variety of purposes. From 1570 the Town Estate owned several properties within the town.

During the Civil War in June 1645 the town became the headquarters of the King's Army. In Harborough, the King decided to confront Parliamentary forces who were camped near Naseby but the Battle of Naseby proved a decisive victory for Parliament led by Oliver Cromwell. Harborough Chapel became a temporary prison for the captured forces. Cromwell wrote a letter from "Haverbrowe, June 14, 1645" to the Speaker of the House of Commons, William Lenthall, announcing the victory.

An Independent Church was established in the Harborough area following the 1662 Act of Uniformity and a Meeting House was built in Bowden Lane in 1694.

During the 18th century the timber mud and thatch buildings of the town were largely replaced with brick buildings. After roads were turnpiked and regularly repaired (making wheeled traffic easier all year round) Harborough became a staging point for coach travel on the road to London from the North West and the Midlands. In 1776 the Open Fields of Great Bowden were allotted to individual owners and fenced with hedges planted, followed by those of Little Bowden in 1780.[1]

In the 19th century, the increasing level of heavy goods traffic on the turnpike roads led to complaints. A plan for a canal from Leicester to join the London to Birmingham canal was mooted but it eventually bypassed the town and a branch canal was cut from Foxton to Harborough with wharves at Gallow Hill, and Great Bowden. Harborough wharf, to the north of the town, became a distribution centre for coal and corn. A gas company was formed in 1833 to make and distribute gas. John Clarke and Sons of London built a factory for spinning worsted and later making carpets. Other industries developed were a brickworks, brewery, wheelwright/coachworks and the British Glues and Chemicals works by the Canal at Gallow Hill. In the 1830s a union of parishes around Market Harborough was formed to look after the poor and a workhouse was built in 1836 on the site of St Luke's Hospital. In 1841 Thomas Cook who was a wood turner and cabinet maker in the town organised the first group travel by rail from Leicester to Loughborough and went on to found the travel agency bearing his name.

Market Harborough became a centre for fox hunting during the 19th century when Mr Tailby of Skeffington Hall established a hunt in South East Leicestershire in 1856. The country between Billesdon and Harborough was considered severe, involving jumping the specially designed ox fences. His hunting diary is recognised as an important document in the history of hunting. The Hunt was renamed the Fernie after a subsequent Master.

The Grand National Hunt Steeple Chase was held to the south west of the town in 1860, 1861 and 1863. This race and the meeting eventually developed into the Cheltenham Festival and the organisers were part of the founding of organised steeplechasing through the Grand National Hunt Committee.[2]

The building of the Leicester–Rugby railway in 1840 closed the town's coaching trade, butMarket Harborough was cut off from te railway until a station opened in 1850 on a line from Rugby. Industry followed.

There was a rapid expansion in the town's population from 4,400 in 1861 to 7,700 in 1901, resulting in severe overcrowding in the old town and poor conditions until the building of much delayed improvements in sanitation.

A covered Market Hall was opened at the western end of the Cattlemarket in 1938, replacing the market stalls on the Square on Tuesdays and Saturdays.

In 1968 the centre of Market Harborough was declared a conservation area. Major developments included the development of headquarters for Golden Wonder crisp makers, and the demolition of the old Symington factory in Adam and Eve Street for redevelopment as Eden Court shops and flats.

In 1993 the former cattle market, bus station, indoor market and several properties next to the old post office and the Peacock Hotel were re-developed to form a new pedestrianised shopping centre called St Mary's Place. This included a supermarket.

A footpath and cycleway alongside the canal to Foxton became part of the National Cycle Network Route 6. The path continues south following the Brampton Valley Way a long and narrow recreation area on the route of the former railway line to Northampton.

The Canal Basin was restored as a boating centre called Union Wharf. This consists of workshops, restaurant, studios and apartments. There are residential moorings and canal boats can be hired.

A cycle and footway along the river through the town was created called the Millennium Mile and links Welland Park with the railway station. In 2007 Welland Park was awarded Green Flag Award status and in 2008 a large new children's play area was opened.

The Church of England parish church is dedicated to Saint Dionysius, and is of a broach spire construction. It dates back to the 14th century but has been added to since.[3]

The Old Grammar School is an unusual former grammar school in the town centre which stands on wooden stilts: the school room had to be built upon posts to allow the butter market to be held on the ground floor. The School was founded in 1607 and built in 1614, through the generosity of Robert Smyth, a poor native of the town who became Comptroller of the Lord Mayor's Court of the City of London and member of the Merchant Taylors' Company.

Running around the building are five portions of scripture from the Bible. They are:

The Lord build the house, they labour in vain that build it: except the Lord keep the city, the watchman waketh but in vain
—Psalm 127:1

I was glad when they said unto me, Let us go into the house of the Lord
—Psalm 122.1

Seek ye first the kingdom of God, and his righteousness; and all these things shall be added unto you
—Matthew 6.33

For by grace are ye saved through faith; and that not of yourselves: it is the gift of God:not of works, lest any man should boast
—Ephesians 2:8-9[4]

Three miles north west of the town are the Foxton Locks; ten canal locks constituting two "staircases" each of five locks, on the Leicester line of the Grand Union Canal. It is named after the nearby village of Foxton.

There is a leisure centre with a swimming pool, gym, sauna, steam room and café.