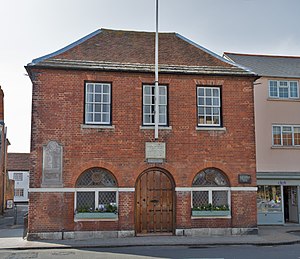 Yarmouth is a port town of Hampshire, on the western coast of the Isle of Wight. The town is named for its location at the mouth of the small Western Yar river. (The Eastern Yar is elsewhere on the island).

Yarmouth is a crossing point for the river, originally with a ferry, replaced with a road bridge in 1863.[1]

Yarmouth has been a settlement for over a thousand years, and is one of the very earliest on the Isle of Wight. The first record of a settlement here was in King Ethelred the Unready's record of the Danegeld tax of 991. It was originally called Eremue, meaning "muddy estuary". The Normans laid out the streets of Yarmouth on the grid system, a plan which can still be seen in the layout today. It grew rapidly, being given its first Charter as a town in 1135.[1] The town became a parliamentary borough in the Middle Ages which was represented by two members of Parliament until the Reform Act in 1832.[1]

Until the building of the castle, regular raids on the island by the French continued, and in 1544 the town of Yarmouth was reputed to have been burned down. Legend has it that the church bells were carried off to Cherbourg or Boulogne.[1]

Yarmouth Castle was built in 1547. It survives, and is now in the care of English Heritage.[2] It is effectively a gun platform built by Henry VIII to strengthen the Solent and protect the Isle of Wight, historically an important strategical foothold for any attempted invasion of England.

In St James's Church there is a monument to the 17th-century admiral Sir Robert Holmes who based his operations at Yarmouth. He obtained the sculpture in a raid on a French ship, when he seized an unfinished statue of Louis XIV of France and forced the sculptor to finish it with his own head rather than the king's.[3]

Yarmouth Pier was opened in 1876. It received Grade 2 listed status in 1975. Originally 685 feet long, it's now 609 feet but is still the longest timber pier in Britain open to the public, and is a docking point for the MV Balmoral and PS Waverley.

The parish was once served by its own railway station]], with services to Newport. Passenger services ended in 1953, and the track has long since been removed; the trackbed between Yarmouth and Freshwater has been converted into a bridleway.

As a port and market town Yarmouth has long had local commercial significance. It still has some boat yards and chandlery, and although relatively small in size it still supports a number of shops, hotels, pubs and restaurants, supported partly by passing trade from the ferry terminal and by visiting yacht-owners in the harbour.

Yarmouth marina is also the landing point for the Royal Navy's Solent Amphibious Challenge held in June of every year. .[5]