Clevedon is a port and seaside resort town in Somerset, on the Severn Estuary down the coast south of Bristol. It has a recorded population of 21,957 in 2001.

The town is amongst a group of small hills alongside the Severn estuary, including Churchill, Wain's hill (which is topped by the remains of an Iron Age hill fort), Dial hill, Strawberry hill, Castle hill, Hangstone hill and Court Hill which is a Site of Special Scientific Interest. Clevedon was mentioned in the Domesday Book but did not really grow until the Victorian era when Clevedon became a popular seaside town. It was served by a short branch line from the main railway at Yatton, between 1847 and 1966.

The seafront includes ornamental gardens, a Victorian bandstand, and other visitor attractions. The Salthouse Field has a light railway running round the perimeter and is used for donkey rides during the summer. The shore is a mixture of pebbled beaches and low rocky cliffs, with the old harbour being at the western edge of the town at the mouth of the Land Yeo. The rocky beach has been designated as the Clevedon Shore geological Site of Special Scientific Interest. Clevedon Pier was opened in 1869, one of the earliest examples of a Victorian pier still in existence in the United Kingdom. During the 20th century it fell into disrepair but was dismantled, restored and rebuilt, reopening in 1986. Other landmarks include Walton Castle, Clevedon Court, the Clevedon clock tower and the Curzon cinema.

Clevedon has a certain amount of light industry, mainly in industrial estates including Hither Green Trading Estate near the M5 motorway junction, and it is also a commuter town for Bristol. 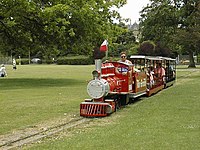 Clevedon is on and round seven hills called Churchill, Wain's Hill (which is topped by the remains of an Iron Age hill fort),[1] Dial hill, Strawberry hill, Castle Hill, Hangstone hill and Court Hill. On a clear day there are far reaching views across the Severn estuary to Glamorgan. When the visibility is particularly good the island of Lundy in the Bristol Channel can be seen. The tidal rise and fall in the Severn Estuary and Bristol Channel can be as great as 48 feet.[2]

The seafront stretches for approximately half a mile from the pier to Salthouse Field, and includes ornamental gardens, a Victorian bandstand, a bowling green, tennis courts, crazy golf and other amusements. An addition to this list is Marine Lake, which was once a Victorian swimming pool, is now used for boating activities, as well as a small festival once a year where people can try out new sports. The Salthouse Field has a light railway running round the perimeter and is still used for donkey rides during the summer.[3]

The shore at Clevedon is a mixture of pebbled beaches and low rocky cliffs, with the old harbour being at the western edge of the town at the mouth of the Land Yeo river. It is remembered as the place at which John Ashley conceived of the idea of creating The Mission to Seafarers.[4] The rocky beach, which has been designated as the Clevedon Shore geological Site of Special Scientific Interest. It is the side of a mineralised fault, which runs east-west adjacent to the pier, and forms a small cliff feature in Dolomitic]] Conglomerate on the north side of Clevedon Beach, containing cream to pink baryte together with sulfides. The minerals identified at the site include: haematite, chalcopyrite, tennantite, galena, tetrahedrite, bornite, pyrite, marcasite, enargite and sphalerite. Secondary alteration of this assemblage has produced idaite, Covellite and other Copper sulphides.[5]

"Poet's Walk" is a footpath around Wain's Hill and Church Hill, to the south west of the seafront, and the upper part of the town contains many other footpaths through parks and wooded areas which were laid out in the nineteenth century. The name of the walk is a commemoration of the poets and writers who have visited Clevedon. These include Coleridge in 1795 and Tennyson in 1834.[6]

The parish church is St Andrew's, which was built in the thirteenth century AD, although there are thought to be Saxon foundations under the present building. It is the burial place of Arthur Hallam, subject of the poem In Memoriam A H H by his friend Alfred, Lord Tennyson.[7]

The Church of St John was built in 1875, by William Butterfield for Sir Arthur Elton.[8] The Church of All Saints was built in 1861 by C E Giles.[9] The tower of Christ Church, on Chapel Hill, is a very important landmark in Clevedon. It was erected 1838 and 1839 from designs by Thomas Rickman in an early 14th century style.[10]

The Copse Road Chapel is an Independent Evangelical Church, which was built in 1851 and has been attributed to Foster and Wood of Bristol,[11] who also designed the United Reformed Church on Hill Road.[12]

Wain's Hill is a univallate Iron Age hill fort situated approximately a mile southwest of Clevedon. The hillfort is defined by a steep, natural slope from the south and north with two ramparts to the east.[13]

Clevedon was mentioned in the Domesday Book as being a holding of a tenant-in-chief by the name of Mathew of Mortaigne,[14] and was listed at that time as having eight villagers, and ten smallholders.[15]

The small rivers the Land Yeo and Middle Yeo supported at least two mills. The Tuck Mills lay in the fields south of Clevedon Court and were used for fulling cloth. The other mills were near Wain's Hill and probably date from the early 17th century.[16]

During the Victorian era Clevedon became a popular seaside town; before that it had been an agricultural village.[17] The Victorian craze for bathing in the sea was catered for in the late 19th century by saltwater baths adjacent to the pier (since demolished, though the foundations can still be seen), and bathing machines on the main beach.[18]

Clevedon was also home to St Edith's children's home for almost 100 years until it closed in 1974. The building on Dial Hill is listed,[19] and therefore the outside has changed little, but it now houses privately owned flats. The home was run by nuns from 'The Community of the Sisters of the Church' which is an international body of women within the Anglican Communion, living under the gospel values of Poverty, Chastity and Obedience.[20]

The first large scale production of penicillin took place in the town.[14] In 1938, Howard Florey was working at Lincoln College in the University of Oxford with Ernst Boris Chain and Norman Heatley, when he read Alexander Fleming's paper discussing the antibacterial effects of Penicillium notatum mould. He made arrangements for this to be grown in deep culture tanks at the Medical Research Council's Antibiotic Research Station in Clevedon, enabling mass production of this mould for the injections of the soldiers of Second World War who suffered from infections.[21]

Clevedon was served by a short branch line from the main railway at Yatton. It opened in 1847, six years after the main line itself,[22] but closed in 1966.[23] The site of the station is now Queen's Square, a shopping precinct.[24] The town was the headquarters for another railway, the Weston, Clevedon and Portishead Light Railway, which connected the three coastal towns in its name. It opened to Weston-super-Mare in 1897,[25] was extended to Portishead ten years later,[26] and closed in 1940.[27] Its trains crossed the road in the town centre, known as The Triangle, preceded by a man with red and green flags.[28]

Clevedon Pier and the Severn 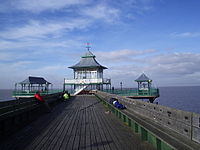 Clevedon Pier was opened on Easter Monday 1869,[4][29] one of the earliest examples of a Victorian pier still in existence in the United Kingdom. During the 20th century it fell into disrepair and in 1985 the pier was dismantled and taken to Portishead dock for restoration, and rebuilt in 1986. In 2001, the pier was upgraded to a Grade I listed building,[29] The PS Waverley and MV Balmoral offer day sea trips from Clevedon Pier to various destinations along the Bristol Channel and Severn estuary.[30] Adjoining the pier and contemporary with it is the Toll House, built in the style of a folly castle and provided as accommodation for the pier-master.[31] 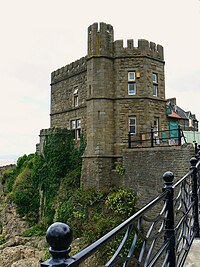 Walton Castle is a 17th-century fort located on Castle Hill, that overlooks the Walton St Mary area at the northern end of Clevedon. It was built sometime between 1615 and 1620. The castle was designed as a hunting lodge for Lord Poulett, a Somerset Member of Parliament. The Civil War saw the decline of Poulett's fortunes, and by 1791 the castle was derelict and being used as a dairy by a local farmer.[35] In 1984, the castle was purchased for £1 by Margarita Hamilton, who restored the building to its former glory.[36]

Clevedon Court is on Court Hill east of the town centre, close to the road to Bristol. It is one of only a few remaining 14th century manorial halls in England, having been built by Sir John de Clevedon circa 1320.[37] Since the early eighteenth century the house has been owned by the Elton family, who were responsible for much building work on the house and many improvements in the town, and although the house itself is now owned by the National Trust,[38] the associated estates are still owned by the Elton family. Sir Edmund Elton (1846–1920) was a potter who produced unusually shaped ware in a variety of richly-coloured glazes, including a gold glaze of his own invention, at the Clevedon Elton Sunflower Pottery.[39]

Clevedon clock tower in the centre of the town is decorated with "Elton ware".[40] It was completed in 1898, and donated by Sir Edmund Elton in celebration of Queen Victoria's Jubilee.[41] The Curzon Community Cinema was built as the Curzon cinema in 1912,[42] for Victor Cox,[43] and is the oldest purpose-built, continuously operated cinema in the world.[44]

The town's market hall on Alexandra Road was designed by local architect Hans Price.[45] A monument, known as the "Spirit of Clevedon", was erected near the seafront to mark the Millennium. It was designed by local citizens and includes panels and plaques representing the history and community in the town. Within its base is a time capsule containing information about the town.[46]

Literary figures associated with the town are Samuel Taylor Coleridge (who spent some months living in a cottage in the town after his marriage to Sarah Fricker),[47] William Makepeace Thackeray (a frequent guest of the Elton family at Clevedon Court), and George Gissing (The Odd Women is set in the town).