Bromfield is a village and parish in Shropshire, adjacent to the border with Herefordshire. The civil parish also incorporates part of the ancient parish of Stanton Lacy.

Bromfield is located near the market town of Ludlow, two miles north-west of the town centre, on the A49 road. The A4113 road](to Knighton) has its eastern end in Bromfield, at its junction with the A49.

The village is situated near the confluence of the River Teme and River Onny. The latter splits the village into two, with the church and many of the older buildings to the west and the recently redeveloped business area to the east (towards Ludlow). A bridge takes the main road over the river.

The manor of Bromfield, and separately Bromfield Priory, are recorded in the Domesday Book of 1086, falling within the Saxon hundred of Culvestan,[2] which was abolished in the reign of Henry I; Bromfield then came within Munslow Hundred. It was a large and well-populated manor. The ancient parish has a detached part at Halford.

Much of the parish, as well as the neighbouring parish of Stanton Lacy, is part of the Earl of Plymouth's Oakly Park Estate. Oakly Park is now the Plymouth family seat. 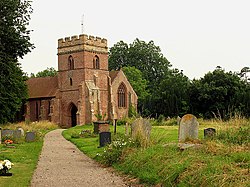 The village church is dedicated to St Mary the Virgin and is a Grade-I listed building.[3] There was, until the Dissolution of the Monasteries, a priory at Bromfield. As well as at Halford, the church also held lands at Ashford Bowdler.

Three-quarters of Ludlow Racecourse and the Ludlow Golf Club are located in the parish, to the northeast of the village. The Welsh Marches Line passes through the parish, between the village and the racecourse. A level crossing and manned signal box still exist, but the station once sited here closed in 1958.

The village now boasts a post office (open Monday-Friday only),[4] a hotel/restaurant/bar called "The Clive", a large local food centre ("The Ludlow Food Centre"), a smaller restaurant/cafe ("The Farmers Kitchen") and a garden/plant centre. These are all located adjacent to one another in a recently redeveloped business area by the A49 road.

Islabikes are based in the business area; they manufacture specialist bicycles, in particular for children.

National Cycle Network route 44 passes through the village, on its way between Bishop's Castle and Ludlow. It passes under the A49 by a subway, an unusual feature for a village in Shropshire.

This Shropshire article is a stub: help to improve Wikishire by building it up.
Retrieved from "https://wikishire.co.uk/w/index.php?title=Bromfield,_Shropshire&oldid=45116"
Categories: