Droitwich or Droitwich Spa is a town in Worcestershire, standing on the River Salwarpe.

The town is situated on massive deposits of salt, and salt has been extracted there since ancient times. The natural Droitwich brine contains 2½ lbs of salt a gallon - ten times stronger than sea water and only rivalled by the Dead Sea. Close by the High Street stands a pump now a monument, to the methods used latterly to pump brine from the ground even right in the middle of town. It is thus a monument to that which created the town and that which destroys it from beneath. Salt extraction shapes the town; in the High Street in particular a number of shops are appear all higgledy-piggledy with not a vertical or horizonal line in them; this is the result of the subsidence of the ground beneath the centre of the town due to salt extraction.

The name of the town is from Old English though with an uncertain prefix. It has also taken the modern suffix "Spa" from the name of a Belgian village.

The prefix "Droit" seems like the French for "right" but its early form is "Dright", which may be the Old English drit (dirt, mud), dryht (troop or company, or laundatory, grand or famous).

Droitwich was promoted as a spa town in the nineteenth century, and in this it adopted the name "Droitwich Spa". Though the spa craze has long passed, the name is still used.

In Roman times the village was known as Salinae, a salt town, and the town was located at the crossroads of several Roman roads. Railway construction in 1847 revealed Roman mosaic pavements, and later excavations unearthed a Roman villa or corridor house some 130 feet long.[3]

Droitwich has long been known for its salt springs, since Roman days, and these provided its main industry.

In 1042 an earthquake was noted in the Midlands and the note of it Anglo-Saxon Chronicle refers to three towns affected, Worcester, Droitwich and Derby, which indicates the relative importance of the town in those days.

Droitwich Lunatic Asylum was established in 1791. Records at the Worcestershire County Record Office show its presence in 1837 to 1838. An advert in the Transactions of the Provincial Medical and Surgical Association, in 1844, records that Martin Ricketts, of Droitwich, was the Surgeon and Sir Charles Hastings from the Worcester Infirmary was the Physician.

Droitwich remained a fairly small town until the 1960s, when the population was still barely 7,000, but since then it has grown considerably from overspill from Birmingham with many housing estates being developed in the 1970s and '80s.

In July 2007, Droitwich was hit heavily by the widespreads flooding of that year caused by some of the heaviest rainfall in many years. The flooding was pictured in the national news, having flooded the majority of the heavily subsided high street. Many shops in the high street remained closed almost a year later. The flooding crossed from the stream and canal in Vines Park, crossed Roman Way, and spilled across to the High Street some 100 yards from the source stream.

Following specialist inspections at Droitwich Spa Brine Baths on Friday 12 December 2008, the facility has been closed to allow further building investigations to take place and to avoid any potential hazard to the public or staff. 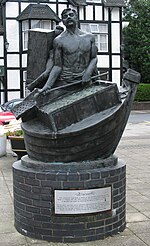 Saltworkers (by John McKenna) in the town centre

Rock salt and brine was extracted by the Romans and this continued through the Middle Ages. It produced fine revenue for the Crown through the salt tax levied until its abolition in 1825.

The Wintour family, a local family owned up to 25 salt evaporating pans locally by the 1600s.

Brine roses naturally to the surface under sub-artesian pressure at three sites along the River Salwarpe within Vines Park in the centre of Droitwich. This brine was unusually fully saturated with sodium chloride salt, and was extremely valuable because it was economic to boil, and the yield of salt was high. Because of its value the brine was divided into shares, one share comprising 6,912 gallons which produced eight tons of salt annually in the set boiling period. When it rained, particularly in the winter when brine was not being boiled, the rain water which is less dense that saltwater, settled at the top of the brine and was readily removed. Originally brine for boiling was extracted with buckets lowered into the pits which naturally refilled according to the water table. Upwich, 30 feet deep, and the deepest of the three pits, supplied most of the brine for this ancient industry, while the pit at Netherwich was only 18 feet deep.

Between Upwich and Netherwich is the Middlewich pit. It was affected by the drawing of brine at the other two pits and eventually it fell into disuse. Steynor, in the 17th century discovered the pit and set up business for himself, but eventually due to the lack of brine he failed to compete with the town monopoly.

The underground brine solutions were only 200 feet deep and in 1725 it was found that bore-holes could be sunk at the base of these pits to reach brine in unlimited quantities without having to rely on natural brine flow. At that point the monopoly ceased, and many entrepreneurs sought to buy land close to Upwich pit to ensure finding brine that was not affected by underground water channels that diluted these natural brines. With this increase in production and pumps that were now being used to draw brine, there was gradual subsidence in some parts of the town. After the monopoly ceased and commercial companies sank their own artificial wells all over Vines Park.[4]

In the mid 19th century, spas became popular and Droitwich was promoted as a spa town, becoming famous as such. Unlike other places, the medicinal benefits were not derived from drinking the spa water (which is almost saturated brine and undrinkable) but from the muscular relief derived by swimming and floating in such a dense, concentrated salt solution, at the town's brine baths (first opened in 1830). The spa water at Droitwich is the warmest in the United Kingdom outside Bath, but it does not meet the most common definition of a hot spring as the water is below standard human body temperature.

The original Brine Baths have long since closed, but a new brine bath (part of the Droitwich Spa private hospital) opened to the public for relaxation and hydrotherapy. But this too was closed in December 2008 due to a dispute between the operator and Wychavon District Council over health and safety inspections.

The salt industry was industrialised and developed in the 19th century by John Corbett who built the nearby Chateau Impney for his French-Irish wife in the French 'chateau' style. He was responsible for the redevelopment of Droitwich as a Spa.

Opened in the 1930s was the town's lido, a large open-air swimming pool, which used diluted brine from beneath the town. After many years of closure it was reopened in 2006. See: Droitwich Spa Lido 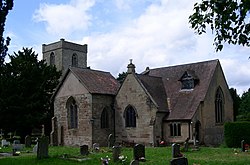 Collectively known as the Droitwich Canal, two canals met in the town centre; the Droitwich Barge Canal built by James Brindley in 1771 and the Droitwich Junction Canal built in 1854. The Junction canal linked Droitwich to the Worcester and Birmingham Canal. The canals were abandoned in 1939 but a restoration programme saw them re-opened in 2011.

Droitwich Spa railway station, built by the Great Western Railway, stands outside the town centre with trains to Birmingham, Worcester, Kidderminster and Stourbridge. 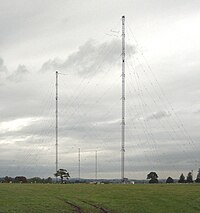 The Wychbold Transmitter near Droitwich is the central longwave broadcasting facility of the United Kingdom. Droitwich is also used for transmissions in the medium wave range at Droitwich transmitting station. The transmitter was sited near Droitwich because the huge block of underground salt provided a good ground earth and increased signal strength (as related by Mr. Humphreys, Chief Engineer for many years).

Droitwich shopping is mainly focused in the traditional town centre around Victoria Square, leading to the St Andrew's Square shopping centre and down to the original High Street, with its local pubs and an eclectic mix of traditional shops. Farmers' markets are also held regularly in Victoria Square.

In the central St Andrew's Square shopping precinct are several chain stores. The town also has a full range of banks.

The Raven Hotel is a wattle and daub hotel that holds a central position within the town.

On the outskirts of the town is the famous Chateau Impney, built in the style of a traditional French chateau, which is now a hotel, restaurant and conference centre.

The Norbury Theatre hosts regular shows year-round and has an active Youth Theatre.

Until the late 1990s Droitwich Spa Lido was open as a public open-air salt-water swimming pool. Following its closure various schemes were proposed, with significant legal and commercial arguments as to the viability of re-building and reopening this facility. During Autumn of 2006, work started on renovating the lido and it was reopened on Monday 18 June 2007. The Lido Park remains a pleasant and popular space, with Droitwich Cricket Ground on its edge as well as a bandstand with regular performances. 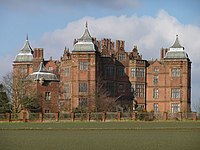