Bala is a pocket-sized market town in Merionethshire, lying at the north end of Bala Lake, 17 miles north-east of Dolgellau. It is little more than one wide street, the High Street. Nevertheless, Bala has served as the county town of Merionethshire.

In the 18th century, Bala was well known for the manufacture of flannel, stockings, gloves and hosiery. It is now a popular destination for summertime visitors, who come either for the beauteous scenery or for watersports on the lake or cycling in the hills.

The name of Bala is Welsh; bala means the outflow of a lake, as here the River Dee flows out of Llyn Tegid.

The Tower of Bala (Welsh: Tomen) is a tumulus or "moot-hill" 30 feet high by 50 feet in diameter, formerly thought to mark the site of a Roman camp.

Buildings that stands out in Bala is the large stone-built theological college, Coleg Y Bala, of the Calvinistic Methodists and the grammar school, which was founded in 1712. A statue stands in the town of the Rev Thomas Charles (1755–1814), the theological writer who was driving force in the creation of the British and Foreign Bible Society.

There is a busy livestock market on Arenig Street.

Bala Lake is the largest natural lake in Wales. The lake is four miles long and a mile wide, with the town of Bala sitting at its lower, northern end. Natural as the lake is in itself, Thomas Telford raised the level of the lake to support the Ellesmere Canal. The Lake is amongst the hills and takes the water of several rivers, principally the Dee, and is subject to sudden and dangerous floods.

Despite its size, the lake has completely frozen over, most recently in the severe winters of 1947 and 1963.

The rare gwyniad fish is found only in Bala Lake, trapped there at the end of the last Ice Age, some 10,000 years ago. It is now in danger because its natural home is increasingly unsuitable.

According to the 2001 census, 80.1% of Bala's population are able to speak Welsh fluently.

Bala hosted the National Eisteddfod in 1967, 1997, and again 2009. The 2009 Eisteddfod was notable particularly because the chair was not awarded to any of the entrants as the standard was deemed to be too low.[1] 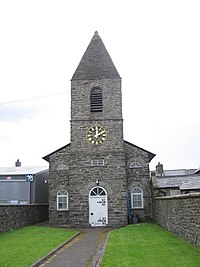 Coleg y Bala is at the top of the hill on the road towards Llyn Celyn. There are several Chapels: notably - Capel Mawr and Capel Bach.