From Wikishire
Jump to: navigation, search
Not to be confused with the Grand Union Canal 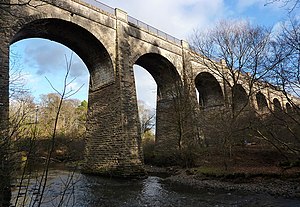 The Union Canal is a canal which extends from Falkirk to Edinburgh, constructed to bring minerals, especially coal, to Edinburgh. It was opened in 1822 and was initially successful, but the construction of railways, particularly the Edinburgh and Glasgow Railway, opened in 1842, diminished its value as a transport medium. It fell into slow commercial decline and became disused in the 1930s.

It shares in the revival of interest in canals generally at the present day, and received a boost when the Millennium Link was completed in 2000, reconnecting it to the Forth and Clyde Canal. It is now in popular use for leisure purposes.

The eastern terminus at Edinburgh Quay

Map of the Union Canal

The Union Canal, with today's length of 31 miles, was built as a contour canal, following the 240-foot contour throughout its length, thereby avoiding the delay due to locks, at the expense of some prodigious civil engineering structures. It was originally 32 miles in length, running to Port Hopetoun basin in Edinburgh from the junction at Falkirk. The Edinburgh terminal was a basin in the space between Semple Street and Lothian Road, south of Morrison Street. The final mile has been truncated and the Edinburgh terminal is now at Lochrin Basin in Tollcross, adjacent to Fountainbridge Street.

The canal has several navigable aqueducts, including the Slateford Aqueduct that takes the canal over the Water of Leith in Edinburgh, the Almond Aqueduct near Ratho and the 810-foot Avon Aqueduct near Linlithgow, the second longest in the United Kingdom.

Priestley describes the route and structures in some detail:

[The] Canal commences from the sixteenth lock of the Forth and Clyde Navigation, about two miles west of Falkirk, in the county of Sterling (sic), whence it takes an eastwardly course on the south side of the above-mentioned town, by some collieries; thence, through Black Hill Tunnel, and across the Glen Water, on which stream, at a short distance to the southward, is constructed a considerable reservoir. Its line hence is by Brighton Freestone Quarries, and about a mile north from Park Hill Colliery, to the Avon River, over which there is an aqueduct conveying the canal at an elevation of 80 feet above the surface of the river. The canal here enters the county of Linlithgow, and passes within a mile and a half on the south side of its capital, to Craighton House, where its course is more southerly and circuitous, to the River Almond, near Clifton House, where it crosses into Edinburghshire, by means of an aqueduct. Its course hence is by Ratho House, and across Leith River, to the city of Edinburgh, where it terminates by a basin at the Lothian Road, about half a mile south-west of the castle. The length of the canal is thirty miles, the depth of water 5 feet, and is on one level from Edinburgh to its western extremity, where it falls 110 feet, in one series of locks, into the Forth and Clyde Canal.[1]

Many of the stone bridges have keystones on which is engraved the number of the bridge: the keystones of Viewforth bridge, the second bridge from the start of the canal at Edinburgh Quay, are emblazoned with the coats of arms of Glasgow and Edinburgh, facing west and east respectively. When new bridges were installed as part of the Millennium Link, no CAD information was available on narrowboats, so the articulated lorries were used to design bends in the approaches to bridges. However, as narrowboats are rigid, some of these bends are very tight and difficult to navigate. 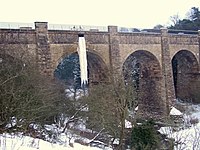 The promoters wished to give access to the minerals of Lanarkshire to Edinburgh, and they obtained an Act of Parliament to build the canal in 1817.

The primary object of this navigation was to effect an inland communication between the cities of Edinburgh and Glasgow; to the former of which it must be essentially serviceable, in consequence of the increased facilities afforded to the transit of lime, coal, stone, &c. which abound in its course.

This undertaking was designed by Mr. Thomas Telford and Mr. Baird, who estimated the cost at £240,468, 17s. 2d.; of which sum £198,650 was subscribed before going to parliament. The first act of parliament ... is entitled, 'An Act for making and maintaining a navigable Canal from the Lothian Road, near the city of Edinburgh, to join the Forth and Clyde Navigation near Falkirk, in the county of Stirling.' The company of proprietors consisted, at the time the first act was obtained, of three hundred and eighty-four persons, amongst whom were the Lord Provost of Edinburgh, Sir William Forbes, Sir John Hay, and Sir John Marjoribanks, who were incorporated by the name of "The Edinburgh and Glasgow Union Canal Company," with power to raise £240,500, in four thousand eight hundred and ten shares, of £50 each, and a further sum of £50,000, either among themselves, by the admission of new subscribers, or on mortgage of the undertaking.[1]

The estimate of cost was evidently inadequate, because a second Act authorised borrowing of £48,100, a third Act of 1821 authorised an increase in share capital of a further £50,000 and a fourth authorised a further £60,000.[1]

Indemnity to Linlithgow and Edinburgh

When the Company got its Act, Linlithgow and Edinburgh petitioned to be compensated for any loss of dues and charges they were accustomed to receive, and also loss of income on the turnpike (toll road).

The Company are directed to indemnify the Magistrates and Town Council of the Royal Burgh of Linlithgow for any Diminution of the Customs upon Cattle, Carriages, or Goods carried over the Avon at Torphichan Mill; also to secure to the Magistrates and Town Council of the City of Edinburgh the Rate of One Penny per Ton on all Goods, Wares, or other Things (except Manure,) shipped or unloaded at any of the Wharfs and Basins, in lieu of certain Rates, Dues, Causeway, Mail, and Petty Customs, which they are now entitled to; as it appears that, by a Charter or Gift of Charles the First, dated 17th May, 1636, the Ministers of Edinburgh are entitled to a Duty or Custom of Thirteen Shillings and Four-pence Scots, upon each Ton or Pack of Goods imported to Edinburgh, Leith, or Newhaven. The Company are therefore directed to pay the same on all Goods which may be imported by this Navigation. They are also bound to indemnify the Edinburgh Road Trustees, the Bathgate, and another Trust, in any Diminution of Tolls arising from these Turnpike Roads, which may be affected by their Canal.[1]

The income from the project was derived from tolls, and charges for wharfage etc. Maximum prices for these were laid down in the Act. The tolls were based on tonnage of the merchandise being conveyed; there was a toll for empty vessels, and this was to be remitted if the vessel returned laden within fourteen days. 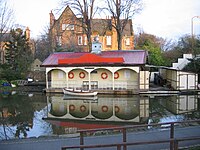 Boathouse where the canal passes near Shandon and Polwarth

In 2004, an archaeological investigation by a team from Headland Archaeology uncovered the stern of a wooden barge 69 feet long.[2] The vessel was discovered on the south bank of the canal between the Leamington Lift Bridge and Viewforth Bridge in Edinburgh. The remains represent the final berth of an early to mid 19th century canal barge or scow, a type of horse drawn vessel that was the main freight carrier of the time. Typical cargoes included coal and lime from Lanarkshire although there were a number of passenger carriers too; the actual function of this vessel is unknown. The vessel was dismantled and removed from the canal in order to record the techniques used in its construction. Additional work will seek to identify the species, age and provenance of the timbers.

The soliton, a form of wave, was first observed on the Union Canal in 1834, while its discoverer John Scott Russell was travelling along the canal in a horse-drawn boat. A modern aqueduct over the Edinburgh City Bypass is named after Russell.

The canal is now used recreationally by canoeists at the Forth Canoe Club and rowers from schools and universities. The Edinburgh Canal Society, the Bridge 19-40 Canal Society and Linlithgow Union Canal Society promote general use of the canal. They hire rowing boats and narrowboats, and they provide regular boat trips on the canal for the general public. Re-Union Canal Boats operate a social enterprise building and maintaining trip boats.

Scottish Canals (as successor to the British Waterways Board in Scotland) have redeveloped the area at the Edinburgh terminal; their publicity states:

Edinburgh Quay is a major regeneration project centred on the site of Lochrin Basin, in the heart of Scotland's capital. It provides around 90 waterfront apartments, 150,000 square feet of offices and 55,000 square feet of retail and restaurant space.[3]

Raft races have become an annual event, having been held in Edinburgh from 2007 to 2011, and using found "junk" material for the rafts. The Linlithgow Union Canal Society has been hosting its cardboard boat race for many years, at Linlithgow Basin.

The Millennium Link, a project to restore both the Union and Forth and Clyde Canals, saw the two canals joined once again at the Falkirk end of the Union Canal, in 2000, by means of the Falkirk Wheel. This route involved a new lock and short tunnel where the canal passes under the Antonine Wall, just before the Falkirk Wheel and a double lock just above.