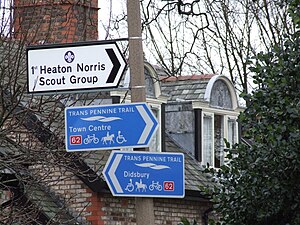 Road signs for the Trail in Stockport

The Trans Pennine Trail is a series of long-distance walking, cycling and riding routes stretching across the width of Great Britain from coast to coast, from Southport in Lancashire to Hornsea in the East Riding of Yorkshire, and north to south from Chesterfield in Derbyshire to Leeds. It is no wild country route: it runs entirely on surfaced paths and using only gentle gradients. It runs largely along disused railway lines and canal towpaths.

The route is part of the National Cycle Network as 'Route 62' (a name referencing the M62 motorway which also crosses the Pennines). 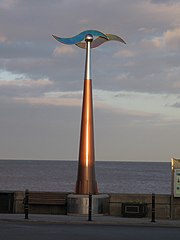 Most of the surfaces and gradients make it a relatively easy trail, suitable for cyclists, pushchairs and wheelchair users. The section between Stockport and Barnsley is hilly, especially near Woodhead,[1] and not all sections or barriers are accessible for users of wheelchairs or non-standard cycles.[2] Some parts are also open to horse riding.

The idea originated from Barnsley, where the head office is now based. Work on the trail started in 1999. Early development was boosted by a £5 million investment by the Millennium Commission. The trail was officially opened in September 2001. However, the route was not fully completed until late 2004. It cost £60 million to construct.

The trail is administered from a central office in Barnsley, which is responsible for promotion and allocation of funding. However, the many local authorities through whose areas the trail runs are responsible for management of the trail within their boundaries.

The main west–east trail starts at Southport on the Lancashire coast.

From Southport the trail heads south through the suburbs of Liverpool, on to Widnes, then crosses the River Mersey into Cheshire and through Warrington's southern suburbs, thence through the Cheshire countryside towards the Mersey again, crossing the river on the new Millennium Footbridge near Stretford and on towards Stockport.

Following up the River Ethrow, it runs out to Hadfield in Derbyshire.

The trail then crosses the Peak District, heading up the Longdendale valley via# the Longdendale Trail to Woodhead, then down into Yorkshire, through Dunford Bridge and Penistone, Doncaster, Selby, Hessle, Hull and Hornsea.

The whole east-west route from sea to sea covers 207 miles. Between Southport and Selby it the National Cycle Network's Route 62 and from Selby to Hornsea, Route 65.

In addition to the coast to coast route, a north–south trail runs from Leeds in the West Riding of Yorkshire and south to and through Wakefield. It then passes through Barnsley and crosses over the main trail in the Dearne Valley area. After that it continues south to Sheffield and the Rother Valley Country Park, where it crosses into Derbyshire, and finally reaches an end in Chesterfield. This route is also part of the National Cycle Network, as Route 67. It is 70 miles long.

The route also has several deviations and loops in the West Riding of Yorkshire, including one to Rotherham, NCN Route 6 and NCN Route 627 south of Penistone. Another 15-mile spur runs from Selby to York, NCN Route 65.

Certificates are handed out for covering different parts of the trail. In order to obtain them, trail users need to collect stamps at various points along the trail.