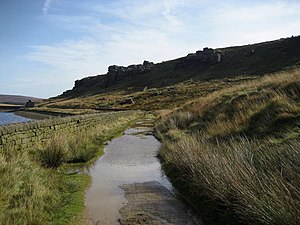 The Pennine Bridleway beside Widdop Reservoir 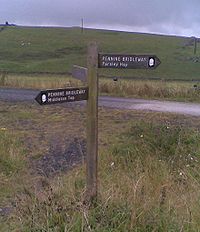 The Pennine Bridleway is a National Trail following the chain of the Pennines from the Peak District of Derbyshire to the Westmorland Fells.

The Pennine Bridleway runs roughly parallel with the Pennine Way but provides access those on horseback and for cyclists as well as walkers. The trail is around 205 miles long,[1] and includes the 47-mile Mary Towneley Loop and the 10-mile Settle Loop.[1] In its southern part, it follows the High Peak Trail along the trackbed of the former Cromford and High Peak Railway.

In 1986 Mary Towneley rode on horseback 250 miles from Corbridge in Northumberland to Ashbourne in Derbyshire to launch the idea of a Pennine Bridleway. This was followed by a feasibility study and route investigation from 1987 to 1990. Finally in 1995 approval was granted for the Pennine Bridleway National Trail from Carsington Water in Derbyshire to Kirkby Stephen in Westmorland.

In 1999 Sport England awarded and donated £1,841,876 towards the route from Derbyshire to Yorkshire and 3 feeder routes from Keighley, Bolton and Penistone. The Pennine Bridleway project team was appointed by the Countryside Agency and work began shortly.

In 2000 there was a proposal for an extension to the Pennine Bridleway from Kirkby Stephen to Byrness in Northumberland. This extension was approved in 2002, but has not yet been funded.

Mary Towneley died in February 2001, and is commemorated by the Mary Towneley Loop, which opened in 2002. The southern section of the Trail from Derbyshire followed, and in 2005 the Settle Loop opened. The final sections of the trail were opened by Martin Clunes in June 2012.[1]

The Pennine Bridleway is not to be confused with the Pennine Cycleway (part of the National Cycle Network) nor the Pennine Way, a separate National Trail. 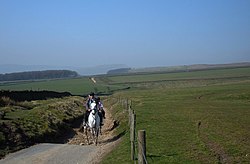 The Pennine Bridleway has two starting points in Derbyshire. The main starting point is at Middleton-by-Wirksworth, from where it follows the High Peak Trail along a disused railway passing through the limestone of the White Peak. The second starting point, recommended for horse riders, is the site of the former Hartington railway station, and uses a short section of the Tissington Trail before joining the High Peak Trail at Parsley Hay.[2] At the end of the High Peak Trail, 4 miles southeast of Buxton, the route heads north following the line of a packhorse road from Tideswell, by way of Peak Forest to Hayfield, where it briefly follows the line of another converted railway, the Sett Valley Trail.

North of Hayfield, the path breaks in two and there is a gap of 5 miles in the bridleway. There are alternative routes for walkers and cyclists, but no safe route for horse riders until the missing section is completed in 2015. A walkers' route continues north while riders head east then north to Charlesworth, near which the two routes cross but do not reunite: walkers go west to cross the River Etherow into Cheshire, then to Holingworth and northwards from there. Riders stay within Derbyshire following roads up to Hadfield on the south side of Longdendale, then enter Cheshire at Bottoms Reservoir near Tintwistle.[3]

The two rourtes reunite at Lees Hill in Cheshire. From here the trail follows the edge of a heather moor and picks up an ancient highway along the Tame valley

North of Mossley following above the Tame, the trail enters the West Riding of Yorkshire, in the parish of Saddleworth, and passes through Uppermill and on to Diggle, both in that parish.

From Diggle, the trail heads west across moorland and descends to follow a dismantled railway towards Hollingworth Lake.

North of Denshaw the trail turns west across moorland and enters Lancashire. It passes to the east of Littleborough before joining the Mary Towneley Loop near Summit.

The Mary Towneley Loop is a ring route in both Lancashire and Yorkshire which may be ridden for itself, or one side or other of the loop may be taken as part of the Pennine Bridleway.

On the Pennine Bridleway, the shorter route follows the Loop anticlockwise, heading north into the West Riding of Yorkshire. The trail passes the villages of Bottomley and Mankinholes, then drops down to cross the Calder Valley just west of Hebden Bridge. It then climbs to cross Heptonstall Moor and enters Lancashire south of Widdop.

The longer, clockwise route of the Loop heads west from Summit and climbs to Top of Leach at 1,555 ft. The trail passes through the town of Waterfoot in the Rossendale Valley and follows new tracks via Lumb before entering the Cliviger Gorge and then climbing up to the Long Causeway. It then heads north to the top of the Loop just east of Worsthorne.

From the top of the Mary Towneley Loop the trail heads north to the village of Wycoller in Lancashire, then turns west back into the West Riding of Yorkshire, passing south of Earby and Barnoldswick. For several miles the Pennine Bridleway follows an old track named Coal Pit Lane to reach Gisburne Park on the River Ribble. It then heads north across the flatter landscape of the Ribble Valley.

At the southern edge of the Yorkshire Dales the route reaches Long Preston on the busy A65 road. The route through Long Preston and across the A65 has not yet been finalised.[3] The trail heads north from Long Preston to the town of Settle. South of Settle the Settle Loop branches east to rejoin the main route just north of the town.

At Stainforth the route turns west to Feizor, Austwick and Clapham on ancient walled lanes. From Clapham the trail turns north east to Selside and crosses to the east side of Ribblesdale. It then joins the Pennine Way for 4½ miles, climbing Cam Fell. A new trail is then followed west over high and exposed terrain to Newby Head. The route briefly enters Westmorland over Dent Fell, then reenters Yorkshire at Garsdale Head.

At the head of Wensleydale the route follows an old track (Lady Anne's Way) to cross into the Mallerstang valley in Westmorland. The trail then crosses Wild Boar Fell to reach its present terminus near the village of Ravenstonedale.[2]

One feeder route has been opened, and two more are planned: