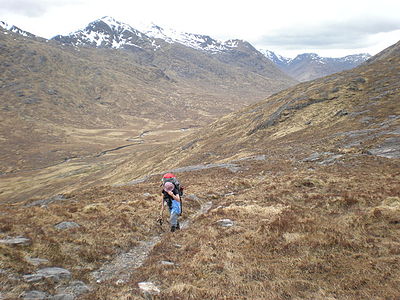 Glen Loyne, on the trail

The Scottish National Trail is a long-distance walking route of 540 miles running the length of Scotland from Kirk Yetholm in Roxburghshire to Cape Wrath on the wild north coast of Sutherland. This is one of the longest of the national trails of the United Kingdom (second only to the 630-mile South West Coast Path). At Kirk Yetholm the trail begins where the Pennine Way concludes, offering the intriguing possibility of a long walk from Derbyshire's Peak District all the way to the cape.

The route was sponsored in its creation by GoreTex and so is also known as the GoreTex Scottish National Trail. It was devised and first walked by the outdoors writer and broadcaster Cameron McNeish, utilising long-established footpaths for much of the distance strung together so as to provide a variety of walking condition becoming progressively more difficult as it heads north. It is not a direct A-Z walk but seeks to showcase some of the finest parts of the north. The walker who manages to reach the heart of the Highlands will be faced with finishing the walk with a tough stretch of backpacking on pathless ways through demanding terrain on the final leg to Cape Wrath. 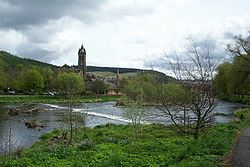 The Tweed at Peebles

The Trail begins at Kirk Yetholm in Roxburghshire, the north end of the Pennine Way close by the Northumberland boundary. From, here it follows part of St Cuthbert's Way northwards to Melrose with its picturesque ruined Abbey, and then traces the course of the Southern Upland Way to Traquair in Peeblesshire, the hilliest of the shires on the Tweed. The route follows the bank of the River Tweed up to Peebles and from here it climbs over the Meldon Hills and across into Midlothian, over the Pentland Hills to reach the outskirts of the City of Edinburgh.

The trail follows along the towpaths of the Union Canal westward to Linlithgow and on towards Falkirk and the Falkirk Wheel, an incredible piece of modern engineering which lifts and lowers laden boats between the Forth and Clyde Canal and the Union Canal 115 feet above. The path takes a dryshod route down to the Forth and Clyde Canal towpaths, and westward to the northern edge of Glasgow and to Milngavie; the start of the West Highland Way that strikes northward. 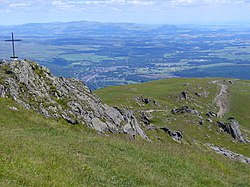 At Drymen in Stirlingshire, the trail moves off the West Highland to follow the Rob Roy Way to Callander, then becoming wilder as it enters Perthshire, to Comrie and over the hills to Aberfeldy and then Pitlochry. From Pitlochry the trail heads north through the Pass of Killiecrankie to Blair Atholl in the north of the county.

North of Blair Atholl is the first true backpacking country. The route heads to Glen Tilt and Glen Feshie through the Cairngorms National Park and on to the great ranges of Inverness-shire. The Corrieyairack Pass takes the trail over the Monadhliath Mountains to Fort Augustus in the Great Glen.

The path follows the Great Glen Way south-westwards for a few miles, rounding the end of Loch Oich then west through Glen Garry to the mountains of Kintail, on the edge of Ross-shire, where the path joins the Cape Wrath Trail. 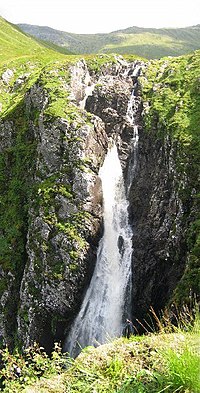 The Cape Wrath Trail provides the rest of the route to the north, and it is a route with a well-deserved reputation for its harsh ruggedness: this is the toughest part of the trail, though with it comes the most dramatic scenery. The path passes the Falls of Glomach, Monar and the Great Wilderness of Letterewe beyond Kinlochewe. The route crosses wild country to Oykel Bridge and then north to Inchnadamph and into Sutherland. A final wild stretch is empty of habitation, until it descends to the sea and the beach at Sandwood Bay. From here a ferry is needed to the Cape Wrath peninsula, and it is a single path up to the final trailhead at Cape Wrath.

The trail is interestingly devised so that the walking becomes harder the further the walker progresses, from the easy meadow walks of the Tweed country to the sheer mountainous haul to Cape Wrath which only hardy backpackers should attempt.

The section through Roxburghshire and Peeblesshire follows a range of established, marked paths and any seasoned walker will enjoy it. Through the Central Lowlands there is much level walking along the canals. Next comes an introduction to what is to come, on the way through Stirlingshire, the path becoming more strenuous as it goes.

The Highlands are what the Highlands ever have been: wild, bleak and tough. Southern Perthshire has its challenges but it is from Blair Atholl that the route takes on the character of the mountains, and it is reckoned that the stretch across the Cairngorms will take three days of hiking and camping, notwithstanding that the paths are well established even if the rivers are unbridged.

The Cape Wrath Trail is a challenge in itself. This crosses some very wild country and appeals most to more experienced walkers and backpackers. Shelter and supplies are irregularly encountered and need advance planning; there are more river crossings which can become impassable in spate conditions. Following the route needs navigation skills and there are many pathless sections.

The trail being relatively new and untested, there are no reliable course records. The devisers reckon five weeks as a reasonable time to take the whole trail in one continuous go.

It is though not a simple route and may better be taken in sections. A guide has been published with logbook to those aiming to complete the whole trail, whether in one or over time. 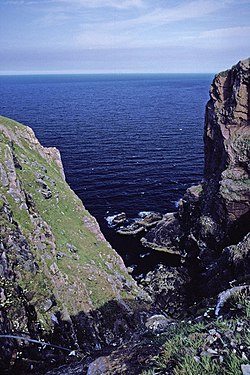