Penistone is a small market town in the West Riding of Yorkshire, with a population recorded in 2001 of 10,101. It stands 8 miles west of the town of Barnsley and 17 miles north east of Glossop, in the foothills of the Pennines; the town centre is at 750 feet above sea level.

The town rises steeply to the highest point in the surrounding area at Hartcliffe Tower and gives stunning views over the wood head bypass and the Dark Peak. The surrounding immediate countryside is mainly rural and lends itself to farming on rich well watered soil on gentle slopes rising to the rugged/bleak moorland just to the west of Penistone. Dry stone walls and small hamlets surrounded by fields and livestock are synonymous with the area. Famous for its rugged Penistone sheep and a strong sense of farming and community spirit, Penistone continues to thrive as an upland market town.

Penistone may be a compound word formed from the Old Welsh roots pen, meaning "end" or "head" or "hill" and the Old English suffix tun, meaning "estate" or "village".

Records of the name as Penstun (1143) and Penstone show that the second element is Old English tun (instead of Old English stan, meaning "stone", as might be suggested. Thus the name "Penistone" means "The town below the hill".

The history of Penistone can be dated back to 1066 when it was known to be owned by Ailric. However, following the Norman Conquest it was razed to the ground in 1069 in what became known as the Harrying of the North; the Domesday Book described the settlement in 1086 as "wasted".

Sir Gyles Penyston (13th century), whose family seat was in Cornwall was styled "of Penyston", denoting that he resided in Penistone; he is an ancestor of the Penyston Baronets.

Sheep sales have been held in the town since before 1699, when the market received a Royal Charter, and the area produced the now rare Penistone sheep.[1]

The town remained small until the coming of the railway in 1845, although several pre-19th century buildings survive. The oldest still standing is 'Penistone Church'. This is the Grade I listed mediæval parish church, St John the Baptist Church. The White Hart pub in the town dates from 1377. Penistone had a market for a long time before its royal charter was granted in 1699, although its historic livestock market was closed recently to make way for town centre re-development. A new landmark building has been built in Penistone for the Market Place. This is an oaken 'Cruck Barn' and was built by Carpenter Oak of Totnes, Devon.

Coming of the railway

Penistone was formerly a major railway junction, including a depot for engineering trains. Much of the former railway infrastructure has since been removed. The town's station is still open, but is now only served by Huddersfield-Sheffield trains on the "Penistone Line". Penistone station was once a well-used interchange with the reputation of being one of the coldest in the country.

The town was formerly served by the Woodhead Line which ran between Manchester (Piccadilly), Hadfield and Sheffield (Victoria) by way of the Woodhead Tunnel. Penistone station was served by express passenger trains on the line. Following major investment (started in 1935 but delayed by the Second World War), the electrification of the railway was completed in 1954; the line's power control centre was built adjacent to Penistone station. This building still stands, but has been converted to alternative commercial use. The Woodhead Line was the first main line railway in the United Kingdom to be electrified, but its once-pioneering 1500 V dc system was ultimately to become non-standard. Penistone station lost its Woodhead Line passenger trains on 5 January 1970, but freight trains (mainly coal trains) continued for a further eleven years. The line was finally (and controversially) closed in 1981 and the track lifted several years later. The route of the old track is now being used as part of the Trans-Pennine Trail.

Recent plans to re-open parts of the Woodhead line as the Don Valley Railway are being taken increasingly seriously by planners, though current plans are from Sheffield to Deepcar/Stocksbridge only and not extending to Penistone. The line would reduce travel time to Sheffield from the current 45 mins to around 15 mins. 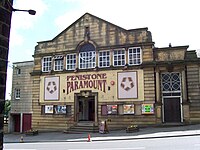 The cinema in Penistone, Penistone Paramount

Penistone Show is an annual agricultural show which draws in crowds from across the county. It is thought to be the biggest one-day show in Yorkshire and is held on the second Saturday in September. As well as ordinary agricultural categories for sheep, cows, goats, and chickens entries are received in horticulture, handicraft, show jumping, pigeons, dogs, photography and many more categories. At the same time, a 10 Kilometre fell race is held (organised by Penistone Footpath Runners' Club), to finish on the Showground.

The annual 'Parade Weekend' has become established as an important time on Penistone's June calendar. The Saturday has two music events on the Showground: a concert of light music in the afternoon and an evening Rock concert. On the Sunday, a major Parade and Gala takes place. The Parade goes through the middle of Penistone and the Gala takes place on the Showground.

The first Penistone Folk Festival occurred in June 2011 in the then new Market Barn. It was one of the first public ventures to happen in the new building. This is now set to be an annual charity event.

Penistone Farmers' Market is a monthly farmers' market on the second Saturday of every month. Local farmers and producers of foods and crafts bring local produce direct to the public. The market is open to all traders selling more than 50% of their own produce and based within a fifty-mile radius of Penistone. The Farmers' Market is held in the market place.

On Yorkshire Day, 1 August 2006, Penistone played host to the now annual gathering of Lord Mayors, Mayors and other civic heads from Yorkshire. The day was marked with a service at Penistone Parish Church, a parade around the town and a meal for invited guests at Penistone Grammar School. Other events included free films and an evening of music at the Paramount Cinema, an exhibition at St John's Community Centre and Hartcliff Tower was open to the public again. There were Morris dancers, a farmers' market, a shop window competition and an historic organ concert at St. Andrew's Church. The day was taken seriously by its organisers and some of the roads on the procession route were resurfaced for the event.