Corbridge is a village in Northumberland, 4 miles east of Hexham and 16 miles west of Newcastle upon Tyne. Corbridge is an ancient town, the northernmost town of Roman ‘’Britannia’’ and the site of one of the earliest churches standing in Britain. 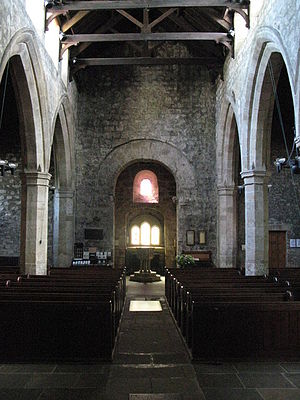 The parish church of St Andrew was built in the seventh century, and it remains essentially the original structure today, making it one of the earliest churches remaining standing and in use in Britain, and one of the finest examples of early Anglo-Saxon architecture that has come down to us.

The church is thought to have been consecrated in 676, built by St Wilfrid at the same time as Hexham Abbey. It has been altered across the centuries; a Norman doorway is still in evidence, as well as a lych gate built in memory of the soldiers killed in the First World War.

The oldest part of the church is the chancel arch, which is a Roman arch, thought to have been brought in the seventh century from an original site at the old, abandoned Roman town and brought and reassembled in Corbridge for the church.

Serving the church is one of only three fortified vicarages in the county. Built in the 14th century, the Vicar's Pele is to be found in the southeast corner of the churchyard, and has walls 4 feet thick. It is a memory of the wicked days of border wars and rievers.

The register for St Andrews dates from 1657. Later on in the town's ecclesiastical history, Wesleyan, Primitive Methodist and Free Methodist chapels were all built too. 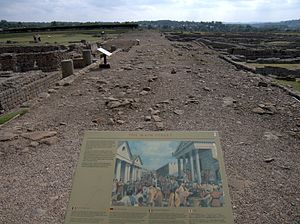 Corbridge stands close by Hadrian’s Wall. The Romans had a town here with a name believed to be Corstopitum or Coriosopitum. Wooden writing tablets found at the site of Vindolanda fort suggest it was known locally as Coria. It was the most northerly town in the Roman Empire, lying at the junction of Stanegate and Dere Street.

The first fort was established around 85 AD, although there was a slightly earlier base nearby at Beaufront Red House. By the middle of the 2nd century, the fort was replaced by a town with two walled military compounds, which were garrisoned until the end of the Roman occupation of the site. The best-known finds from the site include the stone Corbridge Lion and the Corbridge Hoard of armour and sundry other items. In Rudyard Kipling's Puck of Pook's Hill, the town of Hunno on the Wall, is probably based on Corstopitum.

The Romans abandoned their fortifications on the wall possibly in the late fourth century, and by 410 ‘’Britannia’’ had been entirely given up by Rome. In the next century the land was fought over by the native Britons and the incoming English, into whose kingdoms the Corbridge area swiftly fell.

The parish church of St Andrew is believed to have been consecrated in 676. St Wilfrid, who is supposed to have built the church at the same time as Hexham Abbey.

A bridge over the Tyne was built in the 13th century, but this original has not survived. The present bridge, an impressive stone structure with seven arches, was erected in 1674.

Corbridge suffered, as did many other settlements in the county, from the border warfare which was particularly prevalent between 1300 and 1603. Raids were commonplace, and it was not unusual for the livestock to be brought into the town at night and a watch placed to guard either end of the street for marauders.

The reiver days lasted until the union of the crowns of Scotland and England under King James VI and I, who placed both sides of the border under single management until law was imposed.

Stagshaw Bank Fair, traditionally held on 4 July, was one of the most famous of the country fairs. It included a huge sale of stock, and was proclaimed each year by the bailiff to the Duke of Northumberland. Today the Northumberland County Show, an agricultural event, is held in the fields outside Corbridge each year, a very popular rural event, drawing people from all over Northumberland as well as further afield.

The Corbridge Steam Fair and Vintage Rally is held every year in June to celebrate steam engines. There are also classic cars, trucks, tractors and more.