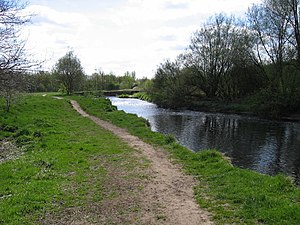 The Tame near Reddish Vale

The River Tame is a river of three counties; principally a border river between Cheshire to the south and Lancashire to the north, though it serves as the border of Cheshire with Yorkshire for a while too.

The Tame rises on Denshaw Moor in the Saddleworth area of the West Riding of Yorkshire.

From the moor, the river it passes through a series of reservoirs down to Denshaw, and south though the Saddleworth villages, through Delph and Uppermill to Greenfield, Yorkshire, below which it runs along the border with Cheshire for a while and then the border between Lancashire (west) and Cheshire (east). The Division Bridge (which spans the river at Mossley), marks the meeting point of Lancashire, Yorkshire and Cheshire.

The Tame marks the Lancashire-Cheshire boundary all the way as it flows though Mossley and down to Stalybridge,where it turns west, and on to Ashton-under-Lyne, Dukinfield, Haughton Green, Denton, Lancashire and Hyde, Cheshire.

At Stockport, the Tame is joined by the River Goyt, and the united river becomes the River Mersey, which marks the county boundary from here to the sea

The 19th century industrial concentrations in the urban areas resulted in the Tame's being a much polluted waterway. As well as industrial pollution from the dyes and bleaches used in textile mills, effluent from specialised paper-making for example cigarette papers, engineering effluents, including base metal washings from battery manufacture, phenols from the huge coal-gas plant in Denton, rain-wash from roads and abandoned coal spoil heaps there was also the sewage effluent from the surrounding population. Up to two-thirds of the river's flow at its confluence with the Goyt had passed through a sewage works.

Efforts to combat pollution efforts of the last thirty years of the 20th century have resulted in the positive fauna distributions.

The name Tame is attached to rivers across the UK in several forms, including Thames, Thame, Taff, and Tamar, alongside two other instances of Tame.[1][2]

The name is Celtic in origin, but the meaning is uncertain.[3][4] Dark river or dark one has been suggested,[5][6] but Ekwall[3] finds it unlikely; Mills suggests it may simply mean river (as does "Avon" and as apparently do "Humber", and "Tyne").[2] The names of the Mersey's co-tributaries Etherow and Goyt are equally ancient and mysterious.[3]

The name of the Mersey is Old English, meaning "Boundary River ". Any earlier name is lost: Dodgson suggests that Tame may have been the name for the whole of the Mersey.[4]

Furthermore, certain tributaries are declared as salmonid waters by statute, and as such have set physical and chemical water quality objectives:

Hull Brook is a "Site of Biological Importance". Hull Brook and Castleshaw Reservoir have populations of White-clawed Crayfish.[7] The river is now clean enough in principle to support otters, but none were found in a survey in 2000–2002.[8]