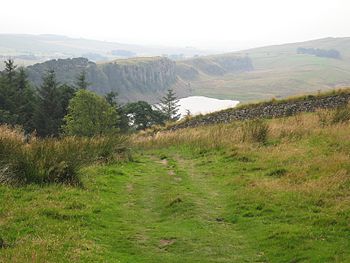 The Hadrian's Wall Path is a long distance footpath running from coast to coast through Cumberland and Northumberland. It runs for 84 miles from Wallsend in Northumberland in the east to Bowness-on-Solway in Cumberland in the west coast. For most of its length it is close to the remains of Hadrian's Wall, the defensive wall built by the Romans on the northern border of their empire, and which is now recognised as a World Heritage Site.

The path was designated a 'National Trail' in 2003.

Though muddy in places, the walking is relatively easy, and the highest point on the path is only 1,130 feet above sea level.[1] For much of its length the path is more or less flat.

Most of the Wall runs through remote countryside but there are sections that pass through the cities and suburbs of Newcastle upon Tyne and Carlisle. The path is well signposted. For most of the walk there are many signs of human activity, and many other walkers in summer. Though there are villages and farms near to the path, there are not many places to buy food and drink, especially in the middle sections. The section between Chollerford and Walton is the highest and wildest part of the path; it is also where the Wall is most visible, and includes several important Roman forts.

From east to west, the path starts by the Swan Hunter shipyard. Before starting the walk it is worth visiting the nearby site of the Roman fort of Segedunum. Most of this section runs through urban areas, including through the center of Newcastle upon Tyne, and along the banks of the Tyne. At last the path emerges into open countryside as it heads for Heddon-on-the-Wall, and here there are occasional glimpses of the Wall.

From Heddon, the path runs through open countryside. The Wall is occasionally visible and the Uallum (earthwork) is frequently visible on the south side. 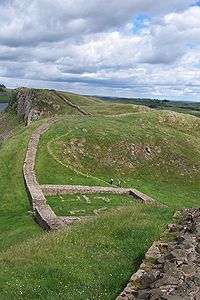 The remains of Milecastle 39 (Castle Nick), a short distance east of Steel Rigg and Peel Crags

West of Chollerford the Roman fort of Chesters is close by the path. The path starts to rise now and the countryside becomes moorland, rather than farmland. Much more of the Wall is visible and parts of it run along the edge of crags, giving superb views over the open countryside to the north. The path passes the Roman fort at Uercovicium (Housesteads), which has been extensively restored and contains much of interest. The Pennine Way long distance path branches off north just after this. The path climbs Steel Rigg.

The Pennine Way joins the Hadrian's Wall Path near the village of Greenhead. The path descends from the wild fell county and entered farmland again, passing more Roman milecastles and reaching farming villages. Its last Northumberland village is Gilsland, after which the path crosses the River Irthing into Cumberland.

Soon after crossing the Irthing is the Roman fort at Birdoswald, which has a museum. As the path approaches Walton, Lanercost Priory is a short walk to the south. Much of the Priory was built with stones taken from the Wall. The name 'Walton' is, just as it sounds, from Wall Village (the Old English weall tun).

The pass crosses over the M6 motorway and down to the valley of the River Eden, which valley it follows to Carlisle, passing through a pleasant park and over a large footbridge to the city.

Carlisle marks the beginning of the merse around the mouth of the River Eden as it prepares to enter the Solway Firth. The path out of Carlisle is nothing to speak of until the town is left behind. The landscape is flat and bleak in poor seasons, but glorious in high summer. The path run alongside the River Eden and then the south bank of the Solway Firth. There is nothing of the Wall to be seen but the walking is open and pleasant.

The path ends in the village of Bowness-on-Solway.

A recommended itinerary breaks the 84-mile walk into six reasonable stages. Presented from east to west (walking in the face of the prevailing wind), this runs:

Both Newcastle and Carlisle are on the national railway network. The start of the walk at Wallsend can be easily reached by taking a local train from Newcastle to the Wallsend Metro Station, and then walking a short distance. The Tyne Valley railway line runs between Newcastle and Carlisle, with stops at Wylam, Corbridge, Hexham, Haydon Bridge, Bardon Mill and Haltwhistle. For most of its length, the line is not within easy walking distance of the Wall. The Wall can also be easily accessed by car, bus or taxi.

There is a Hadrian's Wall bus (service AD122) which runs close to the Wall during the summer. The bus runs between Hexham, Housesteads, Vindolanda and Walltown and Haltwhistle approximately once-hourly, with two journeys per day continuing to Gilsland, Longbyre Village, Birdoswald Roman Fort and Brampton. The service runs daily until 31st August 2014 and Saturdays and Sundays only until 28 September 2014.