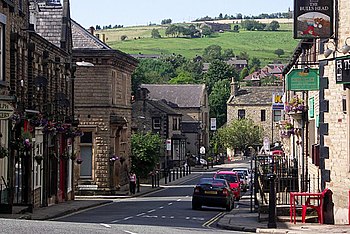 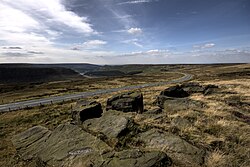 Saddleworth is an area of villages, hamlets and moorland at the western edge of the West Riding of Yorkshire. It has also been constituted a civil parish. Saddleworth's villages lie scattered across beautiful landscape, some in the upper dale of the River Tame and others high on the fell slopes of Saddleworth Moor on the west side of the Pennines.

The largest of the villages of Saddleworth are Uppermill, Greenfield, Dobcross, Delph and Diggle, none of them large, some reflecting the rural ideal of the Yorkshire dales, other reflecting the influence of the suburban spread out of south Lancashire which they border, but all with their charm. The villages of the Tame dale have in past days been industrial centres, which were served by the Huddersfield Narrow Canal passing through here.

To the west of Saddleworth lie the Lancashire town of Oldham and its broad suburbs, while to the east over the moor is Huddersfield. Saddleworth remains broadly rural; its scattered population numbered just 24,351 at the 2001 census, making it one of the larger civil parishes in the United Kingdom but minor compared with the nearby industrial towns.

For centuries the Saddleworth villages produced woollen cloth for which the West Riding's was famous. After the Industrial Revolution, Saddleworth became a centre for cotton spinning and weaving during the 18th and 19th centuries, so much so that by the end of Queen Victoria's reign, mechanized textile production had become a vital part of the local economy. The boom in industry called for greater transport links, including the Huddersfield Narrow Canal and several railways. Much of Saddleworth's architecture and infrastructure dates from its textile processing days however, notably the Saddleworth Viaduct and several cottages and terraces.

For centuries Saddleworth was a chapelry of the Parish of Rochdale, which brought it in the nineteenth century to become part of the new Diocese of Manchester.

There are several brass bands in the parish.

The first documentary evidence of Saddleworth appears in the Domesday Book of 1086 in which it is referred to as "Quick", spelt "Thoac"; where it is described as "Land of the King in Eurvicsire (Yorkshire), Agbrigg Wapentake."

Long before the Domesday Book the villages were built and the names on the landscape reflect a variety of origins. Stone Age man was here, as flint arrowheads testify. A possible Bronze Age bowl barrow is found on the hillsSD98010746. (Excavations found no grave goods or human remains within the barrow.)[1] A Roman road runs through the area and at Castleshaw are the remains of a Roman fort. Saddleworth's place names derive from Welsh, English and Norse.

From Anglo-Saxon times, the area has formed part of the Agbrigg Wapentake of Yorkshire, and so it was recorded in the Domesday Book.

For a time, during the 17th century, Saddleworth constituted a chapelry within the Parish of Rochdale in Salfordshire, which is otherwise entirely in Lancashire. The churches and chapel of Saddleworth, or which there were many, were separated from Rochdale only in 1866. In 1823 it was written that "The Church is a perpetual curacy, in the deanery of Pontefract, value, p.r. £108. Patron, the Vicar of Rochdale".[2] As such, at the creation of the Diocese of Manchester in 1847, Saddleworth was included. In 1866 also a civil parish of Saddleworth was created. In 1872, nevertheless, Saddleworth was recorded to be "a hamlet, a chapelry, a township, and a district, in Rochdale parish and West Riding of Yorkshire".[3] At this time, a post office for the area was found under the name of Uppermill. 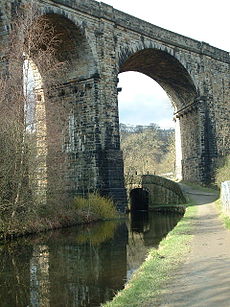 The steep slopes of the Saddleworth area and the acidic soils of the region have never been particularly conducive to intensive farming; meaning that long before the Victorian era, Saddleworth already had a long established, albeit domestic, textile tradition. Small, basic mills had been existent in Saddleworth before the industrial revolution, but these were increasingly replaced by larger more intensive establishments. So much so that by the end of Queen Victoria's reign, mechanized textile production had become a vital part of the local economy.

The boom in industry that had occurred in Saddleworth during the Industrial Revolution called for greater transport links. The Huddersfield Narrow Canal was begun in 1794 at the height of [[Canal Mania, connecting Huddersfield to Stalybridge via Saddleworth and completed seventeen years later in 1811; when the Standedge Canal Tunnel at Diggle was finally opened. The decline of canals and the rise of steam powered locomotives left the canal falling behind the competition, and so it was decided that a railway tunnel would be built parallel to the canal, which was completed in 1848. The rise in traffic demanded a second tunnel be built, completed in 1871. Both of these were single line tunnels and eventually superseded by the 1894 tunnel, a double line tunnel, which is the only one of the three still regularly carrying passengers.

Saddleworth contains a collection of villages and hamlets, including: 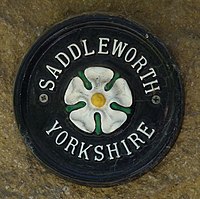 The Saddleworth White Rose Society organises events every Yorkshire Day (1 August) to celebrate Saddleworth's place in the West Riding of Yorkshire. The Prince of Wales referred to Saddleworth's continuing Yorkshire status when he visited the area in 2001 saying "The fact that Saddleworth is still part of the historic West Riding is extremely important".[4]

In 2010, the local Council erected new signs along its boundaries. Those marking the boundary of Saddleworth say 'in the historic County of York' at the top, alongside a white rose.[5] Later in the year, signs were unveiled by local dignitaries at Grains Bar marking the historic border between Lancashire and Yorkshire.[6]

Saddleworth has a large number of annual customs and traditions, many of which are held during Whitsuntide.

On Whit Friday morning, congregations from the churches of all of the Saddleworth villages hold their Walk of Witness and congregate in Uppermill to take part in a church service. Later in the evening, the Whit Friday brass band contests take place. The band contests originated in Saddleworth and the nearby towns of Mossley and Stalybridge and are still centred on the local area. Bands from around the country, and indeed the world, travel to the area annually to compete. Due to the huge popularity of the event, Whit Friday band contests are now held in others of Saddleworth's surrounding villages. In the village of Dobcross a Henry Livings memorial prize is open to bands which play on any of the morning's walks on Whit Friday.

Each year, on the second Saturday and Sunday after August 12 (the old Saddleworth "Wakes Week"), the Saddleworth Rushcart takes place. In 1975 a team of local lads formed the Saddleworth Morris Men and the first modern Rushcart was built for the first festival. This has now become the largest Festival of Morris Dancing in the whole of the United Kingdom.