Hebden Bridge is a small market town in the West Riding of Yorkshire, surrounded by hills deep within the Upper Calder Valley. It is eight miles west of Halifax and 14 miles north-east of Rochdale, at the meeting of the River Calder and the River Hebden (Hebden Water).

The population of the town itself is approximately 4,500. It is a strangely mixed place, with opposite reputations of prosperity and poverty, for while its gorgeous setting and stone-built houses attract many, often communting to the cities, it has an undercurrent of deprivation and drug abuse amongst the young.

Hebden Bridge lies close to the Pennine Way and the well conserved region of Hardcastle Crags and is popular for outdoor pursuits such as walking, climbing and cycling. It lies on the Rochdale Canal which is a through route across the Pennines.

Because Hebden Bridge is in a valley, it has always had problems with flooding. These tend to affect the area between Hebden Water and the cinema on New Road, Brearley Fields in Mytholmroyd, and further up the valley at Callis Bridge by the sewage works and the old Aquaspersions factory. Flooding at Callis Bridge is so frequent that the level of the River Calder has been lowered and special perforated kerbstones fitted so that water can drain back into the river. Brearley is a flood plain but it is also the playing fields for Calder High School and a number of local football, rugby league and cricket teams.

Hebden Bridge suffered two devastating floods in the summer of 2012.[1]

The original settlement was the hilltop village of Heptonstall. Hebden Bridge (originally Heptenbryge) started as a settlement where the Halifax to Burnley hilltop packhorse route dropped down into the valley. The route crossed the River Hebden at the spot where the old bridge (from where Hebden Bridge gets its name) stands.

The steep wet hills and access to major wool markets meant that Hebden Bridge was ideal for water-powered weaving mills and the town developed during the 19th and 20th centuries; at one time Hebden was known as "Trouser Town" because of the large amount of clothing manufacturing.[2] Drainage of the marshland, which covered much of the Upper Calder Valley before the Industrial Revolution, enabled construction of the road which runs through the valley. Prior to this, travel was only possible via the ancient packhorse route which ran along the hilltop, dropping into the valleys wherever necessary, as was the case with Hebden Bridge. The wool trade also brought the Rochdale Canal (running from Sowerby Bridge to Manchester) and the Manchester and Leeds Railway (later the Lancashire and Yorkshire Railway) (running from Leeds to Manchester and Burnley).

Hebden Bridge also grew to include a cinema and substantial council offices. Hebden Bridge also had its own cooperative society. However, during the 1960s, it was defrauded and went bankrupt. The old Co-op building became a hotel and was later converted into flats. The Co-op returned in the 1980s with a supermarket on Market Street, on the site of an old mill.

During the Second World War Hebden Bridge was designated a "reception area" and took in evacuees from industrial cities. Two bombs fell on Calderdale during the war, but they were not targeted, they were merely the emptying of a bomb load.

During the 1970s and 1980s the town saw an influx of artists, writers, photographers, musicians, alternative practitioners, teachers, Green and New Age activists and more recently, wealthier 'yuppie' types. This in turn saw a boom in tourism to the area. During the 1990s Hebden Bridge became a dormitory town, due to its proximity to major towns and cities of the West Riding's urban belt and that of south Lancashire.

Hebden Bridge Town Hall and adjoining fire station is a Grade-II listed building, built in 1897. Following local government reorganisation, it became underused and was eventually given on a long lease to Hebden Bridge Community Association. Substantial volunteer time is now being put into renovation works and fundraising to secure the building’s future.[3] An ambitious project is also under way to build a small enterprise centre and new community facilities on land adjacent to the Town Hall.

The association is member-controlled. More than 450 local people have signed up as friends of the town hall.[4]

Hebden Bridge is a popular place to live. However space is limited due to the steep valleys and lack of flat land. In the past this led to "upstairs-downstairs" houses known as over and under dwellings. These were houses built in terraces with 4–5 storeys. The upper storeys face uphill while the lower ones face downhill with their back wall against the hillside. The bottom two storeys would be one house while the upper 2–3 storeys would be another. This also led to unusual legal arrangements such as the "flying freehold", where the shared floor/ceiling is wholly owned by the underdwelling.

Population changes in the 1990s led to a demand for more houses. This has proved to be extremely controversial for a number of reasons. The limited availability of houses has meant that prices have risen sharply (for example, a house valued at £54,000 in 1998 was valued at nearly £150,000 in 2004).

Demand for new houses is also a contentious issue as many of the sites for proposed development are areas such as fields or woodland that some local residents feel should be left as they are. Hebden Bridge has attracted artists, and has developed a small New Age community.

In April 2005 Hebden Bridge was declared the 4th quirkiest place in the world by highlife (the British Airways flight magazine) and was described as "modern and stylish in an unconventional and stylish way".[5]

The town was documented in the 2009 film Shed Your Tears And Walk Away,[6][7] which made controversial claims about the levels of drug and alcohol abuse in the town, and consequent deaths among young people. 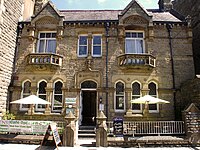 Walkley's Clog Mill is one of the country's leading clog manufacturers. It moved from its original home at Fallingroyd to a site on Midgley Road in Mytholmroyd.[8]

Acre Mill was an asbestos factory in the hilltop settlement of Old Town, owned by Cape Insulation Ltd.[9] It was opened in 1939 to meet the demand for gas mask filters made from blue asbestos during the Second World War, and diversified into the production of other asbestos products, including rope, pipe lagging and textile, after the war. In 1970, the company closed the mill and moved to Westmorland. The mill was the subject of a 1971 World in Action investigation entitled "The Dust At Acre Mill" which revealed how the factory broke the law regarding asbestos-dust control between 1940–1970.[10][11] By 1979, 12% of a total of 2,200 former employees had asbestos-related disease.[12] The mill demolished in 1979. Cape Insulation also operated a second factory at Hangingroyd Mill.

Hebden Bridge has built a reputation for “great little shops” and has an unusually high density of independent shops for a UK town of its size. In a national survey by The New Economics Foundation in 2010 Hebden Bridge was ranked sixth on a diversity scale and was praised for its independent shops and unique shopping experience.[13]

The Arts Festival and Fringe Arts Festival take place every year at the end of June, the traditional Pace Egg plays are an annual Easter event, and the midsummer Hebden Bridge Handmade Parade is a vivid, non-commercial variation on the small town parade.

Hebden Bridge is known as "the lesbian capital of the UK".[14]

The Stubbing Wharf is an 18th-century inn located alongside the Rochdale Canal, in which the poet Ted Hughes set his poem "Stubbing Wharfe".[15] His wife, Sylvia Plath, is buried here in Heptonstall in the secondary graveyard of St Thomas the Apostle church.