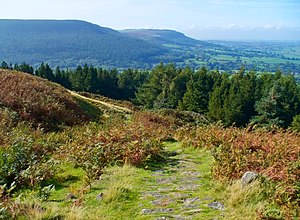 Live Moor on the Cleveland Way

The Cleveland Way is a national trail up and over the Cleveland Hills in the North Riding of Yorkshire. It runs 110 miles from Helmsley, deep inland in Ryedale, to the Brigg at Filey on the North Sea coast, skirting the North York Moors National Park.

Development of the Cleveland Way began in the 1930s when the Tees-side Ramblers' Association pressed for the creation of a long distance path in the north-east of Yorkshire linking the Hambleton Drove Road, the Cleveland escarpment and footpaths on the Yorkshire coast. In 1953 the National Parks Commission took the matter up formally. The trail was officially opened in 1969. It was the second official 'National Trail' in the United Kingdom.[1]

The trail can be walked in either direction, from either of the trailheads, which are at Helmsley (SE6125183849) and Filey (TA1155480742). The trail runs in a horseshoe configuration between them. It is waymarked along its length using the standard National Trail acorn symbol.[2]

The moorland sections of the trail provide a habitat for species including red grouse, curlews and Emperor moth caterpillars. The coastal sections may provide sightings of sea birds such as Great cormorants, Shags, Puffins, Guillemots and Seagulls.[3]

The Cleveland Way connects with various other long distance footpaths. Listed in order from Helmsley to Filey, there are:

Published circular walks along the Cleveland Way include: