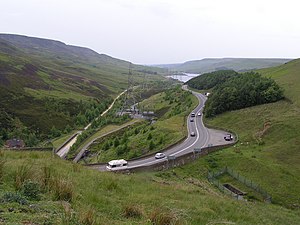 Down Longdendale from above the Woodhead Tunnel 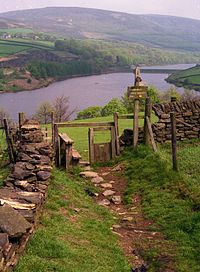 Longdendale is the valley of the River Etherow in Cheshire and Derbyshire which cuts through the north of the Peak District, from the edge of Yorkshire down to the Cheshire Plain. It is a narrow valley, flanked on each side by wind-scoured mountains, but the dale itself is green and pleasant, with the slopes alternately farmed and wooded and the river blue beneath, openining into the Longdendale Chain of man-made lakes.

There are few villages in Longendale, all in Cheshire on the northern side of the dale, strung along the ancient salt route over the Pennines that is now the A628. The southern, Derbyshire side is deserted; the B6105 runs here but to nothing but the fells and a few cottages and down to Glossop.

At the bottom of the dale are Hadfield and Hollingworth either side of the river, and further up on the A628 is Tintwistle, the little "capital" of the dale. Above it is the small village of Crowden.

The dale forms part of the Hundred of Macclesfield.

The eastern part of the dale is within the Peak District National Park and at its very top where the Etherow is a mere beck it meets the border of the West Riding of Yorkshire. Below the dale runs down between the fells to the villages of Crowden and Tintwistle then lower down to Broadbottom, Mottram in Longdendale and Hollingworth. Longdendale forms the easternmost extension of the county palatine of Cheshire.

The River Etherow rises south of Holmfirth and then flows through a chain of six reservoirs known as the Longdendale Chain: Arnfield Reservoir, Bottoms Reservoir, Valehouse Reservoir, Rhodeswood Reservoir, Torside Reservoir and Woodhead Reservoir. There was a seventh reservoir at Hollingworth, but it has now been abandoned.

Below Longendale, the Etherow becomes a tributary of the River Mersey.

The lordship of Longdendale was an ancient feudal estate encompassing the mediæval manors of Godley, Hattersley, Hollingworth, Matley, Mottram, Newton, Staley, Tintwistle and Werneth. The lordship was created by the Earl of Chester in the late twelfth century when he appointed William de Neville was the first Lord of Longdendale.[1] Buckton Castle, near Carrbrook, was probably built by William de Neville in the late twelfth century. One of the privileges of the lordship was to carry out trial by combat. 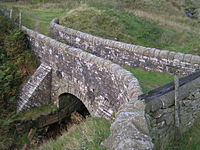 A packhorse route called a saltway was maintained from the Middle Ages onwards for the purpose of allowing the export of salt from the Cheshire wiches of Nantwich, Northwich and Middlewich across the Pennines. The passing trade brought prosperity to settlements along the route. The importance of the salt trade along such saltways is shown by surviving placenames; for example Salter's Brook) is where the saltway forked, with one route leading to Wakefield and another to Barnsley. The stone-built Lady Shaw Bridge still exists at this point, as do the ruins of an old inn. The bridge is just wide enough for a packhorse, though it is suspected that the bridge may have originally been wider and was deliberately narrowed when the Saltersbrook turnpike was built, to prevent vehicles bypassing the toll barrier.

The turnpike road from Manchester to Saltersbrook connected to further turnpikes for Yorkshire destinations and was built in the mid-18th century, based on the older saltway route. 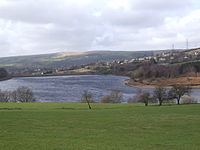 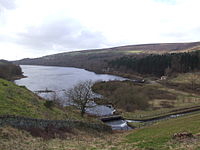 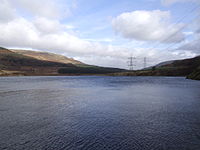 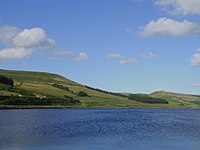 The Etherow has been dammed in Longdendale to produce a series of reservoirs, the Longdendale Chain, in the dale. The Longdendale basin exceeds 30 square miles and has an annual rainfall of 52½ inches. The civil engineer John Frederick Bateman, recognised the potential and conceived a plan to deliver this water to Manchester and Salford, while still maintaining the flow in the River Etherow that was needed to power the mills of Tintwistle and Glossop. The six reservoirs have a capacity of 4,200 million gallons. A tunnel was built at a depth of 200 feet to carry the water from Longdendale into the valley of the River Tame. An Act of Parliament (10 Victoria Cap.cciii) (9 July 1847) was passed to allow the land to be acquired and construction to commence.[2]

The first railway line between Manchester and Sheffield was built between 1839 and 1845, and faced the task of crossing the Pennine Hills. It worked down Longdendale on the south side of the reservoir chain, built by 1,500 navvies; a harsh task and several of the workmen died in the diggings. The wonder of the route is at the top; a three-mile-long double tunnel beneath the fells, the Woodhead Tunnel, which was for a time the longest tunnel in the country.

The Woodhead Tunnel was replaced by a single, larger tunnel in 1954. The first tunnel was subsequently used by Central Electricity Generating Board to reroute the main high-voltage link up the valley and through the National Park underground.

The railway line ceased to be economical, and in 1970 the passenger service ceased, followed in 1981 by the goods service. The passenger service was adversely affected by the requirement to keep the Hope Valley line open, whilst the freight service was affected by the falloff in Trans-Pennine coal traffic. The track was lifted in 1986. There have been plans to re-open the railway at various times since it was closed, but none has gained planning approval. 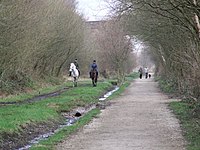 Walking and riding on the Longdendale Trail

After the rail line was closed, the trackbed was taken up and the Longdendale Trail constructed along its route. It is now part of the Trans-Pennine Trail (Sustrans National Cycle Route 62.

The Pennine Way crosses Longdendale, descending from Bleaklow to the south and ascending Black Hill to the north. Black Hill is the highest point of Cheshire.

The youth hostel at Crowden is a traditional stop after the first day's walking from Edale in Derbyshire.

The circular walk known as 'The Longdendale Edges' takes in the high ground (at about the 1000–1500-foot level) on both sides of the valley. It is about 17 miles long and is 'not recommended in doubtful weather'. The detailed route, clockwise from Crowden Youth Hostel, is given in Peak District Walking Guide No.2, published by the Peak Park Planning Board.

Torside Reservoir is home to the Glossop & District Sailing Club.

The valley and the surrounding area has a reputation for strange phenomena, including unexplained lights[3][4] and allegedly supernatural apparitions and has become a centre of attention for UFO and ghost hunters. The sightings are generally dismissed as fanciful, though it has been suggested that the lights may be "earth lights" produced by pressure on the underlying rocks.[3]